The Herschel space observatory has exhausted its supply of liquid helium coolant, essential to cool the observatory’s instruments.

ESA announced earlier today (April 29, 2013) that its Herschel space observatory has exhausted its supply of liquid helium coolant, essential to cool the observatory’s instruments to near absolute zero. This coolant is what has allowed Herschel to observe the cold universe … until today. The event was expected. Herschel started with over 2,300 liters (607 gallons) of liquid helium. The helium has been slowly evaporating since the final top-up the day before Herschel’s launch on May 14, 2008. Confirmation that the helium is finally exhausted came this afternoon at the beginning of the spacecraft’s daily communication session with its ground station in Western Australia, with a clear rise in temperatures measured in all of Herschel’s instruments.

Herschel made over 35,000 scientific observations, amassing more than 25,000 hours of science data from about 600 observing progams. The Herschel telescope images below celebrate just a few highlights of the career of this awesome machine. 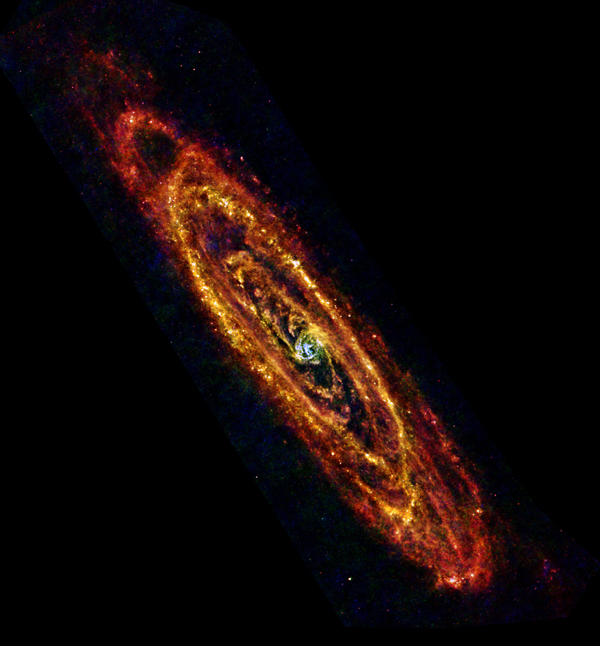 Cool Andromeda. Also known as M31, the Andromeda galaxy is the nearest major galaxy to our Milky Way at a distance of about 2.5 million light-years. The Herschel telescope, sensitive to far-infrared light from cool dust mixed in with gas, was able to seek out clouds of gas where stars are born. This image reveals some of the very coldest dust in the galaxy – only a few tens of degrees above absolute zero – colored red in this image. By comparison, warmer regions such as the densely populated central bulge, home to older stars, take on a blue appearance. Read more about this image here. 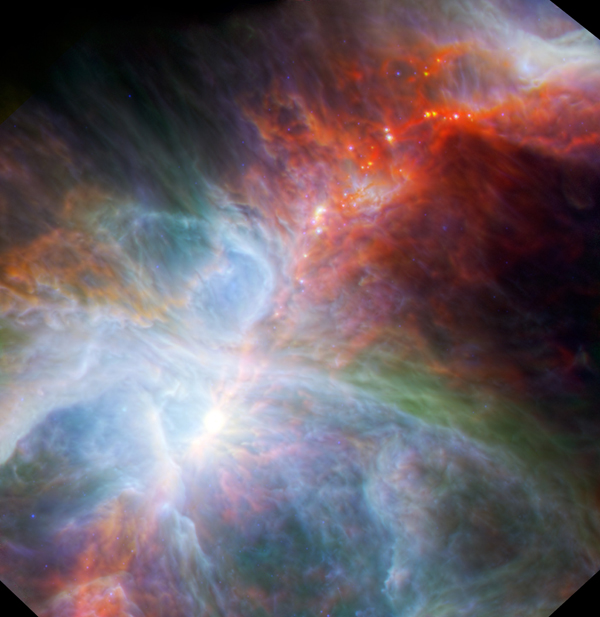 Cool Orion Nebula. This is how the Herschel telescope – working with the NASA’s Spitzer Space Telescope – saw the famous Orion Nebula. The nebula is barely visible to the eye in a dark sky, below the three prominent Belt stars of Orion. The Orion Nebula is a factory for star birth, and this image highlights new stars hidden in the nebula’s gas and clouds. Read more about this image here. 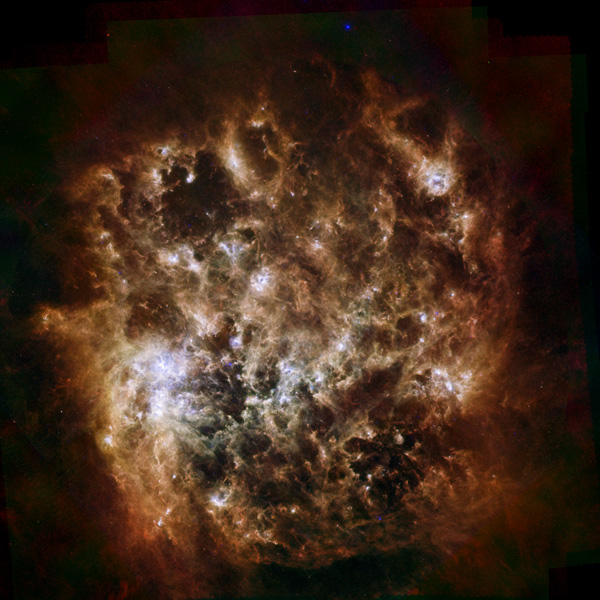 Cool LMC. This image shows the Large Magellanic Cloud – a dwarf galaxy orbiting our Milky Way – in infrared light. The image comes from a collaboration by ESA’s Herschel Space Observatory and NASA’s Spitzer Space Telescope. In the instruments’ combined data, this nearby dwarf galaxy looks like a fiery, circular explosion. Rather than fire, however, those ribbons are actually giant ripples of dust spanning tens or hundreds of light-years. Significant fields of star formation are noticeable in the center, just left of center and at right. The brightest center-left region is called 30 Doradus, or the Tarantula Nebula, for its appearance in visible light. More about this image here. 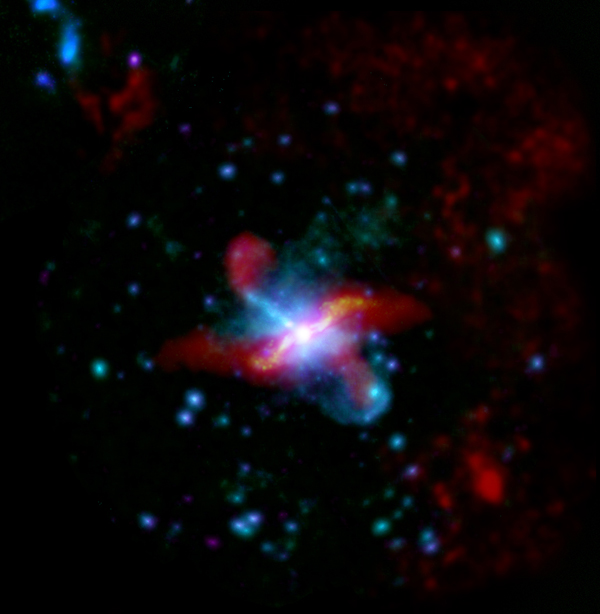 Cool Centaurus A. The peculiar galaxy Centaurus A as seen in longer (cooler) infrared wavelengths and X-rays. Inner structural features seen in this image are helping scientists to understand the mechanisms and interactions within the galaxy, as are the jets seen extending over thousands of light years from the black hole believed to be at its heart. Newly discovered clouds co-aligned with the jets can also be seen in the infrared data, which are colored red and orange. The X-ray image data in this combined picture are shown in blue/cyan/purple and highlight the highly energetic jet region as well as structures that co-align with the infrared and X-ray jet (top left). Read more about this image here.

Professor Alvaro Giménez Cañete, ESA’s Director of Science and Robotic Exploration, paid a final tribute to the Herschel Observatory when he said:

Herschel has exceeded all expectations, providing us with an incredible treasure trove of data that that will keep astronomers busy for many years to come.

The Herschel archive – expected to provide even more discoveries than have been made during the lifetime of the Herschel mission – will become the mission’s legacy.

Bottom line: The Herschel space observatory has exhausted its supply of liquid helium coolant, essential to cool the observatory’s instruments to near absolute zero, allowing Herschel to observe the cold universe … until today. Confirmation that the helium is finally exhausted came this afternoon (April 29, 2013) at the beginning of the spacecraft’s daily communication session with its ground station in Western Australia, with a clear rise in temperatures measured in all of Herschel’s instruments.