Here is the (John) Lennon crater on Mercury

Truman Capote has a crater on Mercury now, too. So does Enrico Caruso … and seven other artists, musicians, painters and authors. 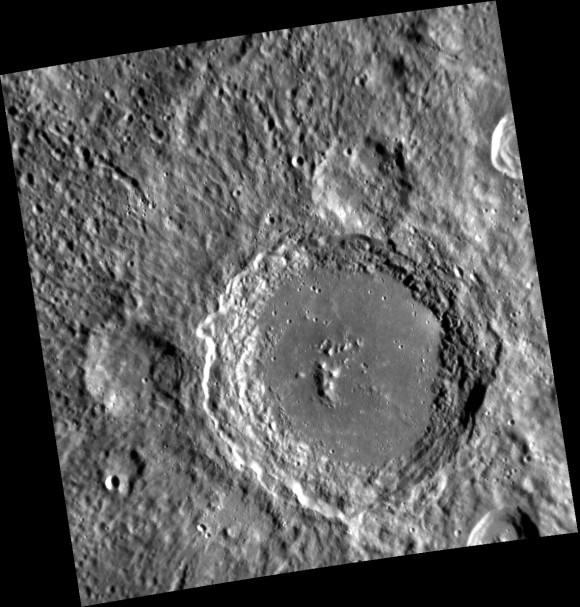 This is the newly named Lennon crater on Mercury, named for John Winston Ono Lennon (1940-1980), a British songwriter, musician, and singer who rose to worldwide fame as a founding member of the Beatles. It’s one of 10 newly named craters on Mercury, recently approved by the International Astronomical Union (IAU), which has taken it upon itself to give official names to planets, moons, their craters and so on since its inception in 1919.

A proposal from the science team of the Mercury MESSENGER spacecraft prompted the new names, which are in keeping with the established naming theme for craters on Mercury. All Mercury craters are named for:

… deceased artists, musicians, painters, and authors who have made outstanding or fundamental contributions to their field and have been recognized as art historically significant figures for more than 50 years.

Calder, for Alexander Calder (1898-1976), an American sculptor best known as the originator of the mobile, a type of kinetic sculpture made with delicately balanced or suspended components that move in response to motor power or air currents.

Capote, for Truman Capote (1924-1984), an American author whose short stories, novels, plays, and nonfiction include the novella Breakfast at Tiffany’s and the true-crime novel In Cold Blood.

Caruso, for Enrico Caruso (1873-1921), an Italian tenor who sang to great acclaim at the major opera houses of Europe and the Americas and appeared in a wide variety of roles from the Italian and French repertoires that ranged from the lyric to the dramatic.

Ensor, for James Sidney Ensor (1860-1949), a Belgian painter and printmaker, considered an important influence on expressionism and surrealism.

Giambologna, for Jean Boulogne Giambologna (1529-1608), a Dutch sculptor known for his marble and bronze statuary in a late Renaissance or Mannerist style.

Remarque, for Erich Maria Remarque (1898-1970), a German author best known for his novel All Quiet on the Western Front, which depicted the horrors of war from the viewpoint of young German soldiers.

These 10 newly named craters join 114 other craters named since the MESSENGER spacecraft’s first Mercury flyby in January 2008. More information about the names of features on Mercury and the other objects in the solar system can be found at the U.S. Geological Survey’s planetary nomenclature web site.