On Clyde Tombaugh’s birthday, newly released images from New Horizons spacecraft showing Pluto and its largest moon, Charon. The craft is now on approach to Pluto!

Now things are about to get exciting! On February 4, 2015 – 109th anniversary of the birth of Clyde Tombaugh, who discovered Pluto in 1930 – NASA released new images of Pluto and its largest moon Charon. The New Horizons’ spacecraft telescopic Long-Range Reconnaissance Imager (LORRI) captured the images this past January 25 and 27. New Horizons was about 126 million miles (203 million km) from Pluto when LORRI acquired the frames to make the first image. The spacecraft was 1.5 million miles (2.5 million km) closer two days later, for the second set of frames. Closer and closer, the spacecraft will finally sweep through the Pluto system on July 14 of this year.

In our lifetimes, the New Horizons mission is the only spacecraft mission directly aimed at Pluto. The spacecraft has been traveling toward Pluto for 9 years; when it was launched, Pluto was still considered a full-fledged planet of our solar system. Hal Weaver, New Horizons project scientist at the Johns Hopkins University Applied Physics Laboratory in Laurel, Maryland, said:

Pluto is finally becoming more than just a pinpoint of light. LORRI has now resolved Pluto, and the dwarf planet will continue to grow larger and larger in the images as New Horizons spacecraft hurtles toward its targets.

Over the next few months, LORRI will take hundreds of pictures of Pluto, against a starry backdrop, to refine the team’s estimates of New Horizons’ distance to Pluto.

As in these first 2015 images, the Pluto system will resemble little more than bright dots in the camera’s view for several more months. Then, late in northern spring, the images will begin to show some detail. The images aren’t just for show. They’re what is known as optical navigation images – or OpNavs. Mission navigators will be using them to design course-correcting engine maneuvers in order to direct the spacecraft for a more precise approach. The first such maneuver is scheduled for March 10.

Closing in on Pluto at about 31,000 mph, New Horizons already has covered more than 3 billion miles since it launched on January 19, 2006.

Its journey has taken it past each planet’s orbit, from Mars to Neptune, in record time, and it is now in the first stage of an encounter with Pluto that includes long-distance imaging as well as dust, energetic particle and solar wind measurements to characterize the space environment near Pluto.

View larger. | A comparison of images of Pluto and its large moon Charon, taken in July 2014 and January 2015. Between takes, New Horizons had more than halved its distance to Pluto, from about 264 million miles (425 million kilometers) to 126 million miles (203 million kilometers). Pluto and Charon are four times brighter than and twice as large as in July, and Charon clearly appears more separated from Pluto. And it’s only going to get better from here. 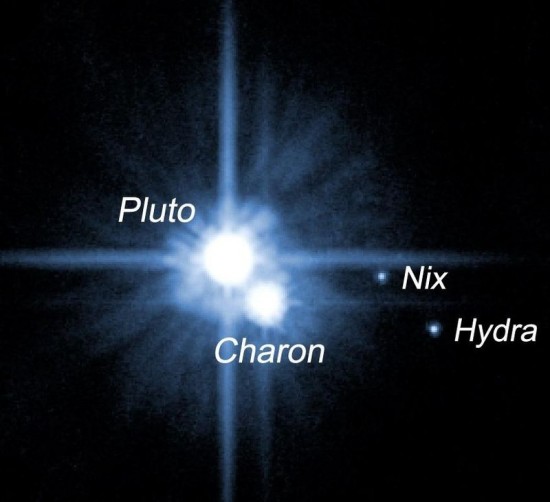 This 2005 image shows Pluto and four of its five known moons. Image via HubbleSite. The images of Pluto from New Horizons can’t match those from Hubble Space Telescope … yet. But ultimately the spacecraft will yield images unsurpassed by any telescope on or above Earth. 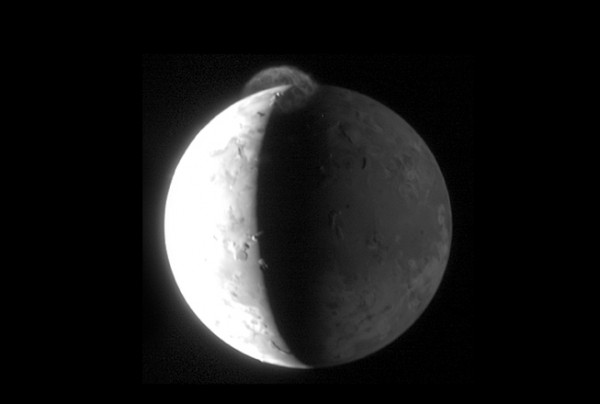 How well will New Horizons see Pluto and its moons as it zips past? Here’s a New Horizons image of Jupiter’s moon Io, taken as it swept past that system in 2007. A sunlit umbrella-shaped dust plume rises 200 miles (300 km) into space from the volcano Tvashtar on Io in this image, which NASA says is one the best images ever of a giant eruption on Io. Image via New Horizons. Click here for more New Horizons images.

Bottom line: On the 109th anniversary of Clyde Tombaugh’s birth (February 4, 2015), the New Horizon’s spacecraft mission has released images of Pluto and the largest of its five moons, Charon. New Horizons will sweep through the Pluto system in July, 2015.