Jets of a black hole known as 4U1630-47 contains heavy particles, such as iron and nickel. It helps explain why black hole jets pack such a wallop.

Astronomers have known for decades that the high-speed jets emanating from black holes contain electrons, which are low-mass particles. These particles within black hole jets are moving at relativistic speeds, that is, a significant fraction of the speed of light. Now a research team has found the first evidence of heavy atoms – iron and nickel – in the jets from a black hole known as 4U1630-47. They say the heavy atoms in the jets of this black hole – and other black holes – would help explain why black hole jets pack such a powerful punch.

The work, led by Dr. Maria Diaz Trigo of the European Southern Observatory (ESO), is published today (November 13, 2013) in the journal Nature.

Black-hole jets recycle matter and energy into space and can affect when and where a galaxy forms stars. Tasso Tzioumis of the Commonwealth Scientific and Industrial Research Organization (CSIRO) in Australia, a member of the research team, said:

Jets from supermassive black holes help determine a galaxy’s fate – how it evolves.

So we want to understand better the impact jets have on their environment. 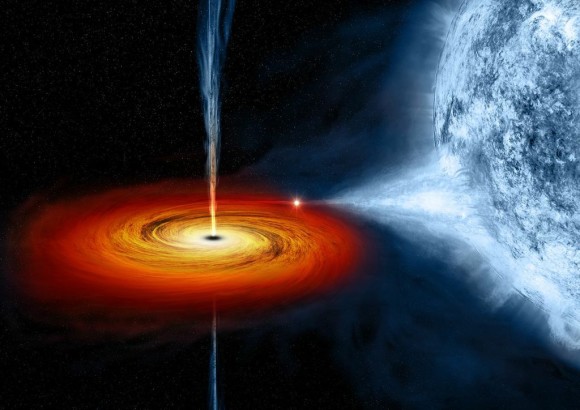 The jets from black holes pack a powerful punch, astronomers say, in part because they contain heavy atoms, such as iron and nickel. This artist’s illustration shows a black-hole system like 4U1630-47: a stellar-mass black hole being “fed” by a companion star. Credit: NASA / CXC / M. Weiss

The discovery also suggests that jets are powered by the black hole’s accretion disk – a belt of hot gas swirling around the black hole – and not by the spin of the black hole itself, which would be more likely to produce jets containing only light particles, these scientists said.

Explaining the idea of jets with a more powerful punch, they said:

An iron atom is about 100,000 times more massive than an electron. When a massive particle is moving it carries more energy than a lighter particle moving at the same speed.

In the past, the peculiar X-ray binary system SS433 was known to have heavy atoms in its jets. But SS433 is not typical. Meanwhile, 4U1630-47 is typical, so these results may extend to the population of black holes at large.

To do their research on 4U1630-47, the team used the European Space Agency’s XMM-Newton space telescope and CSIRO’s Compact Array radio telescope in eastern Australia.

They say a next step would be to look for gamma rays and neutrinos – possibly detectable with current and future telescopes – which should be generated when black holes’ fast-moving jets, containing heavy particles, smash into matter in space.

Bottom line: A team of scientists has evidence that the jets of an ordinary black hole – known as 4U1630-47 – contains heavy particles, such as iron and nickel. If so, and if the same is true of other black holes, it helps explain why black hole jets are so powerful. They are powerful enough to recycle matter and energy into space and can affect when and where a galaxy forms stars.