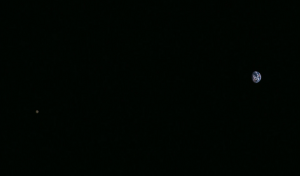 Hayabusa2 used its optical navigation telephoto camera (ONC-T) to capture this view of Earth and the Moon together on November 26, 2015 at 03:46 UT, or 12:46 Japan time. The image is made of three distinct images captured through red, green, and blue filters, and has been processed to align the different-filter images with each other. North is to the left; Asia and Australia are visible on the lit face of Earth. Hayabusa2 was on the way in to its December 3, 2015 flyby of Earth.

Thank you! Your submission has been received!
Oops! Something went wrong while submitting the form.
END_OF_DOCUMENT_TOKEN_TO_BE_REPLACED