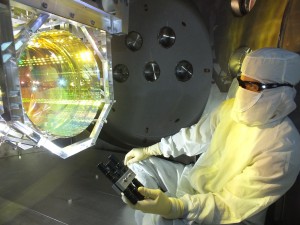 Inspecting LIGO’s optics for contaminants
Prior to sealing up the chamber and pumping the vacuum system down, a LIGO optics technician inspects one of LIGO’s core optics (mirrors) by illuminating its surface with light at a glancing angle. It is critical to LIGO’s operation that there is no contamination on any of its optical surfaces.

Thank you! Your submission has been received!
Oops! Something went wrong while submitting the form.
END_OF_DOCUMENT_TOKEN_TO_BE_REPLACED