Half of all exoplanet host stars are binaries

Yet more evidence that many worlds in our Milky Way galaxy have two suns. 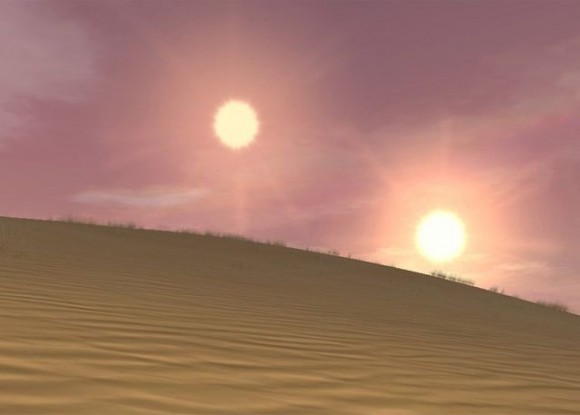 Artist’s concept of a planet with two suns, via the NRCC

The fictional planet Tatooine of the first Star Wars movie provides the classic image of a planet with two suns. On such a planet, nightfall might come only seasonally, and you’d be likely to experience combinations of sunlight, twilight and nightfall far more complex than here on Earth. A new study suggests that planets such as this, with two suns, could be far more common than previously realized.

The study comes from Southern Connecticut State University, where a team of astronomers led by Elliott Horch showed that stars with exoplanets are just as likely to have a binary companion: that is, 40% to 50% of the host stars are actually binary stars.

The NASA Kepler Space Telescope has been incredibly successful at finding exoplanets, that is, planets orbiting distant suns. Kepler has confirmed about 1,000 exoplanets, with thousands more stars considered Kepler objects of interest – stars that might have planets. Plus ground-based studies have confirmed exoplanets. According to the Exoplanet Encyclopedia, there are 1,821 confirmed exoplanets as of September 1, 2014.

It’s long been known that multiple star systems are common in our Milky Way galaxy, with about half the stars in the sky believed to consist of two or more stars orbiting each other. The question has been whether planets can reside in these binaries systems. In recent years, it has appeared increasingly likely that the answer is yes. 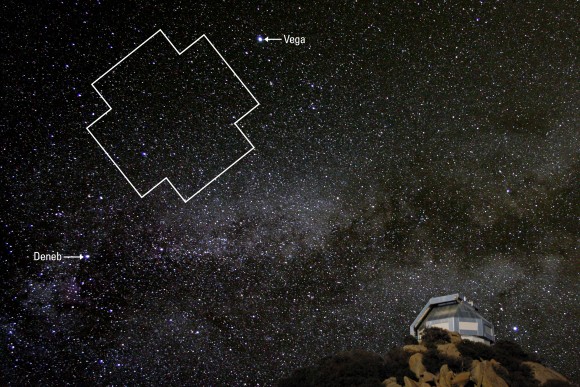 Field of view of the Kepler Space Telescope, between two bright stars in the Summer Triangle. In the foreground, you see the WIYN telescope in southern Arizona.

The new Southern Connecticut State University study used observations carried out on the WIYN telescope at Kitt Peak Observatory in southern Arizona and the Gemini North telescope located on Mauna Kea in Hawaii. The technique used by the team is called speckle imaging and consists of obtaining digital images of a small portion of the sky surrounding a star of interest, 15 to 25 times a second. The images are then combined in software using a complex set of algorithms, yielding a final picture of the star with a resolution better that that of the Hubble Space Telescope.

By using this technique, the team can detect companion stars that are up to 125 times fainter than the target but only 0.05 arcsecond away. For the majority of the Kepler stars, this means companion stars with a true separation of a few to about 100 times the sun-Earth distance.

By noting the occurrence rate of these true binary companion stars, the discoveries can be extended to show that half of the stars that host exoplanets are probably binaries.

Bottom line: Astronomers at Southern Connecticut State University say stars with exoplanets are just as likely to have a binary companion: that is, 40% to 50% of the host stars are actually binary stars.