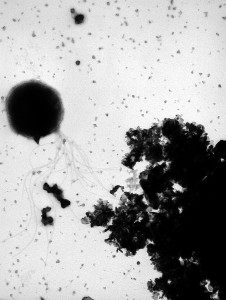 Electron micrograph of heat-loving microorganism, strain 121, which grows and survives at temperatures higher than previously recorded for any form of life. The round organism has tail-like flagella used in propulsion. The black material is the iron on which strain 121 grows. Bar length, 1 µm. Photograph by Kazem Kashefi.

Thank you! Your submission has been received!
Oops! Something went wrong while submitting the form.
END_OF_DOCUMENT_TOKEN_TO_BE_REPLACED