Habitable zone around stars might be larger than we think

Could life survive on a world whose orbit around a distant sun was extremely oblong and eccentric? Such a world would have periods of extreme heat and cold.

Life is various, and it’s inclusive. It includes all sorts of creatures, habitats, ways of surviving, ways of being that we humans can’t really imagine unless we go out, search and make surprising discoveries. For example, who would have imagined prior to 1977 – when Jack Corliss and colleagues unexpectedly discovered communities of living creatures (giant tube woms, clams, shrimp) in and around hydrothermal vents – that life could exist in such an extremely hot environment as an undersea volcano? And yet life does exist in such places. Now astronomers who contemplate life in even more exotic places – planets orbiting distant suns – are wondering if they should expand their thinking about what’s known as the habitable zone around stars.

The habitable zone will be a familiar concept to many. It’s the zone around a star in which water could potentially exist in liquid form. Life as we know it depends on liquid water to survive. Thus, in the search for life, scientists tend to focus on stars’ habitable zones. In a story released by NASA in September 2012, Stephen Kane, a scientist with the NASA Exoplanet Science Institute at the California Institute of Technology in Pasadena, was quoted as saying: 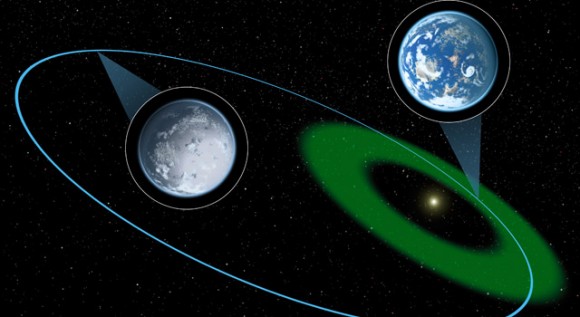 A habitable zone, shown here in green, is defined as the region around a star where liquid water – an essential ingredient for life as we know it – might exist. But can life exist outside this zone? Here, a hypothetical exoplanet is depicted moving through its sun’s habitable zone and then further out into a long, cold winter. At the far part of its orbit, water will freeze at its surface. But could life continue if it hibernated beneath the surface? Image credit: NASA/JPL-Caltech Image credit: NASA/JPL-Caltech

But is this way of thinking about life too narrow? Kane himself believes it might be. He points out that one of the unexpected revelations of planet-hunting has been that “many planets travel in very oblong, eccentric orbits that vary greatly in distance from their stars.” He said:

Planets like these may spend some, but not all of their time in the habitable zone. You might have a world that heats up for brief periods in between long, cold winters, or you might have brief spikes of very hot conditions.

A planet with a very oblong, eccentric orbit would be a very different place from Earth, whose orbit around the sun is almost, but not quite, circular. Still, Kane pointed out:

Scientists have found microscopic life forms on Earth that can survive all kinds of extreme conditions. Some organisms can basically drop their metabolism to zero to survive very long-lasting, cold conditions. We know that others can withstand very extreme heat conditions if they have a protective layer of rock or water. There have even been studies performed on Earth-based spores, bacteria and lichens, which show they can survive in both harsh environments on Earth and the extreme conditions of space. 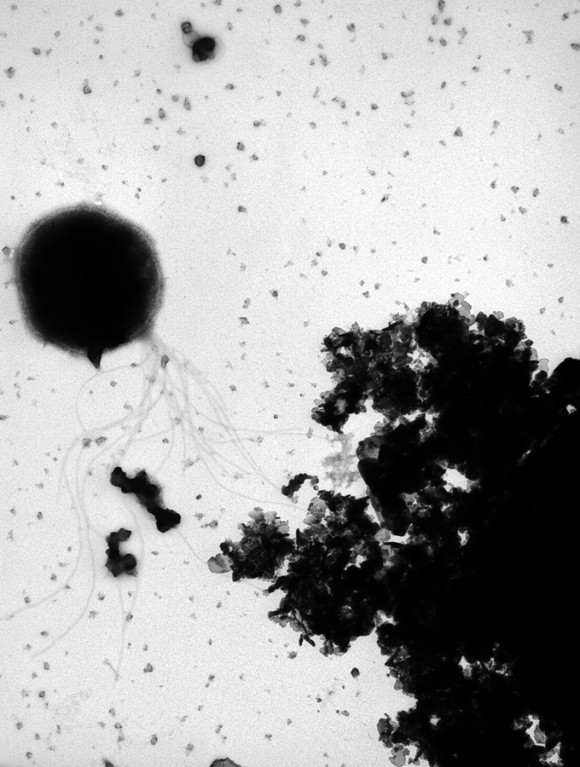 Life in an extreme environment doesn’t always mean extremely cold. This is an exotic earthly creature, seen via electron micrograph. It’s called Strain 121, and it’s a heat-loving single-celled microbe, which grows and survives at temperatures higher than previously recorded for any form of life. Scientists first discovered it 200 miles (320 km) off Puget Sound at the site of an undersea volcano. See its tail-like flagella, used in propulsion? Photograph by Kazem Kashefi via geobacter.org

Kane and Dawn Gelino, also of the Exoplanet Science Institute, have conducted research suggesting that habitable zone around stars might be larger than once thought, and that planets that might be hostile to human life might be the perfect place for extremophiles, like lichens and bacteria, to survive. Read more about their work from NASA.

By the way, Kane and Gelino have also created Habitable Zone Gallery, which will give you an idea of the number of exoplanets known with viable habitable zones, as we’ve always understood them.

Bottom line: Stephen Kane and Dawn Gelino of NASA’s Exoplanet Science Institute have worked to understand the habitable zones around planets orbiting distant stars. They’re now wondering if they and other astronomers who contemplate life on exoplanets should expand their thinking about habitable zones to include planets with very oblong, eccentric orbits. Such planets would be likely to experience extreme heat and cold. Could life survive under such conditions?