A volcano erupting under an immense glacier would have created large lakes of liquid water on Mars in the relatively recent past. And where there’s water, there’s the possibility of life. 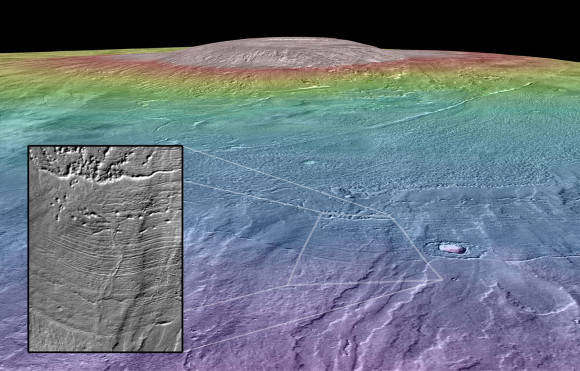 The slopes of a giant Martian volcano, once covered in glacial ice, may have been home to one of the most recent habitable environments yet found on the Red Planet, according to new research led by Brown University geologists.

Nearly twice as tall as Mount Everest, Arsia Mons is the third tallest volcano on Mars and one of the largest mountains in the solar system. This new analysis of the landforms surrounding Arsia Mons shows that eruptions along the volcano’s northwest flank happened at the same time that a glacier covered the region around 210 million years ago. The heat from those eruptions would have melted massive amounts of ice to form englacial lakes — bodies of water that form within glaciers like liquid bubbles in a half-frozen ice cube.

The ice-covered lakes of Arsia Mons would have held hundreds of cubic kilometers of meltwater, according to calculations by Kat Scanlon, a graduate student at Brown who led the work. And where there’s water, there’s the possibility of a habitable environment.

“This is interesting because it’s a way to get a lot of liquid water very recently on Mars,” Scanlon said.

While 210 million years ago might not sound terribly recent, the Arsia Mons site is much younger than the habitable environments turned up by Curiosity and other Mars rovers. Those sites are all likely older than 2.5 billion years. The fact that the Arsia Mons site is relatively young makes it an interesting target for possible future exploration.

“If signs of past life are ever found at those older sites, then Arsia Mons would be the next place I would want to go,” Scanlon said.

A paper describing Scanlon’s work is published in the journal Icarus.

Scientists have speculated since the 1970s that the northwest flank of Arsia Mons may once have been covered by glacial ice. That view got a big boost in 2003 when Brown geologist Jim Head and Boston University’s David Marchant showed that terrain around Arsia Mons looks strikingly similar to landforms left by receding glaciers in the Dry Valleys of Antarctica. Parallel ridges toward the bottom of the mountain appear to be drop moraines — piles of rubble deposited at the edges of a receding glacier. An assemblage of small hills in the region also appears to be debris left behind by slowly flowing glacial ice.

The glacier idea got another boost with recently developed climate models for Mars that take into account changes in the planet’s axis tilt. The models suggested that during periods of increased tilt, ice now found at the poles would have migrated toward the equator. That would make Mars’s giant mid-latitude mountains – Ascraeus Mons, Pavonis Mons and Arsia Mons – prime locations for glaciation around 210 million years ago.

Working with Head, Marchant, and Lionel Wilson from the Lancaster Environmental Centre in the U.K., Scanlon looked for evidence that hot volcanic lava may have flowed in the region the same time that the glacier was present. She found plenty.

Using data from NASA’s Mars Reconnaissance Orbiter, Scanlon found pillow lava formations, similar to those that form on Earth when lava erupts at the bottom of an ocean. She also found the kinds of ridges and mounds that form on Earth when a lava flow is constrained by glacial ice. The pressure of the ice sheet constrains the lava flow, and glacial meltwater chills the erupting lava into fragments of volcanic glass, forming mounds and ridges with steep sides and flat tops. The analysis also turned up evidence of a river formed in a jökulhlaup, a massive flood that occurs when water trapped in a glacier breaks free.

Based on the sizes of the formations, Scanlon could estimate how much lava would have interacted with the glacier. Using basic thermodynamics, she could then calculate how much meltwater that lava would produce. She found that two of the deposits would have created lakes containing around 40 cubic kilometers of water each. That’s almost a third of the volume of Lake Tahoe in each lake. Another of the formations would have created around 20 cubic kilometers of water.

Even in the frigid conditions of Mars, that much ice-covered water would have remained liquid for a substantial period of time. Scanlon’s back-of-the-envelope calculation suggests the lakes could have persisted or hundreds or even a few thousand years.

That may have been long enough for the lakes to be colonized by microbial life forms, if in fact such creatures ever inhabited Mars.

“There’s been a lot of work on Earth — though not as much as we would like — on the types of microbes that live in these englacial lakes,” Scanlon said. “They’ve been studied mainly as an analog to [Saturn’s moon] Europa, where you’ve got an entire planet that’s an ice covered lake.”

In light of this research, it seems possible that those same kinds of environs existed on Mars at this site in the relatively recent past.

There’s also possibility, Head points out, that some of that glacial ice may still be there. “Remnant craters and ridges strongly suggest that some of the glacial ice remains buried below rock and soil debris,” he said. “That’s interesting from a scientific point of view because it likely preserves in tiny bubbles a record of the atmosphere of Mars hundreds of millions of years ago. But an existing ice deposit might also be an exploitable water source for future human exploration.”