A detailed analysis of an image of the gravitational lens SDP.81 has indicated the presence of a dark dwarf galaxy, four billion light-years away. 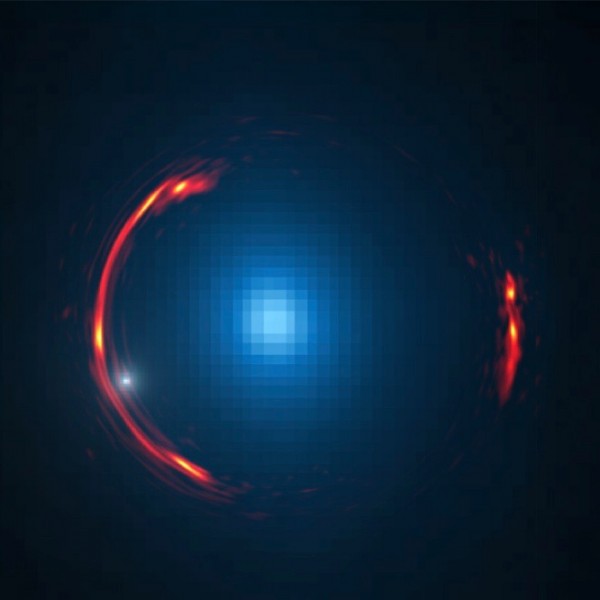 Composite image of the gravitational lens SDP.81. The lensing object – a large quantity of mass between us and a more distant galaxy – is shown here as the blue center object (Hubble optical image). The more distant galaxy is shown in the red arcs (acquired by the ALMA telescope). The white dot near left lower arc segment shows the possible location of a dark dwarf galaxy. Image via Y. Hezaveh, Stanford Univ.; ALMA (NRAO/ESO/NAOJ); NASA/ESA Hubble Space Telescope.

A fascinating area of research in astronomy nowadays is the search for dwarf galaxies containing large amounts of dark matter. A superabundance of dwarf dark galaxies is thought to exist in our universe. They’re thought to be much like our Milky Way’s known satellite galaxies in that they orbit a larger galaxy, but different because they contain substantial amounts of unseen matter, the mysterious dark matter believed to make up much of the mass of our universe. To have so much mass in an unknown form of course tantalizes astronomers. Late last week (April 14, 2016), scientists with the ALMA telescope array in Chile announced their conclusion that they’ve found a dwarf dark galaxy via a gravitational lens. They’re excited because it might mean a new way of studying dark matter in the distant universe, and because it might reveal the presence of more dwarf dark galaxies, which astronomers hope – for the sake of their current theories about the universe – do exist.

A detailed analysis of the image above of the gravitational lens SDP.81 – located some 4 billion light-years away – indicated the little dark galaxy’s presence. The astronomers said in their statement that:

… this discovery paves the way for ALMA to find many more such objects and could help astronomers address important questions on the nature of dark matter.

And it could help them answer questions about dwarf dark galaxies, which have so far proven difficult to find.

ALMA_StrongLensing_SDP81_NRAO from NRAO Outreach on Vimeo.

In 2014, as part of ALMA’s Long Baseline Campaign, astronomers studied a variety of astronomical objects to test the telescope’s new, high-resolution capabilities.

One of these experimental images was that of an Einstein ring, which was produced by the gravity of a massive foreground galaxy bending the light emitted by another galaxy nearly 12 billion light-years away.

Astronomer Yashar Hezaveh at Stanford University in California and his team conducted a detailed analysis of this image and found signs of a hidden dwarf dark galaxy in the halo of the closer galaxy (the lens itself, shown in the image at the top of this post as a blue object). Hezaveh said:

We can find these invisible objects in the same way that you can see rain droplets on a window. You know they are there because they distort the image of the background objects.

In the case of a raindrop, the image distortions are caused by refraction. In this image, similar distortions are generated by the gravitational influence of dark matter. The astronomers’ statement said:

Current theories suggest that dark matter, which makes up about 80 percent of the mass of the universe, is made of as-yet-unidentified particles that don’t interact with visible light or other forms of electromagnetic radiation. Dark matter does, however, have appreciable mass, so it can be identified by its gravitational influence.

For their analysis, the researchers harnessed thousands of computers working in parallel for many weeks, including the National Science Foundation’s most powerful supercomputer, Blue Waters, to search for subtle anomalies that had a consistent and measurable counterpart in each ‘band’ of radio data.

From these combined computations, the researchers were able to piece together an unprecedented understanding of the lensing galaxy’s halo, the diffuse and predominantly star-free region around the galaxy, and discovered a distinctive clump less than one-thousandth the mass of the Milky Way.

Because of its relationship to the larger galaxy, estimated mass, and lack of an optical counterpart, the astronomers believe this gravitational anomaly may be caused by an extremely faint, dark-matter dominated satellite of the lensing galaxy.

According to theoretical predictions, most galaxies should be brimming with similar dwarf galaxies and other companion objects. Detecting them, however, has proven challenging.

Even around our own Milky Way, astronomers can identify only 40 or so of the thousands of satellite objects that are predicted to be present.

Neal Dalal of the University of Illinois, a member of the team, said:

This discrepancy between observed satellites and predicted abundances has been a major problem in cosmology for nearly two decades, even called a ‘crisis’ by some researchers.

If these dwarf objects are dominated by dark matter, this could explain the discrepancy while offering new insights into the true nature of dark matter.

Read more about this study via NROA

Bottom line: Astronomers who scrutinized an image of the gravitational lens SDP.81 have announced the presence of a dark dwarf galaxy, four billion light-years away.