Got something to say to an alien? Lone Signal can beam your message

Their new website launched today, so you can be among the first to compose a message to a distant civilization.

A group of scientists and entrepreneurs – led by Dr. Jacob Haqq-Misra – is now crowd sourcing the search for extraterrestrial civilizations. The Lone Signal Project launched earlier today (June 18, 2013) and is now asking people from around the world to submit their messages, which will be beamed to a nearby star in our galaxy. This red dwarf star is Gliese 526, located in the direction of the constellation Bootes, one of the closest stars to Earth at an estimated 17.6 light-years away. This system has been identified as a solar system, with possible planets that meet the requirements for habitability.

You can now participate by sending a message/photo via text, to be transmitted toward this star. You can send one free text or Twitter-sized message — a 144-characters. After that, you can send more messages, and longer messages, for a price.

The service will also allow you to track the progresses of the messages, as they travel across space for 17.6 years before reaching Gliese 526.

Image via Lone Signal. What would you say to an alien civilization?

Attempts to contact civilizations on other worlds are controversial. All efforts before this one have consisted of one-time bursts of info beamed into space. The first one was in 1974, when astronomers at the Arecibo Observatory beamed a message toward the globular star cluster M13, which is 25,000 light-years from Earth. Lone Signal is aiming its messages much closer to home.

The first is Lone Signal’s hailing message, a binary code message created by planetary scientist Michael W. Busch. Much like other messages beamed spaceward, it contains basic information about us earthlings, indicating, for example, our knowledge of basic physics and the chemical elements. It also explains Earth’s position in the universe.

The crowd sourced messages beam toward Gliese 526 on an adjacent channel. 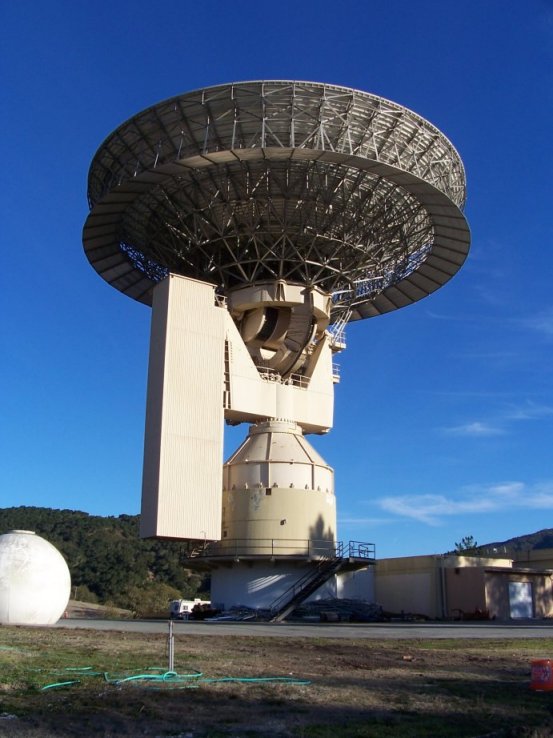 The Lone Signal will be hailing aliens, sending as many individual messages as it can, via the recommissioned radio dish at the Jamesburg Earth Station in Carmel, California.

So become a beamer, yourself, if you want to. As explained in a nice long article by Nancy Atkinson at UniverseToday.com, you’ll then be able to:

• Share Beams / Track Beams – Once signed in, users can see how far their beam has traveled from Earth as well as share it with the beaming community.

• Dedicate Beams – Parents, friends and loved ones can dedicate a beam to others.

• Explore – The Explore section gives beamers current data on the Lone Signal beam, who is sending messages, from where on Earth, overall stats, etc.

• Blog / Twitter – Via their blog and Twitter, the Lone Signal science team and other contributors will be posting opinion articles on associated topics of interest as well as sharing the latest science news and updates.

One you submit your “beam” you’ll be able to “echo” it on your Facebook and Twitter accounts.

This crowd sourcing effort for contacting extraterrestrials, the first of its kind, is sure to make some people nervous, while making others happy. Sound good to you? Or not? Tell us what you think of this idea in the comments below.

In the meantime, I had fun this morning thinking about what I would say if I decided to beam a message to Gliese 526. I think I’d have to go back to a line I loved from the song Wooden Ships by Jefferson Starship:

How about you? What would you / will you say?

Bottom line: On June 18, 2013, the Lone Signal Project began a new crowd sourcing effort to search for alien life in our galaxy. They are accepting 144-character (or longer) messages from individuals who have something to say to an extraterrestrial civilization. They’ll beam these messages toward the red dwarf star Gliese 526, a possible solar system, located 17.6 light-years away.