NASA’s Lunar Reconnaissance Orbiter has returned some amazing high-resolution photos of the surface of the moon, including these ones of steep cliffs and impact melt inside a young crater called Giordano Bruno. 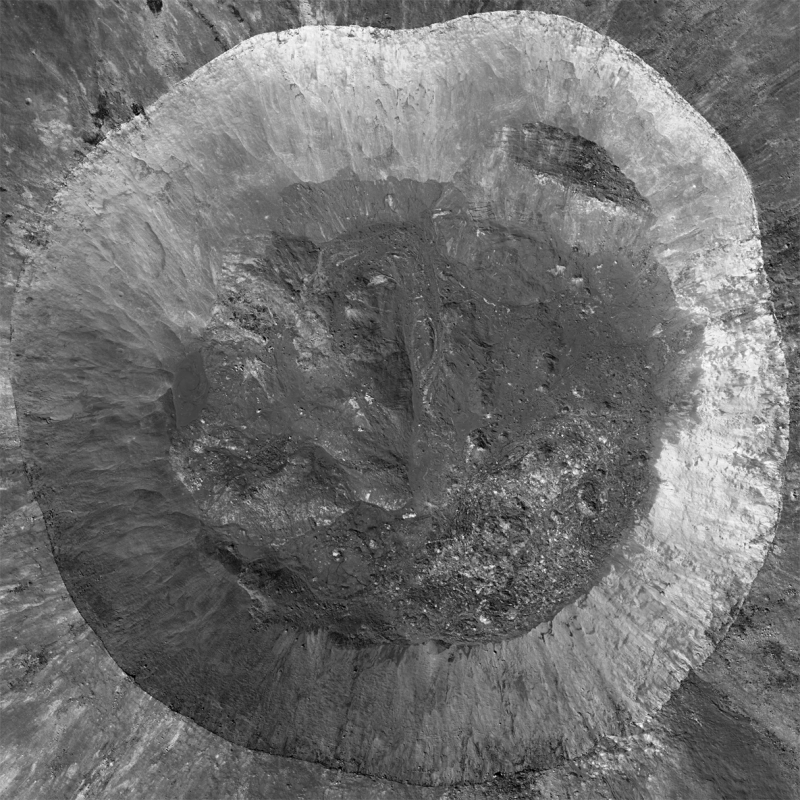 You might think of the moon as gray, rocky and dusty, a bleak and desolate world. But in fact, the moon is a beautiful place in its own way, and does offer some incredible scenery with its many craters and mountains. This view inside a crater from NASA’s Lunar Reconnaissance Orbiter (LRO) is a great example, and as the article title says, spectacular.

The stunning view inside a young crater in the top image shows how otherworldly yet starkly and serenely majestic the moon can be.

These photos were taken by LRO in August 2017, from an altitude of 70 miles (113 km). Giordano Bruno Crater is one of the youngest large craters on the moon, 13 miles (21 km) in diameter, and located at 35.97 degrees north latitude, 102.89 degrees east longitude. There is a lot of surface brightness (albedo) contrast visible, as the sun was high above the horizon at the time, and the only shadows seen are from steep cliffs and large boulders.

The steep cliff – the inside wall of the crater – rises a staggering 9,843 feet (3,000 meters) above the bottom of the crater, where you see a large melt pool of ancient liquified rock, left over from the huge impact that created the crater. Can you imagine yourself standing there and gazing up at this massive crater wall in front of you? 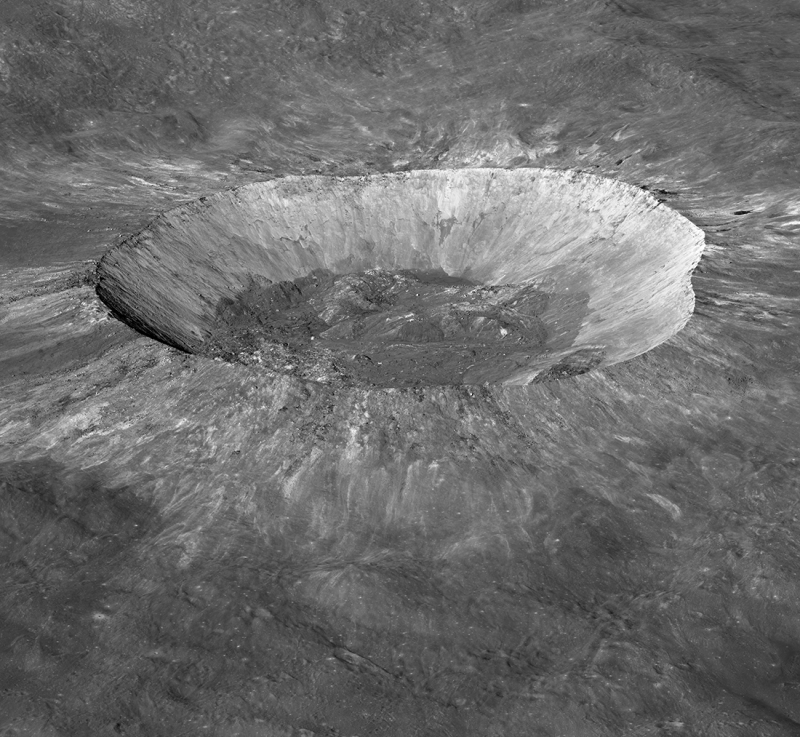 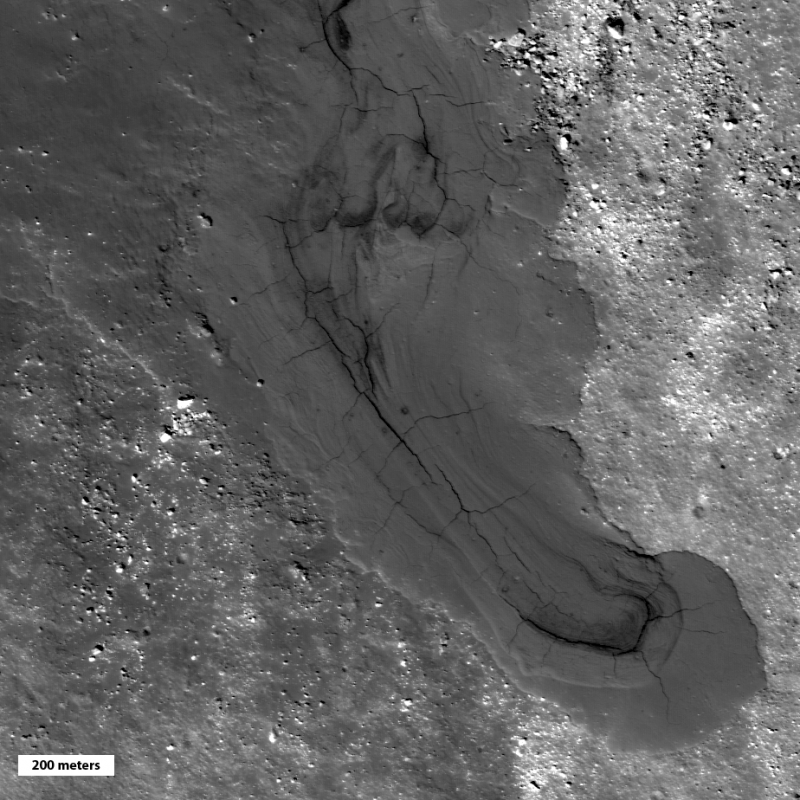 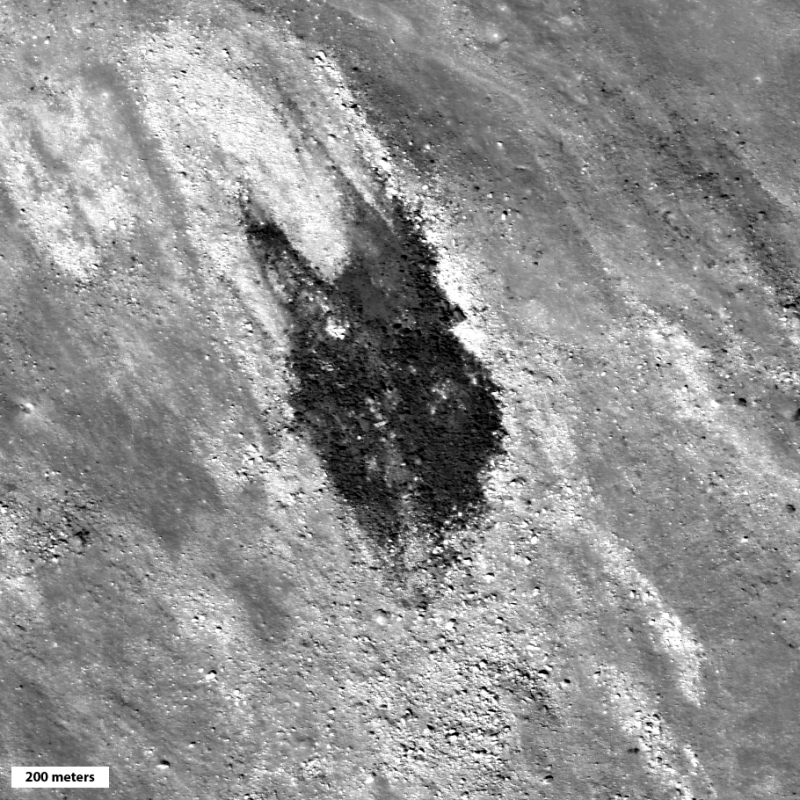 Dark rubbly material on the bottom of Giordano-Bruno-Crater. Image via NASA/GSFC/Arizona State University/LROC. 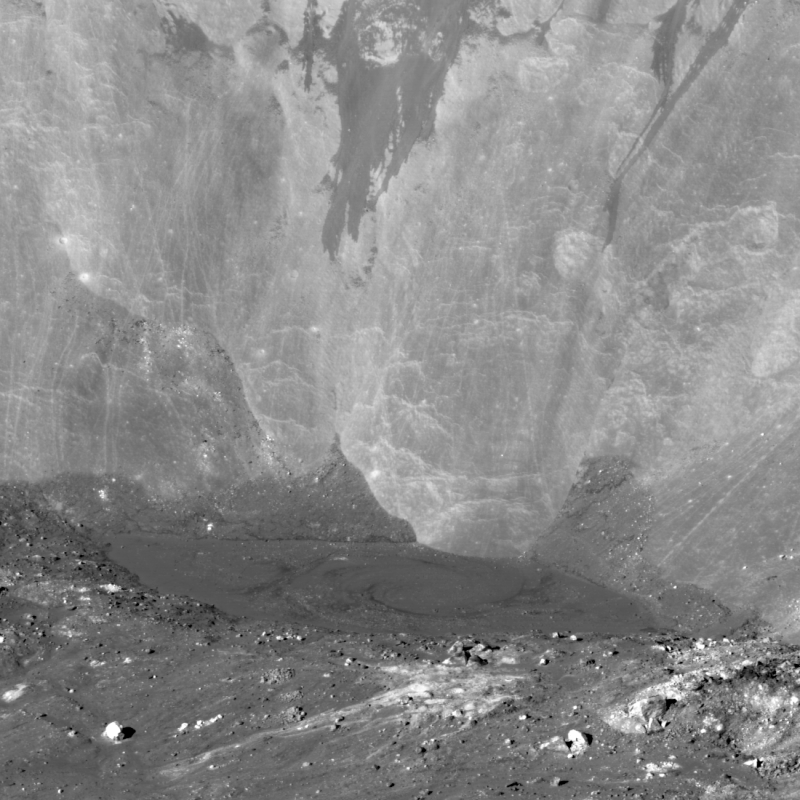 Close-up view of a steep cliff on the inside crater wall of Giordano Bruno Crater, as seen by Lunar Reconnaissance Orbiter (LRO) in August 2017. Image via NASA/GSFC/Arizona State University/LROC.

The impacts that create craters like these are powerful. Here, a large rocky asteroid or meteor – up to 1.2 miles (2 km) in size – slammed into the moon about ten times faster than a speeding bullet. As typically happens, the impacting rock created a hole in the ground much larger than the rock itself. A tremendous amount of heat and pressure are released during the impact, which melts a lot of the rock. This created a temporary pool of melted rock – the melt pool – which sloshed and flowed, almost like water. Over time, the melted rock cooled and solidified, leaving the darker-colored melt pool we see today. You can still see where the melted rock flowed across the crater floor, filling depressions.

There is also some interesting dark, rubbly material on the bottom floor of the crater, which may be from basaltic dikes or perhaps impact melt glass, called impactite. Could it be similar to what China’s Yutu-2 rover recently found on the far side of the moon?

It isn’t known yet exactly how old the crater is, but the well-preserved forms of the impact melt flows and the sparsity of other smaller craters inside it show that it is quite young geologically-speaking, probably less than 10 million years.

Some of the LRO images of this crater have a pixel scale as small as 1.6 to 1.8 meters (5.5 to 6 feet). When in its lowest orbit, LRO obtained images of the crater with an impressive resolution of 50 centimeters (20 inches).

LRO was launched on June 18, 2009, and has been returning a wealth of science data ever since, as well as stunning views like these. 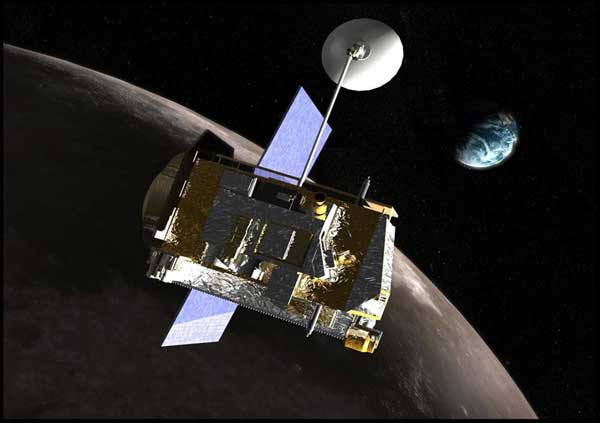 Artist’s illustration of the Lunar Reconnaissance Orbiter (LRO) near the moon. Image via NASA.

Bottom line: This is a spectacular view inside a younger crater on the moon, as seen by NASA’s Lunar Reconnaissance Orbiter.