The Hubble Space Telescope has detected superhot blobs of gas, each twice as massive as the planet Mars, being ejected near a dying star. 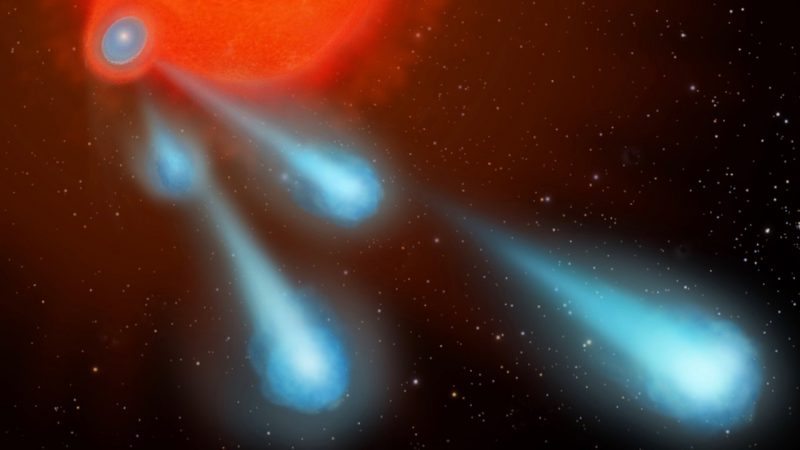 Artist’s concept of how the binary star system V Hydrae is launching balls of plasma into space. Image via NASA, ESA, and A. Feild (STScI).

NASA said on October 6, 2016 that – somewhere near the star V Hydrae, a bloated dying giant star, some 1,200 light-years from Earth – something is emitting giant superhot blobs of gas, hurtling them through space so fast that they’d travel the distance from Earth to our moon in only 30 minutes. The Hubble Space Telescope detected the gas balls, each of which are twice as massive as the planet Mars. NASA said this high-speed “cannon fire” has continued once every 8.5 years for at least the past 400 years, according to the estimates of the team that discovered it.

The team has published its results in the peer-reviewed journal called The Astrophysical Journal (August, 2016, issue).

V Hydrae, a red giant star near the end of its life, has probably shed at least half of its mass into space already, after exhausting the nuclear fuel that makes it shine. Astronomers are very familiar with V Hydrae’s type of star, but they’ve never seen anything like this before, and they know the ejected material could not have been shot out by the host star itself. NASA said:

The current best explanation suggests the plasma balls were launched by an unseen companion star. According to this theory, the companion would have to be in an elliptical orbit that carries it close to the red giant’s puffed-up atmosphere every 8.5 years. As the companion enters the bloated star’s outer atmosphere, it gobbles up material. This material then settles into a disk around the companion, and serves as the launching pad for blobs of plasma, which travel at roughly a half-million miles per hour.

Raghvendra Sahai of NASA’s Jet Propulsion Laboratory in Pasadena, California is lead author of the study. He and his team are linking this star system and its mysterious “cannonballs” to the glowing shapes seen around dying stars known as planetary nebulae. A planetary nebula is an expanding shell of glowing gas expelled by a star late in its life. Sahai said:

We knew this object had a high-speed outflow from previous data, but this is the first time we are seeing this process in action. We suggest that these gaseous blobs produced during this late phase of a star’s life help make the structures seen in planetary nebulae. 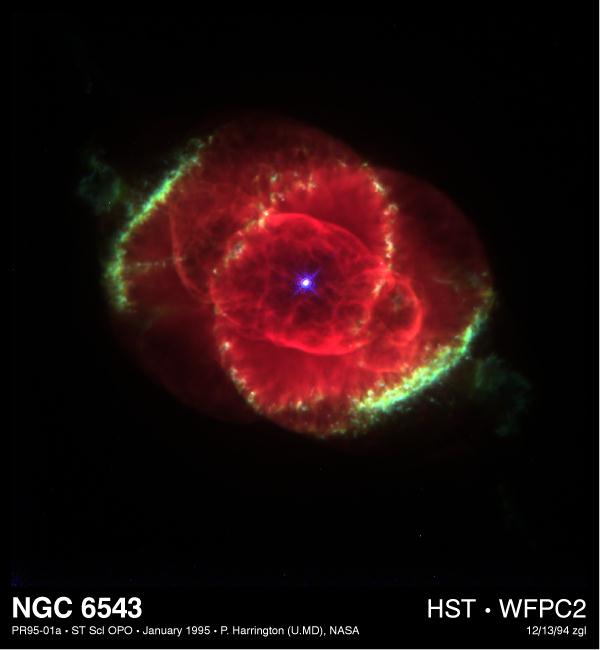 Hubble observations over the past 2 decades have revealed an huge complexity and diversity of structure in planetary nebulae. This is an X-ray/optical composite image of the Cat’s Eye Nebula (NGC 6543). Image via HST’S Greatest Hits. 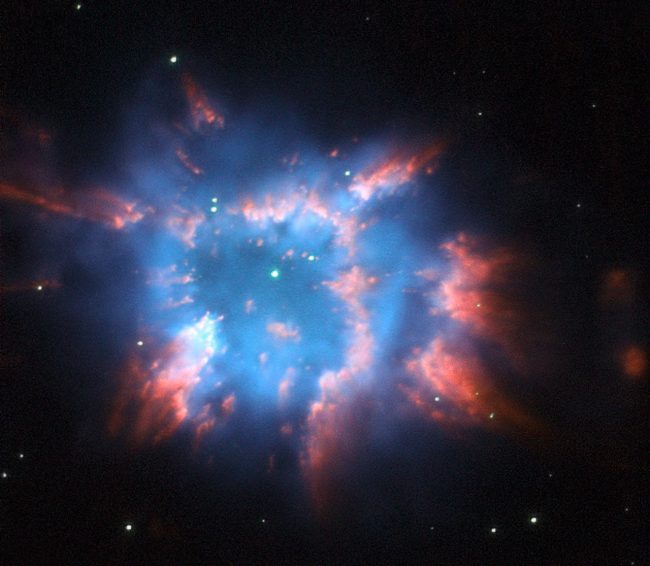 Here’s another NGC 6326, whose glowing wisps of outpouring gas are lit up by a binary central star. Image via ESA/Hubble and NASA.

In the past, Hubble had captured knots of material in the glowing gas clouds of planetary nebulae, which are known to be associated with dying stars. Astronomers speculated that these knots were actually jets ejected by disks of material around companion stars that were not visible in the Hubble images.

But the details of how these jets were produced remained a mystery. Sahai said:

We want to identify the process that causes these amazing transformations from a puffed-up red giant to a beautiful, glowing planetary nebula. These dramatic changes occur over roughly 200 to 1,000 years, which is the blink of an eye in cosmic time.

Sahai’s team used Hubble’s Space Telescope Imaging Spectrograph (STIS) to conduct observations of V Hydrae and its surrounding region over an 11-year period, first from 2002 to 2004, and then from 2011 to 2013. NASA explained:

Spectroscopy decodes light from an object, revealing information on its velocity, temperature, location and motion.

The data showed a string of monstrous, superhot blobs, each with a temperature of more than 17,000 degrees Fahrenheit (9,400 degrees Celsius) — almost twice as hot as the surface of the sun. Sahai said:

The observations even showed giant structures as far away as 37 billion miles (60 billion km) away from V Hydrae, more than eight times farther away than the Kuiper Belt of icy debris at the edge of our solar system is from the sun.

The blobs expand and cool as they move farther away, and are then not detectable in visible light. But observations taken at longer, sub-millimeter wavelengths in 2004, by the Submillimeter Array in Hawaii, revealed fuzzy, knotty structures that may be blobs launched 400 years ago, the researchers said.

Based on the observations, Sahai and his colleagues Mark Morris of the University of California, Los Angeles, and Samantha Scibelli of the State University of New York at Stony Brook developed a model of a companion star with an accretion disk to explain the ejection process. Sahai said:

This model provides the most plausible explanation because we know that the engines that produce jets are accretion disks.

We think this model has very wide applicability.

The team hopes to use Hubble to conduct further observations of the V Hydrae system, including the most recent blob ejected in 2011. The astronomers also plan to use the Atacama Large Millimeter/submillimeter Array (ALMA) in Chile to study blobs launched over the past few hundred years that are now too cool to be detected with Hubble. 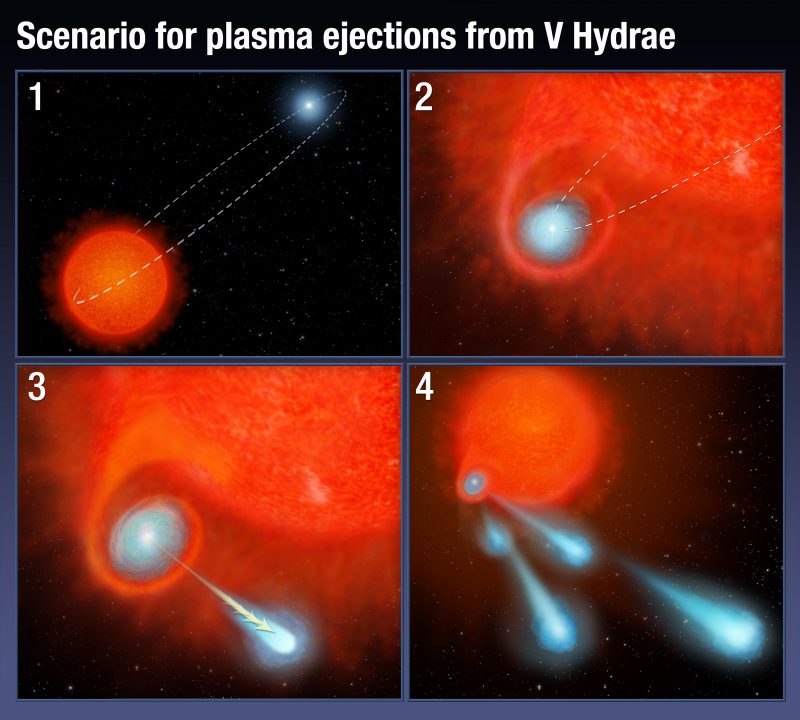 More detail on the artist’s concept of how the binary star system V Hydrae is launching balls of plasma into space. Image via NASA, ESA, and A. Feild (STScI). Read more about this image.

Bottom line: Astronomer Raghvendra Sahai of NASA’s Jet Propulsion Laboratory led a team that used the Hubble Space Telescope to detect superhot blobs of gas, each twice as massive as the planet Mars, being ejected near a dying star. The team is linking this discovery with the diversity of shapes of planetary nebulae, expanding shells of gas seen around aging stars.