Meet J1342+0928, now the most distant quasar yet known, containing the most-distant-yet supermassive black hole. Both exist at a time just 690 million years after the Big Bang. 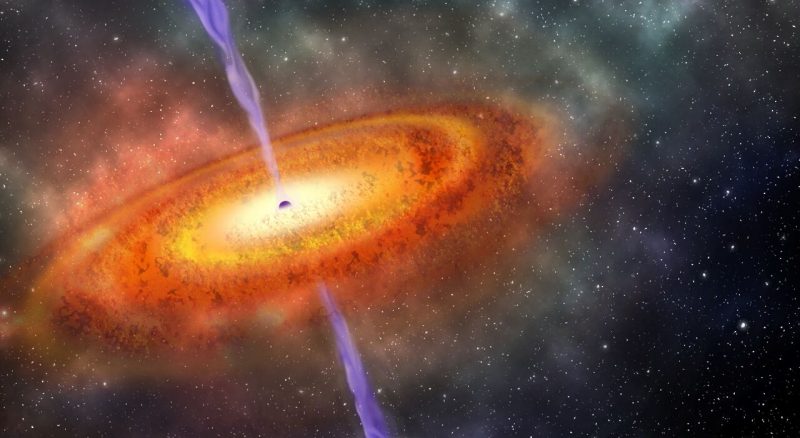 Several astronomical institutions today (December 6, 2017) are announcing the most-distant-yet luminous quasar, containing the most-distant-yet supermassive black hole. The black hole presumably powers the quasar, whose redshift is 7.54, corresponding to a time when the universe was only 5 percent of its current age, just 690 million years after the Big Bang. Eduardo Bañados of the Carnegie Institution for Science in Washington, DC led the team of astronomers that made this discovery, using Carnegie’s Magellan telescopes in Chile.

The mass of this black hole is some 800 million times that of our sun, in contrast to the 4-million-mass black hole thought to lie at the center of our own Milky Way galaxy. These findings are published today in the peer-reviewed journal Nature.

These astronomers said that between 20 and 100 quasars as bright and as distant as the quasar discovered by Bañados and his team are predicted to exist over the whole sky. So this is a major discovery that, they said:

… will provide fundamental information of the young universe, when it was only 5 percent its current age.

As often happens in astronomy, this new discovery has left astronomers perplexed. They are amazed to discover so massive a black hole so early in cosmic history, which challenges our understanding of the early growth of supermassive black holes and their host galaxies. Coauthor Xiaohui Fan of the University of Arizona remarked:

The new quasar is itself one of the first galaxies, and yet it already harbors a behemoth black hole as massive as others in the present-day universe!

Fan speculated that the new quasar is:

…probably just an early bloomer. If it is located in a denser than average part of the universe, it could get an earlier start in life and grow more quickly.

He said he suspects that despite its precocious youth, J1342+0928 eventually settled down to life at a more measured pace, becoming a more typical supermassive black hole at the center of a large elliptical galaxy. 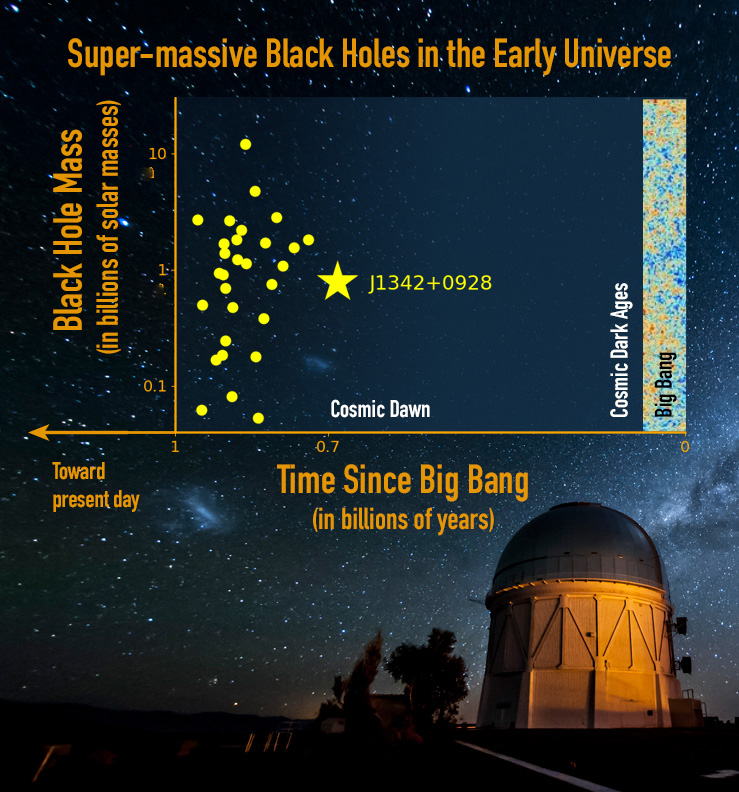 The new supermassive black hole J1342+0928 (yellow star), which resides in a mostly neutral universe at the edge of cosmic dawn, is more distant than any other found to date (yellow dots). Image via Jinyi Yang, University of Arizona; Reidar Hahn, Fermilab; M. Newhouse NOAO/AURA/NSF.

The Bañados quasar is also interesting, because it is from the time known as the epoch of reionization, when the universe emerged from its dark ages. The statement from Carnegie explained:

The Big Bang started the universe as a hot, murky soup of extremely energetic particles that was rapidly expanding. As it expanded, it cooled. About 400,000 years later (very quickly on a cosmic scale), these particles cooled and coalesced into neutral hydrogen gas. The universe stayed dark, without any luminous sources, until gravity condensed matter into the first stars and galaxies. The energy released by these ancient galaxies caused the neutral hydrogen strewn throughout the universe to get excited and ionize, or lose an electron, a state that the gas has remained in since that time. Once the universe became reionized, photons could travel freely throughout space, thus the universe became transparent to light.

Analysis of the newly found quasar shows that a large fraction of the hydrogen in its immediate surroundings is neutral, indicating that the astronomers have identified a source in the epoch of reionization, before enough of the first stars and galaxies have turned on to fully re-ionize the universe.

It was the universe’s last major transition and one of the current frontiers of astrophysics.

This is a very exciting discovery, found by scouring the new generation of wide-area, sensitive surveys astronomers are conducting using NASA’s Wide-field Infrared Survey Explorer in orbit and ground-based telescopes in Chile and Hawaii. With several next-generation, even-more-sensitive facilities currently being built, we can expect many exciting discoveries in the very early universe in the coming years. 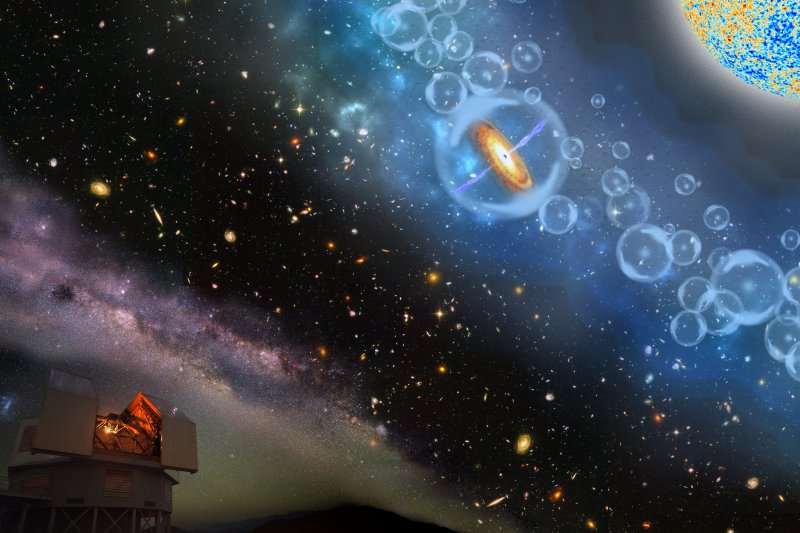 Artist’s concept of the quasar and its black hole in space. Not to scale! The quasar is surrounded by neutral hydrogen, indicating that it is from the period called the epoch of reionization, when the universe’s first light sources turned on. Illustration via Robin Dienel/ Carnegie Institution.

Bottom line: J1342+0928 is now the most distant quasar yet known, and it contains the most-distant-yet supermassive black hole. Both exist at a time just 690 million years after the Big Bang.