For the 1st time, astronomers have detected the faint radio afterglow of a ghost explosion – a kind of cosmic sonic boom – possibly the result of a weird kind of gamma-ray burst. 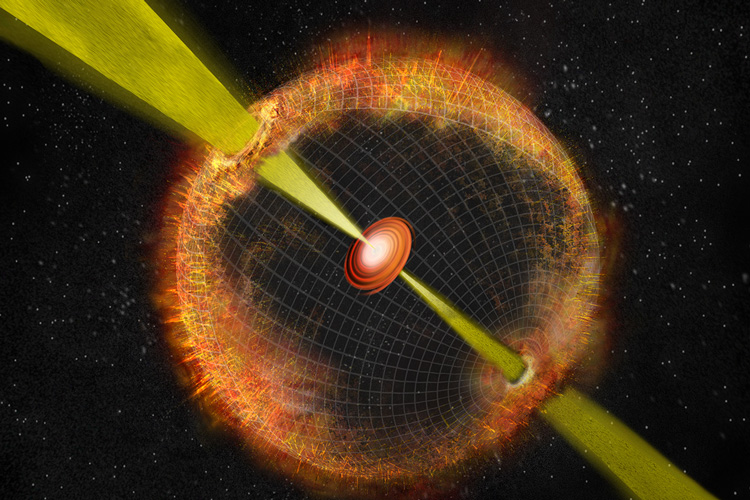 Artist’s concept of a gamma-ray burst after a massive explosion of a star. The two beams of gamma rays are difficult to detect unless one of them is oriented toward Earth. Such a powerful occurrence is thought to be the cause of the “ghost” explosion where a faint “radio glow” can still be detected long after the event itself. Image via NRAO.

The universe is seemingly a very quiet place, where no one can hear you scream. But that doesn’t mean it’s boringly inactive, either. In fact, the universe can be very chaotic – violent even – for example, when stars explode in supernovas. Usually, such occurrences are fairly conspicuous by nature. These explosive eruptions of gas and dust can be seen for many light-years. But now, astronomers have found the first evidence for a somewhat different kind of stellar catastrophe – an unseen “ghost” explosion that occurred back in the 1990s and then faded almost out of existence in the time since then, leaving only a faint ghostly afterglow today.

The new findings were published in a peer-reviewed paper in The Astrophysical Journal Letters on October 4, 2018.

Astronomers made the discovery while searching through data from the first epoch of observing for the VLA Sky Survey in late 2017. The explosion event – known as FIRST J141918.9+394036 – has also been referred to as a kind of cosmic sonic boom, and is thought to have been what is called an orphan afterglow, where a powerful gamma-ray burst (GRB) was generated by the collapse of a massive star in a galaxy nearly 300 million light-years from Earth.

If this happened, in the process the star collapsed into either a dense star called a magnetar, or more likely, a black hole.

It is the radio afterglow of the initial explosion that had been detected, even though it had now almost completely faded. This GRB, however, could not be detected with a gamma-ray telescope, like typical GRBs. As Casey Law, an assistant research astronomer at the University of California, Berkeley explained:

We believe we are the first to find evidence for gamma-ray bursts that could not be detected with a gamma-ray telescope. These are known as ‘orphan’ gamma-ray bursts, and many more such orphan GRBs are expected in new radio surveys that are now underway.

Bryan Gaensler at the University of Toronto, a co-author on the new paper, added:

FIRST J141918.9+394036 is very far away, located in a dwarf galaxy 284 million light-years from Earth, which is probably a good thing. It resides in a region where new stars are still being born, as noted by Law:

This is a small galaxy with active star formation, similar to others in which we have seen the type of GRBs that result when a very massive star explodes.

Usually in a GRB, the source of the gamma rays – a relativistic jet of material emerging from the explosive merger – must be pointing directly at Earth in order to be detected. It is estimated that only about one in every 100 GRBs can be seen from Earth using NASA’s Fermi Gamma-ray Space Telescope. According to Law:

GRBs emit their gamma rays in narrowly focused beams. In this case, we believe the beams were pointed away from Earth, so gamma-ray telescopes did not see this event. What we found is the radio emission from the explosion’s aftermath, acting over time much as we expect for a GRB.

Animation of images from 1993 to 2017 showing the radio emission from the “orphan” gamma ray burst, fading with time.
Image via Law et al./Bill Saxton/NRAO/AUI/NSF.

The new ghost GRB is estimated to have been 50 times brighter back in 1993 than it is today.

So what causes these explosions in the first place? Law thinks that they are preceded by either the merger of two very large stars – neutron stars – or the death of a single, massive star, which produces a rapidly spinning and highly magnetized neutron star known as a magnetar. The explosion emits intense radio waves that then gradually fade away; the magnetar will then spin down and sometimes emit fast radio bursts (FRBs), which are themselves a unique and baffling phenomenon. If it was a single star that exploded, it may have been more than 40 times the mass of our sun.

FIRST J141918.9+394036 was first seen as a bright spot in a radio survey of the sky conducted in the early 1990s by the Karl G. Jansky Very Large Array radio observatory in New Mexico. It is now much fainter and can only be detected by large radio telescopes. As noted by Law:

We thought, ‘that was weird.’ Its peak brightness in the ‘90s was quite high, so it was a big, big change: about a factor of 50 decrease in brightness. We basically went through every radio survey, every radio dataset we could find, every archive in the world to piece together the story of what happened to this thing.

We compared images from old maps of the sky and found one radio source that was no longer visible today in VLASS. Looking at the radio source in other old data shows that it lived in a relatively nearby galaxy, and back in the 1990s, it was as luminous as the biggest explosions known, gamma-ray bursts. 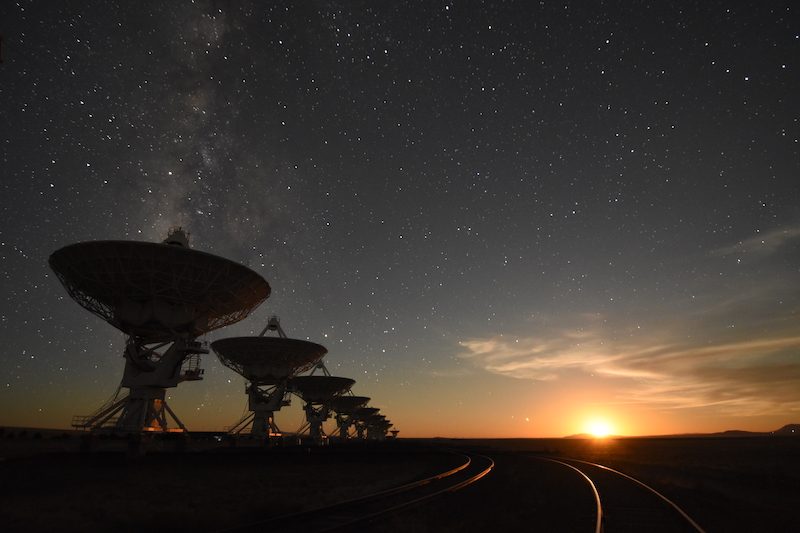 The Karl G. Jansky Very Large Array radio observatory in New Mexico, which was used to discover the “ghost” explosion. Image via NRAO/AUI/NSF.

Law and his colleagues later discovered 10 other sets of radio observations of that same area of the sky, in the constellation Boötes, that allowed them to track the object’s appearance and disappearance. The first radio emissions from the explosion probably reached Earth in 1992 or 1993, although not actually first detected until 1994.

Law is hoping to find many more examples of similar ghost explosions in the years ahead.

Part of the story is about how much of the sky is changing, even on this long time scale, and how hard it is to test that. It is also partly about the value of new data science techniques. Pulling out information from these rich and diverse data sets is helping us do good science.

Bottom line: This “ghost” explosion is the first of its kind to be discovered by astronomers, and will help researchers better understand exotic cosmic phenomena such as GRBs, FRBs and stellar evolution in general.

Via Berkeley News and University of Toronto and NRAO