Geysers on Enceladus: Curtains not jets

Researchers thought Saturn’s moon Enceladus had jet-like geysers. But the jets may be optical illusions, caused by looking through a “fold” in curtain-like geysers. 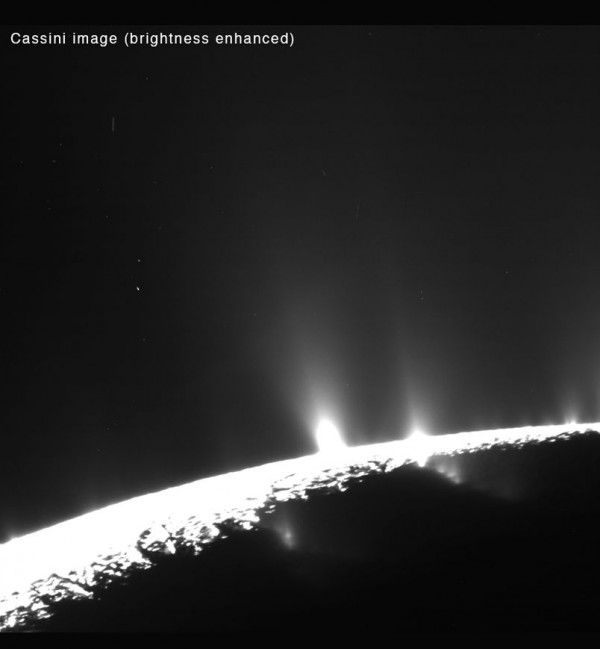 Researchers thought Saturn’s moon Enceladus had jet-like geysers. Now they believe the jets are optical illusions in places where the viewer is looking through a “fold” in curtain-like geysers on Enceladus. Image via NASA/JPL-Caltech/SSI/PSI.

Scientists said a year ago they’d mapped 101 distinct geysers, spewing tiny icy particles and water from the surface of Saturn’s moon Enceladus. The Cassini spacecraft – which has been orbiting Saturn, weaving in and among the moons, since 2004 – made this insight possible. Now, however, researchers are re-thinking the nature of the geysers on this fascinating moon. They now say that most of the eruptions on Enceladus might be diffuse curtains rather than discrete jets. They published this research on May 7, 2015 in the journal Nature.

They had thought the jet-like geysers on Enceladus were erupting along fractures in the moon’s south polar region – the famous “tiger stripe” fractures. In the new study, they’re now speaking of phantom jets created due to an optical illusion. Joseph Spitale, lead author of the study and a participating scientist on the Cassini mission at the Planetary Science Institute in Tucson, said in a statement:

We think most of the observed activity represents curtain eruptions from the ‘tiger stripe’ fractures, rather than intermittent geysers along them. Some prominent jets likely are what they appear to be, but most of the activity seen in the images can be explained without discrete jets.

In analyzing Cassini’s images of the eruptions on Enceladus, Spitale and colleagues took particular note of the faint background glow present in most images. The brightest eruption features, which appear to be discrete jets, look to them to be superimposed intermittently upon this background structure.

The researchers modeled eruptions on Enceladus as uniform curtains along the tiger stripe fractures. They found that phantom brightness enhancements appear in places where the viewer is looking through a “fold” in the curtain. The folds exist because the fractures in Enceladus’ surface are more wavy than perfectly straight. The researchers think this optical illusion is responsible for most, but not all, of what appear to be individual jets. Spitale said:

The viewing direction plays an important role in where the phantom jets appear. If you rotated your perspective around Enceladus’ south pole, such jets would seem to appear and disappear. 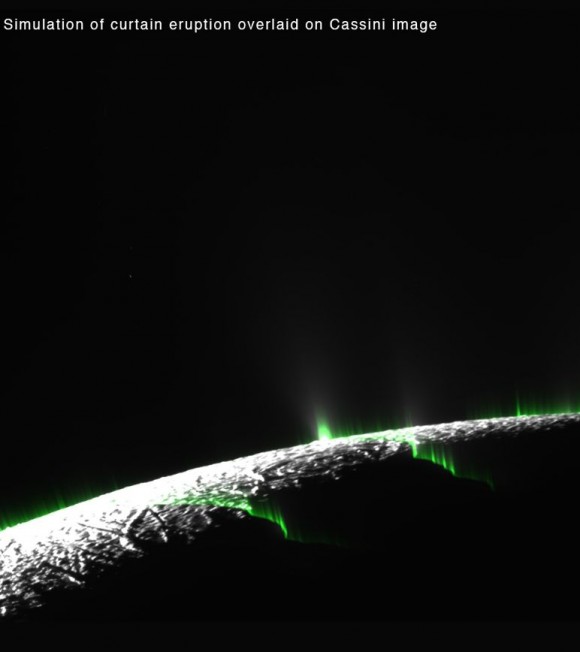 Simulated images of curtain-like geysers on Enceladus. The simulated images produced by the scientists line up nicely with some of the features in real Cassini images that appear to be discrete columns of spray. Image via NASA/JPL-Caltech/SSI/PSI.

The correspondence between simulation and spacecraft data suggests that much of the discrete-jet structure is an illusion, according to the researchers.

Curtain eruptions occur on Earth where molten rock, or magma, gushes out of a deep fracture. These eruptions, which often create spectacular curtains of fire, are seen in places such as Hawaii, Iceland and the Galapagos Islands.

Linda Spilker, Cassini project scientist at NASA’s Jet Propulsion Laboratory, Pasadena, California, who was not involved in the study, said:

Our understanding of Enceladus continues to evolve, and we’ve come to expect surprises along the way.

This little ice world is becoming more exciting, not less, as we tease out new details about its subsurface ocean and astonishing geophysical activity. 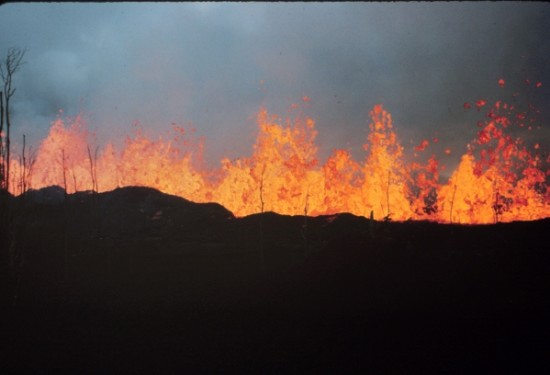 The same processes that create curtain-like geysers on Enceladus operate on Earth as well. But, here, curtain eruptions happen with molten rock. Image via hilo.hawaii.edu.

Bottom line: Researchers thought Saturn’s moon Enceladus had jet-like geysers. But the jets may be optical illusions, caused by looking through a “fold” in curtain-like geysers.