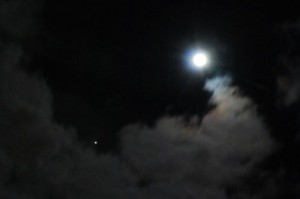 But the moon and Jupiter are also beautiful to behold with the eye alone. Here’s a shot from October 31, 2012 from EarthSky Facebook friend Annie Lewis in Madrid, Spain.

Thank you! Your submission has been received!
Oops! Something went wrong while submitting the form.
END_OF_DOCUMENT_TOKEN_TO_BE_REPLACED