USGS released this cool geologic map of Mars this week, which was prepared for NASA. What to see first? Notice impact craters, in yellow. 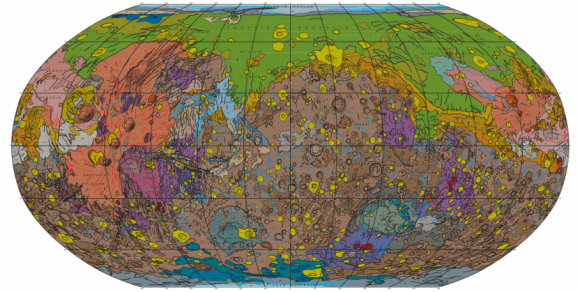 USGS released this geologic map of Mars yesterday (July 14, 2015), which was prepared for NASA. If you click to the map at USGS’ site, and use the tools at the lower right, you can explore Mars. Popular Science has a good explanation of what you’ll be seeing:

All the different colored parts represent areas of crust that were formed at different times and from different processes. For example, the extensive green area near the north pole represents lowland plains formed during the Red Planet’s Hesperian Epoch, about 3.7 billion to 3 billion years ago. Scientists think those northern plains are covered in sediment from what were once Martian rivers and lakes. You can learn more about the green area, or any other colored area, in the extensive key on the right side of the map sheet.

One easy thing to spot are impact craters, which are roundish and marked on the map in bright yellow. Can you find Gale Crater, the site where NASA’s Curiosity rover landed? Gale Crater is just southwest of Elysium Planitia, which is the mostly pink area on the right side of the map.