Stellar mergers that cause gamma ray bursts might make pencil-thin jets. If true, since most jets won’t be pointed our way, we’ll see no sign of most mergers. 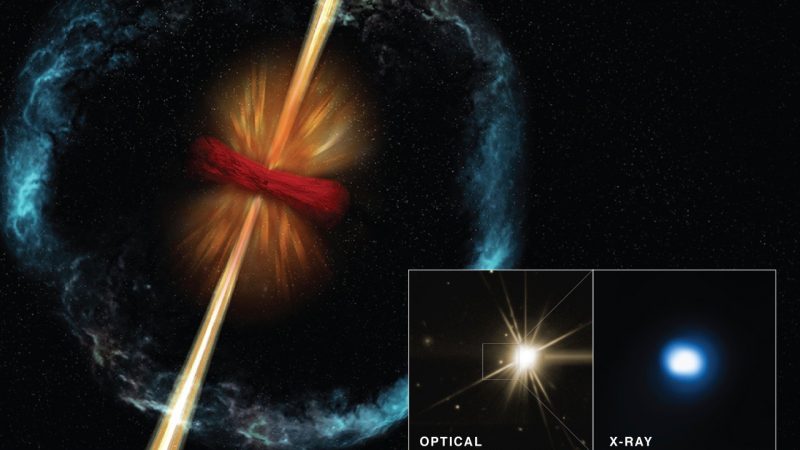 Artist’s concept of a narrow jet from the merger of two neutron stars, and a resulting gamma-ray burst (GRB). Insets show a real-life optical view (l) and X-ray view (r) of GRB 140903A. Read full description below. Image via Chandra X-Ray Observatory.

The Chandra X-ray Observatory said on July 14, 2016 that astronomers have acquired the strongest evidence so far – from an object called GRB 140903A – that violent stellar mergers produce pencil-thin jets of gamma rays. Such thin jets might mark the mergers of two neutron stars or a neutron star and a black hole. In recent decades, astronomers believe they’ve been observing these events via short gamma-ray bursts, or GRBs (here, “short” means the burst lasts two seconds or less). Now, Chandra said, it’s possible that we won’t see most of the mergers taking place, because the very narrow jets they produce – the jets that produce the gamma rays – won’t be pointed where our telescopes can detect them.

The strongest evidence to date for this possibility comes from an object called GRB 140903A, located in the direction to the C-shaped constellation Corona Borealis. NASA’s Swift observatory detected it on September 3, 2014. Astronomers said in a statement from Chandra X-Ray Observatory:

Scientists used optical observations with the Gemini Observatory telescope in Hawaii to determine that GRB 140903A was located in a galaxy about 3.9 billion light years away, relatively nearby for a GRB …

About three weeks after the Swift discovery of GRB 140903A, a team of researchers led by Eleonora Troja of the University of Maryland, College Park (UMD), observed the aftermath of the GRB in X-rays with Chandra. Chandra observations of how the X-ray emission from this GRB decreases over time provide important information about the properties of the jet.

Specifically, the researchers found that the jet is beamed into an angle of only about five degrees based on the X-ray observations, plus optical observations with the Gemini Observatory and the DCT and radio observations with the National Science Foundation’s Karl G. Jansky Very Large Array. This is roughly equivalent to a circle with the diameter of your three middle fingers held at arms length.

This means that astronomers are detecting only about 0.4% of this type of GRB when it goes off, since in most cases the jet will not be pointed directly at us.

Full description of illustration at the top of this page: The large panel in the graphic is an illustration showing the aftermath of a neutron star merger, including the generation of a GRB. In the center is a compact object – either a black hole or a massive neutron star – and in red is a disk of material left over from the merger, containing material falling towards the compact object. Energy from this infalling material drives the GRB jet shown in yellow. In orange is a wind of particles blowing away from the disk and in blue is material ejected from the compact object and expanding at very high speeds of about one tenth the speed of light.

Bottom line: Analysis of a short gamma ray burst from an object called GRB 140903A suggests that the events that cause the bursts – possibly mergers of two neutron stars, or a neutron star and a black hole – result in pencil-thin, gamma-ray-producing jets. If so, astronomers may be detecting only a very small percentage (“about 0.4%”) of this type of GRB, since most jets won’t be pointed our way.