Supermassive black hole and host galaxy not evolving together?

Astronomers assumed supermassive black holes and their host galaxies evolve together and affect each other. They call it “co-evolution.” But it’s not happening in the distant galaxy WISE1029. 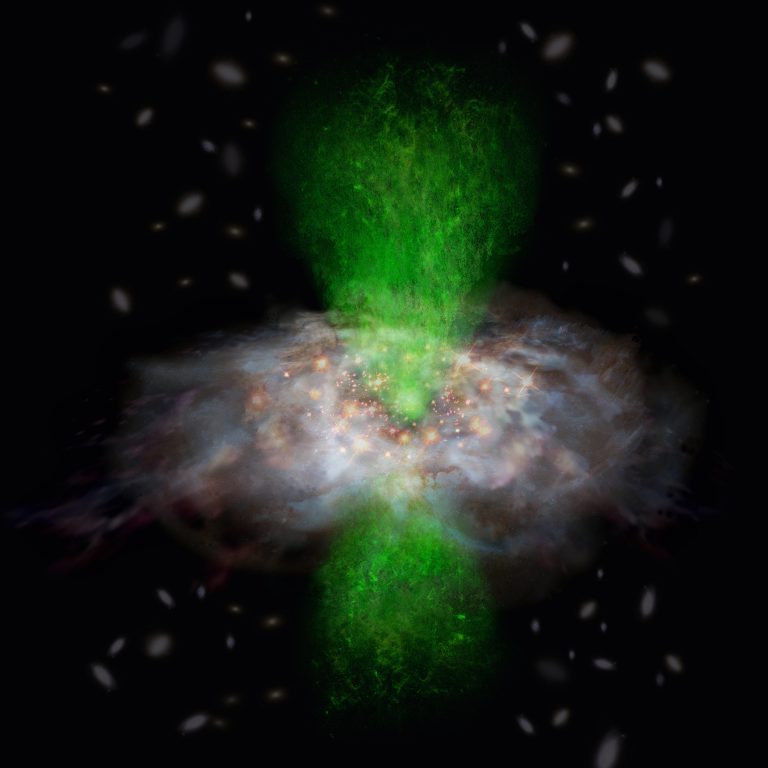 Artist’s concept of gas outflow (in green) driven by a central supermassive black hole not affecting the star formation of its host galaxy. Maybe it happens when the gas is flowing especially perpendicularly to the galaxy’s flat disk. Image via ALMA (ESO/NAOJ/NRAO). Look below for real images of the galaxy in this study.

Yoshiki Toba of the Academia Sinica Institute of Astronomy and Astrophysics in Taiwan led this new research. The team used the ALMA radio telescope, because it’s sensitive to millimeter and submillimeter wavelengths and thus good at studying distant gas clouds – for example, those that form stars and possibly planets within our own local Milky Way galaxy. Galaxies evolve in large part by forming stars, and ALMA can also be aimed toward distant galaxies, to study star-forming gas in their disks. Plus, it can peer at the gas flowing outward from the vicinity of a distant galaxy’s central supermassive black hole.

Toba and his colleagues aimed the telescope toward an active galaxy known as WISE1029+0501. This galaxy is known to have a strong ionized gas outflow, presumably from the supermassive black hole at its center. The team also clearly detected carbon monoxide (CO) gas associated with that distant galaxy’s flat disk. Such gas is known to be related to star formation. Yet, these astronomers found, the CO gas in the flat part of the galaxy is not affected by the strong ionized gas outflow launched by the supermassive black hole from the galaxy’s center. Yoshiki commented in a February 20, 2018, statement from ALMA:

… it has made the co-evolution of galaxies and supermassive black holes more puzzling.

… understanding such co-evolution is crucial for astronomy. By collecting statistical data of this kind of galaxies and continuing in more follow-up observations using ALMA, we hope to reveal the truth.

Yoshiki’s research was published in late 2017 in the peer-reviewed Astrophysical Journal.

The team has focused on a particular type of objects called Dust-Obscured Galaxy (DOG) that has a prominent feature: despite being very faint in visible light, it is very bright in the infrared. This image shows the DOG that the team studied, WISE1029. The left and right panels show an optical image from the Sloan Digital Sky Survey (SDSS), and a mid-infrared image from WISE, respectively. Image via Sloan Digital Sky Survey/ NASA JPL-Caltech/ ALMA.

Bottom line: Astronomers thought that supermassive black holes and their host galaxies evolved together, but maybe – in at least some cases – they don’t.