Galaxy quakes in our Milky Way

Astronomers say they can use “galactoseismology” – the study of ripples in a galaxy’s disk – to map the interior structure of galaxies and learn about dark matter.

Forget for a moment about big earthquakes on Earth. Astronomers say our entire Milky Way galaxy has undergone quakes, and that a trio of brightly pulsating stars at the outskirts of the galaxy – now seen racing outward from the galaxy – are a sign of a relatively recent one. The observation explains ripples observed over the past decade in the outer disk of our galaxy. It may also confirm a method for detecting dwarf galaxies dominated by dark matter.

Sukanya Chakrabarti of Rochester Institute of Technology (RIT) – who previously developed a way to discover and map the dark matter halos of distant galaxies, using gravitational ripples caused by the passing of their dim satellite galaxies – was lead author on the research, presented last week (January 7, 2016) at the American Astronomical Society meeting in Kissimmee, Florida.

The work suggests that a dwarf galaxy packed with dark matter skimmed our own as recently as a few hundred million years, causing seismic waves on a galactic scale in the gas in our galaxy’s outer disk. Charrabarti has submitted this finding to Astrophysical Journal Letters. Her statement from RIT said:

This new method to characterize dark matter marks the first real application of the field of galactoseismology.

Just as seismologists analyze waves to infer properties about the Earth’s interior, [so astronomers can use] waves in the galactic disk to map the interior structure and mass of galaxies.

Finding a galaxy’s mass is a first step to probing for hidden dark matter. 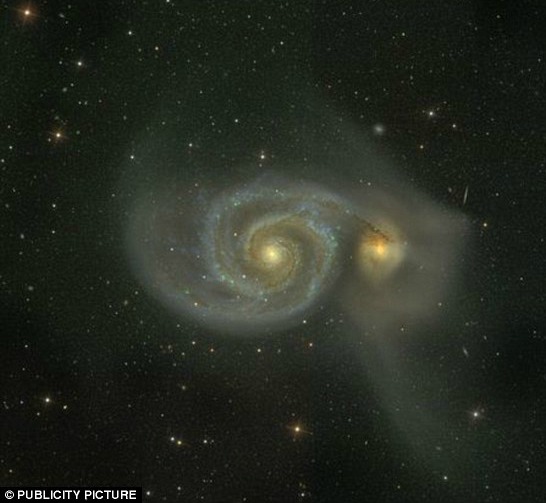 M51, the famous Whirlpool galaxy, is thought to be similar to our Milky Way and may also undergo galaxy-wide quakes. As we look toward this galaxy in space – 26 million light-years away – we see it in the midst having a close encounter with its dwarf galaxy neighbor (r), called NGC 5195. Image via The Daily Mail

Chakrabarti’s team used spectroscopy – where starlit is split into a rainbow array of colors – to calculate the speed of the three Cepheid variable stars. These stars’ pulsations are linked to their intrinsic brightnesses, and thus they are classically used as yardsticks to measure the distances to galaxies. The particular three Cepheids used in Chakrabarti’s new study are located in the direction to the constellation Norma, visible from Earth’s Southern Hemisphere.

The team found that the three Cepheids are racing away from our galaxy at an average speed of 450,000 miles per hour (700,000 kph). Astronomers call the component of a star’s motion toward or away from us its radial velocity. Chakrabarti explained:

The radial velocity of the Cepheid variables is the last piece of evidence that we’ve been looking for. You can immediately conclude that they are not part of our galaxy.

The video above shows a computer simulation of gas distribution (l) and stars (r) in the Milky Way and shows how a dwarf galaxy might have affected our galaxy as it brushed past.

She told the Daily Mail:

This really implicates these stars as being part of an organized, fast-moving system, which we believe is a dwarf galaxy.

It’s also very likely this dwarf satellite brushed our galaxy millions of years ago and left ripples in its wake.

Her statement explained the connection to dark matter:

Invisible particles known as dark matter make up 85 percent of the mass of the universe. The mysterious matter represents a fundamental problem in astronomy because it is not understood…

We have made significant progress into this new field of galactoseismology whereby you can infer the dark matter content of dwarf galaxies, where they are, as well as properties of the interior of galaxies by looking at observable disturbances in the gas disk …

It’s very similar to seismology in a sense because we’re trying to infer things about the interior of galaxies and how much dark matter there is and how much there has to be to produce these disturbances.

Bottom line: Sukanya Chakrabarti of Rochester Institute of Technology is a dark matter hunter. She previously developed a way to discover and map the dark matter halos of distant galaxies, using gravitational ripples caused by the passing of their dim satellite galaxies. Her recent work, described here, tracked the motion of three Cepheid variable stars racing away from our galaxy. Her team now believes these stars are part of an unseen dwarf galaxy that brushed our galaxy millions of years ago, leaving seismic ripples in its wake.