A cosmic collision in action. Read more about what happens when 2 galaxies sideswipe each other. 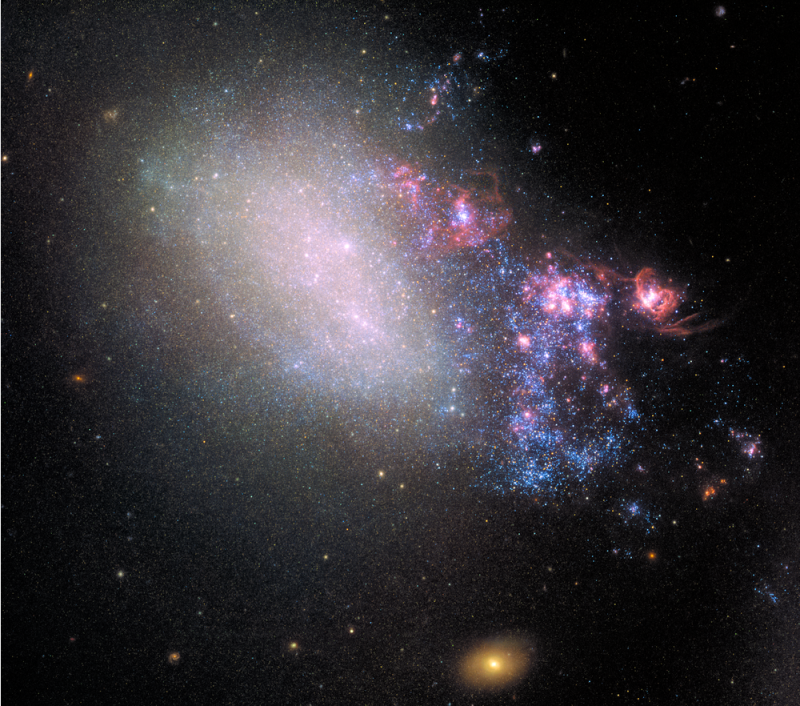 The Hubble Space Telescope’s Wide Field Camera 3 (WFC3) and Advanced Camera for Surveys (ACS) captured this image of irregular galaxy NGC 4485. The young blue stars and star-incubating pinkish nebulas on its right side indicate active star formation, caused by a close encounter with another galaxy. Meanwhile, on its left side, you can see hints of the galaxy’s earlier spiral structure. Image via NASA/ESA/HubbleSite.

Isn’t this a beautiful and dynamic image? NASA and ESA released it on May 16, 2019. It’s an irregular galaxy called NGC 4485, seen by the Hubble Space Telescope. This galaxy, HubbleSite said:

… shows all the signs of having been involved in a hit-and-run accident with a bypassing galaxy. Rather than destroying the galaxy, the chance encounter is spawning a new generation of stars, and presumably planets.

The right side of the galaxy is ablaze with star formation, shown in the plethora of young blue stars and star-incubating pinkish nebulas. The left side, however, looks intact. It contains hints of the galaxy’s previous spiral structure, which, at one time, was undergoing normal galactic evolution.

The larger culprit galaxy, NGC 4490, is off the bottom of the frame. The two galaxies sideswiped each other millions of years ago and are now 24,000 light-years apart. The gravitational tug-of-war between them created rippling patches of higher-density gas and dust within both galaxies. This activity triggered a flurry of star formation.

This galaxy is a nearby example of the kind of cosmic bumper-car activity that was more common billions of years ago when the universe was smaller and galaxies were closer together. 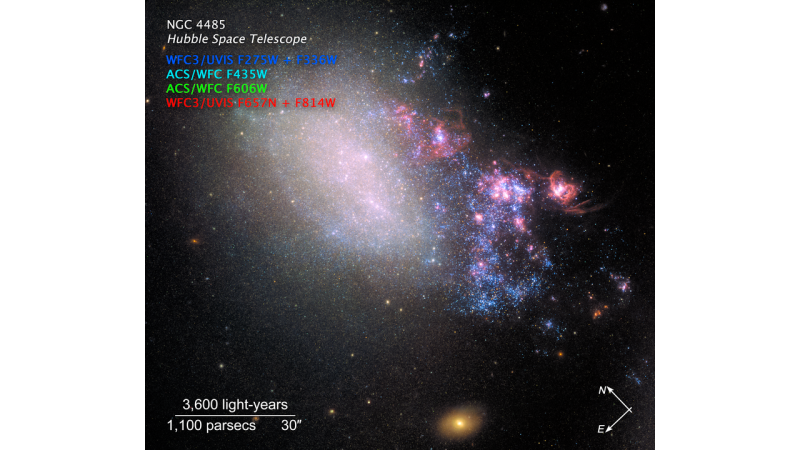 Annotated version of the image above via NASA/ESA/HubbleSite.

Bottom line: Hubble Space Telescope image of galaxy NGC 4490, which was sideswiped by another galaxy and is undergoing rampant star formation … but only on one side.