For the first time, astronomers peered through stars and dust in the Milky Way galaxy to find … more galaxies. The work helps explain a mystery Great Attractor. 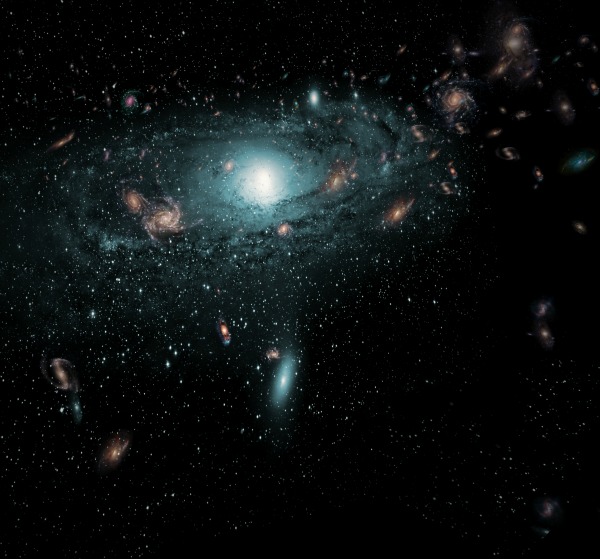 Artist’s impression of galaxies found in the ‘Zone of Avoidance’ behind our Milky Way galaxy. The artist created this scene using the actual positional data of newly studied hidden galaxies and randomly populating the region with galaxies of different sizes, types and colours. Image via the International Centre for Radio Astronomy Research (ICRAR), in Australia.

You know how, on a dark night, you can sometimes see the edgewise view of our own Milky Way galaxy? This lovely starlit trail is wonderful to see, and astronomers love to study what’s inside it, but our galaxy is so crowded with stars and dust that they can’t see through it at optical wavelengths. And thus, since the 1800s, astronomers have spoken of some 20% of the sky as a Zone of Avoidance. It’s the region of sky located in the direction of our galaxy’s flat plane. This week, astronomers said, for the first time they’ve been able to use a radio telescope peer through the galactic plane and view hundreds of formerly hidden galaxies. Thus they’ve shed light on a mysterious gravitational tugging from what they had dubbed simply the Great Attractor. These researchers published their work in the Astronomical Journal on February 9, 2016.

In other words, since the 1970s and 1980s, we’ve known there was some Great Attractor in this region – some diffuse, hidden concentration of mass 250 million light-years away – pulling our Milky Way galaxy and hundreds of thousands of other galaxies towards it. We knew the Great Attractor has a gravitational force equivalent to some million billion suns.

Now we now there are some 883 galaxies, at least, in this region of space. A third of these galaxies had never been seen prior to this study.

Using the Parkes radio telescope of the Commonwealth Scientific and Industrial Research Organisation (CSIRO) – the federal government agency for scientific research in Australia – equipped with an innovative receiver, an international team of scientists peered through the stars and dust of the Milky Way, into this previously unexplored region of space.

The new study takes another step toward explaining the Great Attractor region.

Annotated animation showing hidden galaxies discovered in the 'Zone of Avoidance' from ICRAR on Vimeo.

Lead author Professor Lister Staveley-Smith, from The University of Western Australia node of the International Centre for Radio Astronomy Research (ICRAR), said in a statement:

The Milky Way is very beautiful, of course, and it’s very interesting to study our own galaxy, but it completely blocks out the view of the more distant galaxies behind it.

We don’t actually understand what’s causing this gravitational acceleration on the Milky Way [by the Great Attractor] or where it’s coming from.

We know that in this region there are a few very large collections of galaxies we call clusters or superclusters, and our whole Milky Way is moving towards them at more than two million kilometres per hour.

The research identified several new structures that could help to explain the movement of the Milky Way, including three galaxy concentrations (named NW1, NW2 and NW3) and two new clusters (named CW1 and CW2).

University of Cape Town astronomer Professor Renée Kraan-Korteweg commented that astronomers have been trying to map the galaxy distribution hidden behind the Milky Way for decades:

We’ve used a range of techniques but only radio observations have really succeeded in allowing us to see through the thickest foreground layer of dust and stars.

An average galaxy contains 100 billion stars, so finding hundreds of new galaxies hidden behind the Milky Way points to a lot of mass we didn’t know about until now.

Read more from the International Centre for Radio Astronomy Research. 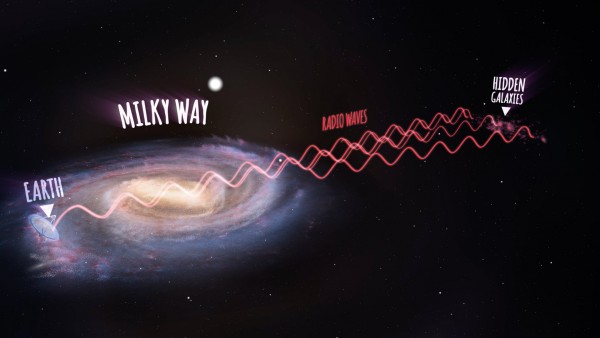 An annotated artist’s impression showing radio waves travelling from the new galaxies, then passing through the Milky Way and arriving at the Parkes radio telescope on Earth (not to scale). Image via ICRAR.

Bottom line: An international team of astronomers used a radio telescope in Australia – equipped with an innovative receiver – to peer through the stars and dust of our Milky Way galaxy. And what did they find? More galaxies. In this way, they’ve taken steps forward in explaining the Great Attractor – a giant concentration of mass that’s pulling our Milky Way and hundreds of thousands of other galaxies toward it.