More examples of pareidolia, seeing familiar objects in unrelated patterns. These 2 nebulae will be close to the hearts of Star Trek fans. 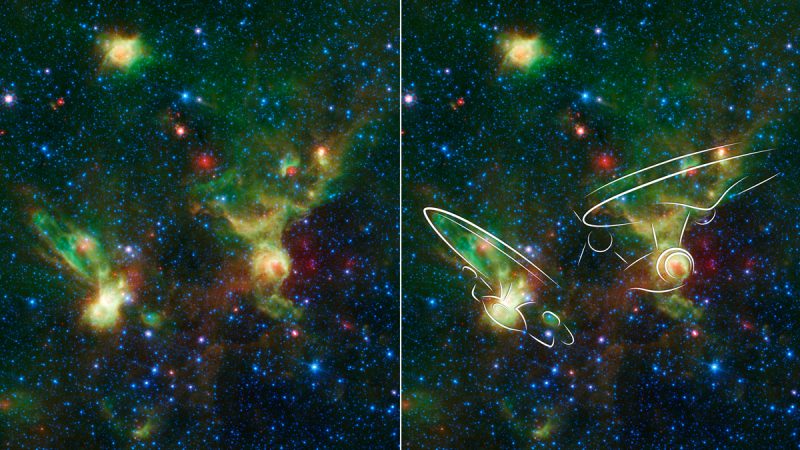 Do you see the starship Enterprise – from the famed Star Trek franchise – in these 2 nebulae? Image via NASA/JPL-Caltech.

Just in time for the 50th anniversary of the TV series Star Trek – created by writer and producer Gene Roddenberry – the Spitzer Space Telescope gives us this image of two nebulae that resemble the legendary starship Enterprise.

On the right of the image, with a little scrutiny, you may see hints of the saucer and hull of the original USS Enterprise, captained by James T. Kirk, as if it were emerging from a dark nebula. To the left, its Next Generation successor, Jean-Luc Picard’s Enterprise-D, flies off in the opposite direction …

Astronomically speaking, the region pictured in the image falls within the disk of our Milky Way galaxy and displays two regions of star formation hidden behind a haze of dust when viewed in visible light. Spitzer’s ability to peer deeper into dust clouds has revealed a myriad of stellar birthplaces like these, which are officially known only by their catalog numbers, IRAS 19340+2016 and IRAS19343+2026.

Trekkies, however, may prefer using the more familiar designations NCC-1701 and NCC-1701-D.

Imaging familiar objects while gazing at unrelated objects is called pareidolia. The constellations themselves are examples of it, as are many other well-known star clusters nebulae including the Beehive and the Lagoon.