“This is the big breakthrough that the field has been waiting for since astronomers discovered fast radio bursts in 2007,” one team member said. 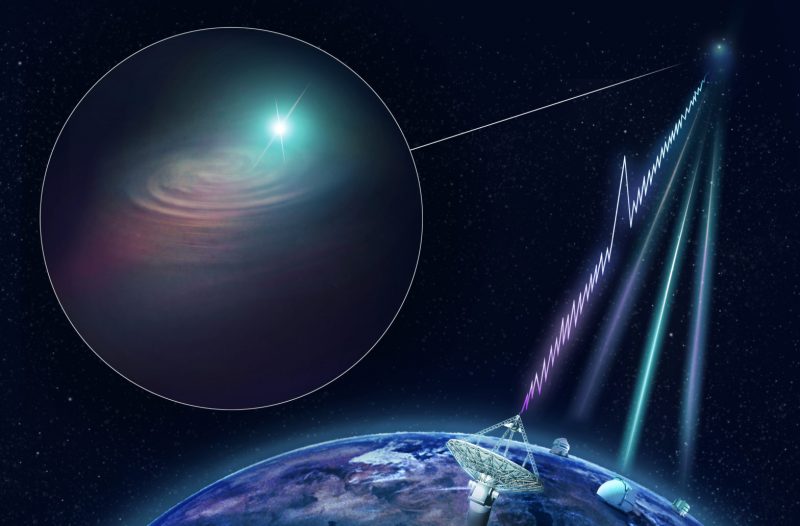 An Australian-led international team of astronomers said on June 27, 2019, that it has now determined the precise location of a powerful but brief burst of cosmic radio waves, known as a fast radio burst. That’s exciting because – although astronomers have observed several dozen of these bursts since they spotted the first one in 2007 – the bursts, which last less than a millisecond, have been challenging to pinpoint in space. These astronomers were able to determine the exact location of a burst labeled FRB 180924. They linked it to a distant galaxy known only as DES J214425.25-405400.81. The team said the burst originated in the outskirts of this galaxy, which is about the size of our Milky Way, located about 4 billion light-years away. Lead author Keith Bannister said:

This is the big breakthrough that the field has been waiting for since astronomers discovered fast radio bursts in 2007.

Bannister’s team used the new Australian Square Kilometer Array Pathfinder (ASKAP) radio telescope in Western Australia to pinpoint the burst. The team accomplished it by developing new technology to freeze and save ASKAP data less than a second after a burst arrived at the telescope. Bannister commented:

If we were to stand on the moon and look down at the Earth with this precision, we would be able to tell not only which city the burst came from, but which postcode – and even which city block.

After pinpointing the burst’s home galaxy, other astronomers around the world were alerted, and the galaxy was then imaged by three of the world’s largest optical telescopes – Keck, Gemini South and ESO’s Very Large Telescope.

A representative of the team – Wael Farah of Swinburne University, Melbourne, Australia – made the announcement of the fast radio burst’s location at the annual meeting of the European Astronomical Society (EWASS 2019), held June 24-28, 2019 in Lyon, France. The result is also published in the peer-reviewed journal Science.

In the 12 years since [the first fast radio burst was seen], a global hunt has netted 85 of these bursts. Most have been ‘one-offs’ but a small fraction are ‘repeaters’ that recur in the same location. In 2017 astronomers found a repeater’s home galaxy but localizing a one-off burst has been much more challenging.

The newly pinpointed burst is a one-off, and thus this is the first time a one-off fast radio burst has been pinpointed. 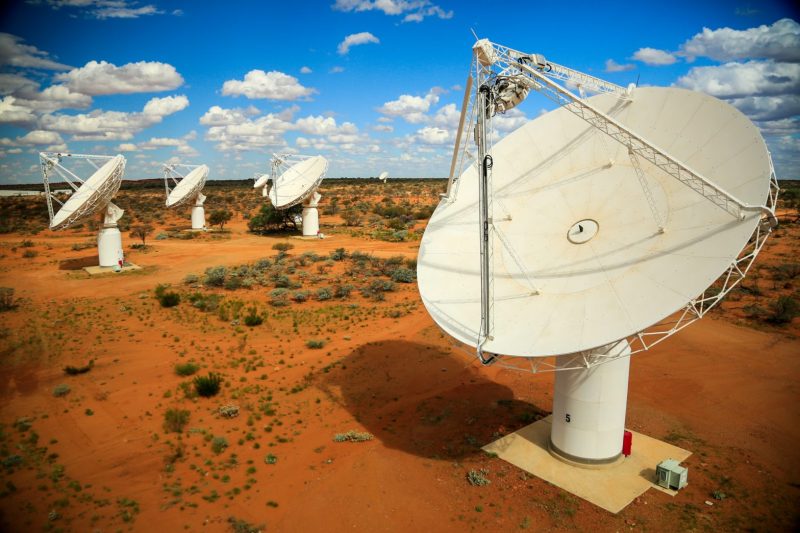 ASKAP is an array of multiple dish antennas and the burst had to travel a different distance to each dish, reaching them all at a slightly different time. Team member Adam Deller of Swinburne University of Technology explained:

From these tiny time differences – just a fraction of a billionth of a second – we identified the burst’s home galaxy and even its exact starting point, 13,000 light-years out from the galaxy’s center in the galactic suburbs.

He added that the only previously localized burst, the “repeater,” is coming from a very tiny galaxy that is forming lots of stars, explaining:

The burst we localized and its host galaxy look nothing like the ‘repeater’ and its host. It comes from a massive galaxy that is forming relatively few stars. This suggests that fast radio bursts can be produced in a variety of environments, or that the seemingly one-off bursts detected so far by ASKAP are generated by a different mechanism to the repeater.

The cause of fast radio bursts remains unknown but the ability to determine their exact location is a big leap towards solving this mystery, these astronomers said.

Read more about this study via EWASS

Bottom line: For the first time, astronomers determined the exact location of a one-off fast radio burst labeled FRB 180924. They linked it to a distant and little-known galaxy labeled DES J214425.25-405400.81. The team said the burst originated in the outskirts of this galaxy, which is about the size of our Milky Way, located about 4 billion light-years away.