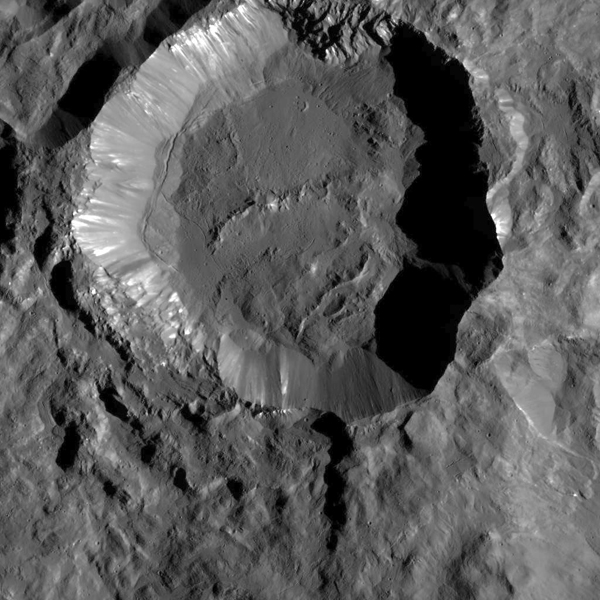 View larger. | Kupalo Crater, caught from Dawn’s LAMO orbit only 240 miles (385 km) above dwarf planet Ceres. Resolution for all the images on this page is 120 feet (35 meters) per pixel. Image via NASA/JPL-Caltech/UCLA/MPS/DLR/IDA.

The image above is of Kupalo Crater, one of the youngest known craters on Ceres. The Dawn spacecraft acquired the image on December 21, 2015, from its low-altitude mapping orbit (LAMO). NASA says:

The crater has bright material exposed on its rim and walls, which could be salts. Its flat floor likely formed from impact melt and debris. This crater measures 16 miles (26 km) across and is located at southern mid-latitudes on Ceres. It’s named for a Slavic god of vegetation and harvest.

Ceres itself is less than 600 miles (945 km) across. It’s the largest object in the asteroid belt between the orbits of Mars and Jupiter, and the largest minor planet within the orbit of Neptune.

Ceres’ designation has been changed several times since Giuseppe Piazzi at Palermo first spotted it on January 1, 1801. It was the first object to be discovered in an orbit between Mars and Jupiter, so of course there was great excitement surrounding Ceres’ discovery. At that time, people considered it to be a new planet, because – given the orbital spacing of other known planets in our solar system – Ceres was orbiting where a missing planet was thought to be.

However, Ceres was reclassified as an asteroid in the 1850s when astronomers began finding many other objects orbiting between Mars and Jupiter.

The Dawn spacecraft – launched by NASA in 2007 – is the first spacecraft ever to orbit two different worlds in our solar system, both in the asteroid belt, Vesta and Ceres. Dawn arrived at Ceres in March, 2015, and has surveyed the dwarf planet from four separate orbits, moving continually closer to it. It is now in its fourth and final – and lowest – orbit.

By the way, in case you missed it, the riddle of the famous bright spots on Ceres has (likely) been solved: Ceres’ bright spots are now thought to be salt deposits. 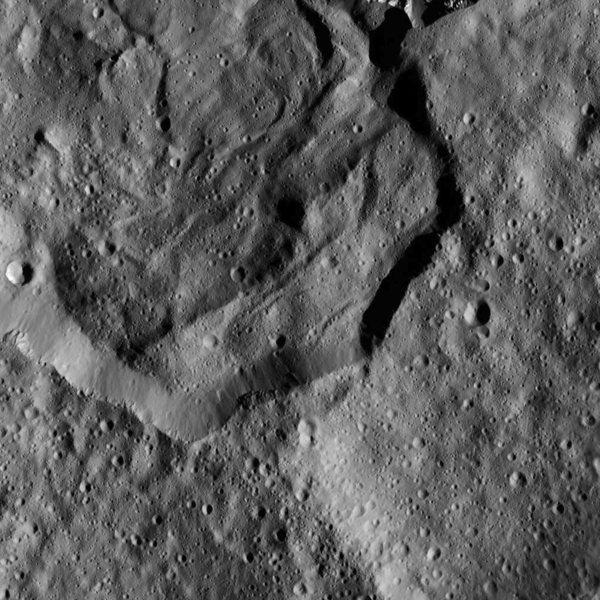 The scene shows an older crater in which a large lobe-shaped flow partly covers the northern (top) part of the crater floor.

The flow is a mass of material ejected when a younger crater formed just north of the rim. 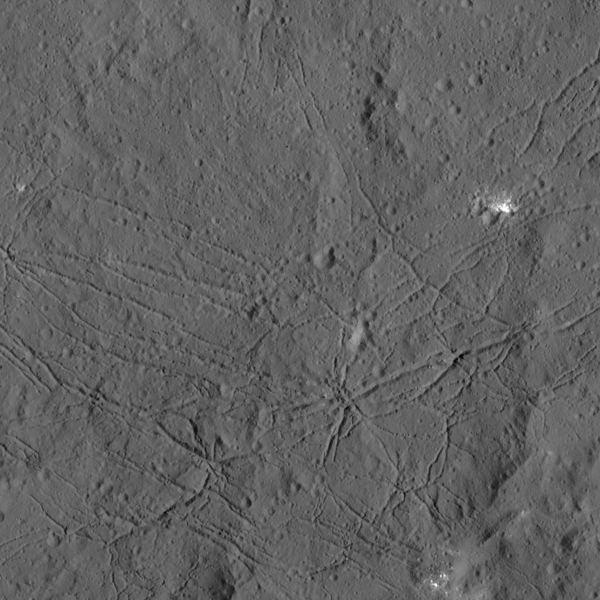 View larger. | The fractured floor of Dantu Crater, from 240 miles (385 km) above Ceres. Image via NASA/JPL-Caltech/UCLA/MPS/DLR/IDA.

The image above shows the fractured floor of Dante Crater on Ceres, imaged by Dawn on December 21. NASA says:

Similar fractures are seen in Tycho, one of the youngest large craters on Earth’s moon.

This cracking may have resulted from the cooling of impact melt, or when the crater floor was uplifted after the crater formed.

Dawn also caught in its higher Survey orbit (see PIA19609). And it caught it from its high-altitude mapping orbit, or HAMO (see PIA19993). 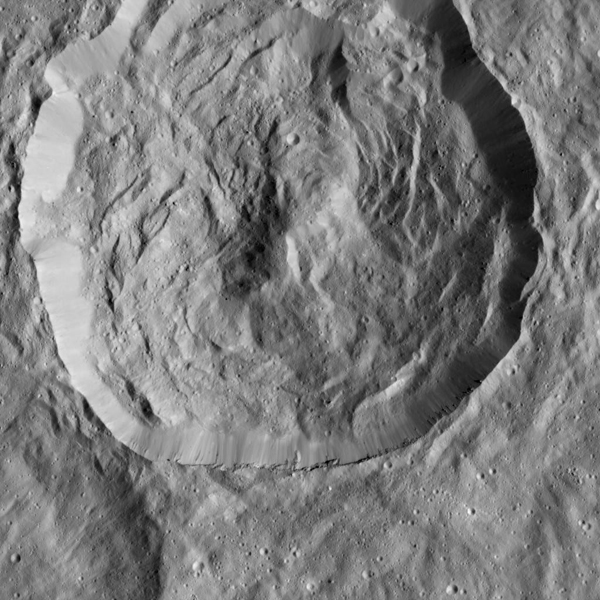 View larger. | An unnamed crater on Ceres, from only 240 miles (385 km) above the dwarf planet. Image via NASA/JPL-Caltech/UCLA/MPS/DLR/IDA.

Check out the unnamed crater on Ceres above, which is covered in ridges and steep slopes, called scarps. Dawn caught this image on December 23, 2015. NASA says:

These features likely resulted when the crater partly collapsed during its formation. The curvilinear nature of the scarps resembles those on the floor of Rheasilvia, the giant impact crater on Vesta, which Dawn orbited from 2011 to 2012.

The 20-mile-wide (32-km-wide) crater is located just west of the larger, named crater Dantu (see PIA20193), at northern mid-latitudes on Ceres. Both of these impact features were captured during Dawn’s Survey orbit (see PIA19609). 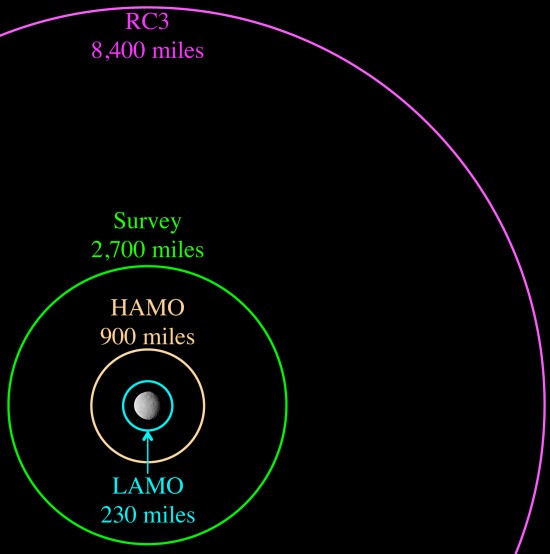 Bottom line: Four close-ups of the dwarf planet Ceres – the largest body in the asteroid belt between Mars and Jupiter – acquired by NASA’s Dawn spacecraft in late December, 2015, from its low-altitude mapping orbit (LAMO).