Earlier today (November 16, 2011), Buzz Aldrin, Neil Armstrong, Michael Collins, and John Glenn became the first astronauts in history to win Congressional Gold Medals. Three of these astronauts were aboard the Apollo 11 mission, which achieved the goal of landing the first human beings on the moon. All four astronauts are already recipients of the Presidential Medal of Freedom, securing them the two highest honors a U.S. civilian can achieve.

The bill authorizing the awards recognizes Neil Armstrong for being the first person to step on the moon, “conquering the moon at great personal risk to safety,” and advancing “America scientifically and technologically, paving the way for future missions to other regions in space”

Buzz Aldrin is recognized for helping to pilot the first craft to land on the moon and for being the second person to step on the moon’s surface.

Michael Collins wins for piloting the Apollo 11 lunar command module and for helping “his fellow Apollo 11 astronauts complete their mission to the moon.” 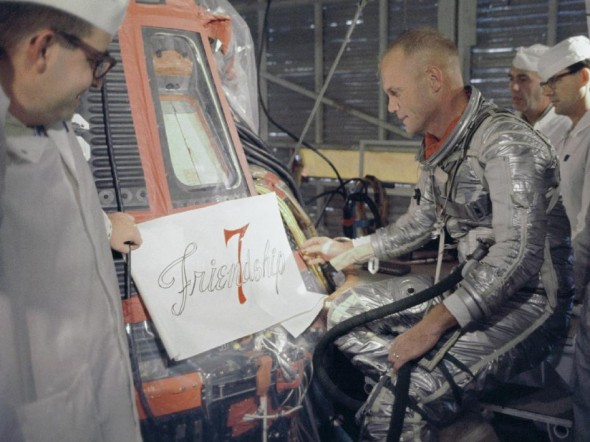 John Glenn examines a drawing for the spacecraft, Friendship 7, in which he will orbit Earth in 1962. Credit: NASA

John Glenn, of course, is recognized for being the first American to orbit the Earth, “pav[ing] the way for the first lunar landing.” The bill continues:

John Glenn’s actions, like Armstrong’s, Aldrin’s and Collins’s [sic], continue to greatly inspire the people of the United States.

The awards come 50 years after then president John F. Kennedy publicly announced – on May 25, 1961 – the goal of sending men to the moon and returning them safely to Earth. Less than a year later, John Glenn, in his Friendship 7 spacecraft, became the first American to orbit the Earth, opening the doors for Aldrin, Armstrong, and Collins to reach the moon on July 20, 1969. 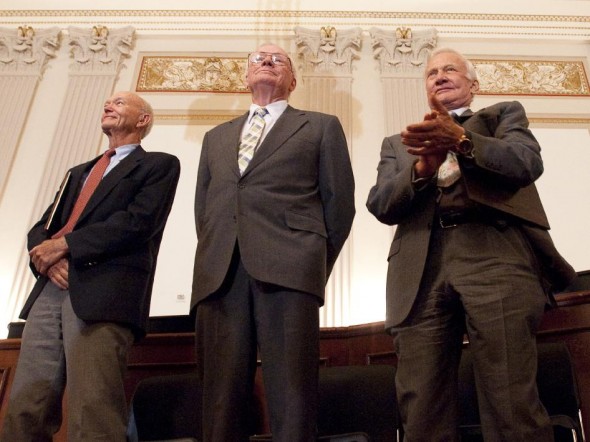 We stand on the shoulders of the extraordinary men we recognize today. Those of us who have had the privilege to fly in space followed the trail they forged. . . . From Mercury and Gemini, on through our landings on the Moon in the Apollo Program, their actions unfolded the will of a nation for the greater achievement of humankind.

Collins, the command module pilot on the Apollo 11 mission, carries the distinction of experiencing perhaps the most solitary moment in human history. While Aldrin and Armstrong walked on the moon, Collins remained in the command module, which was orbiting the moon. That solitary orbit gave Collins the distinction of being the first human to see the far side of the moon, where he lost communication with Earth and his fellow astronauts for minutes at a time. Because he was on the moon’s far side when the landing took place, Collins was unable to watch the landing happen live.

House Speaker John Boehner (R-Ohio) was also present at the ceremony. During his speech, he remarked how all four astronauts have displayed humility and downplayed their roles as “heroes.” Boehner said:

The world looks to America because we are free—it is our values to which people aspire. One of these values is humility—the idea that you’re part of a cause greater than yourself, that nothing in life is a do-it-yourself project.  Though an often unsung virtue, humility figured prominently in the pinnacle of human achievement. . . . Gentlemen: heroes or not, yours were heroic acts.  Today we add to your many honors, with respect and gratitude, the Congressional Gold Medal.

The astronauts themselves helped to design the medals, which feature profiles of all four men and a space-based view of Earth on one side and both Glenn’s craft and the Apollo craft on the reverse, orbiting Earth and the moon, respectively.