The Beagle 2 Lander, built by the U.K., and thought lost on Mars since 2003, has now been found in images from NASA’s Mars Reconnaissance Orbiter.

Images taken by NASA’s Mars Reconnaissance Orbiter have revealed the missing Beagle 2 Mars Lander, built by the United Kingdom, and lost on Mars since 2003.

A set of three observations with the orbiter’s High Resolution Imaging Science Experiment (HiRISE) camera shows Beagle 2 partially deployed on the surface of the planet, ending the mystery of what happened to the mission more than a decade ago. They show that the lander survived its December 25, 2003, touchdown enough to at least partially deploy its solar arrays.

Beagle 2 hitched a ride to Mars on the European Space Agency’s long-lived Mars Express mission. It was a collaboration between industry and academia designed to deliver world-class science from the surface of the Red Planet.

Every Christmas Day since 2003 I have wondered what happened to Beagle 2. My Christmas Day in 2003 alongside many others who worked on Beagle 2 was ruined by the disappointment of not receiving data from the surface of Mars. To be frank I had all but given up hope of ever knowing what happened to Beagle 2. The images show that we came so close to achieving the goal of science on Mars. 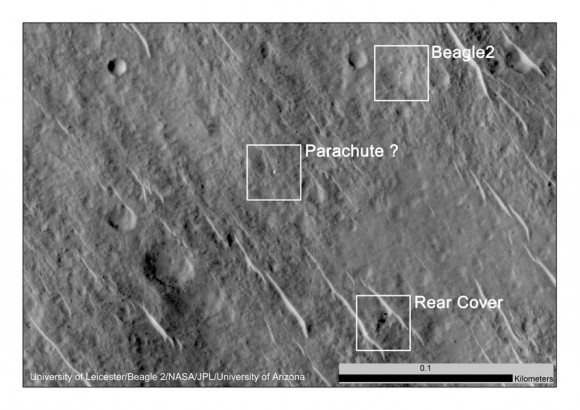 This annotated image shows where features seen in a 2014 observation by NASA’s Mars Reconnaissance Orbiter have been interpreted as hardware from the Dec. 25, 2003, arrival at Mars of the United Kingdom’s Beagle 2 Lander.

HiRISE images provided evidence for the lander and key descent components on the surface of Mars within the expected landing area of Isidis Planitia, an impact basin close to the equator. Subsequent re-imaging and analysis by the Beagle 2 team, the HiRISE team and NASA’s Jet Propulsion Laboratory, Pasadena, California, have confirmed that the targets discovered are of the correct size, shape, color and dispersion to be Beagle 2.

Analysis of the images indicates what appears to be a partially deployed configuration, with what is thought to be the rear cover with its pilot/drogue chute (still attached) and main parachute close by. Due to the small size of Beagle 2 (less than 7 feet, or 2 meters across for the deployed lander) it is right at the limit of detection of HiRISE, the highest-resolution camera orbiting Mars. The targets are within the expected landing area at a distance of about three miles (five kilometers) from its center.