Astronomers are beginning to find spiral structure in forming solar systems, which was earlier predicted by theory. 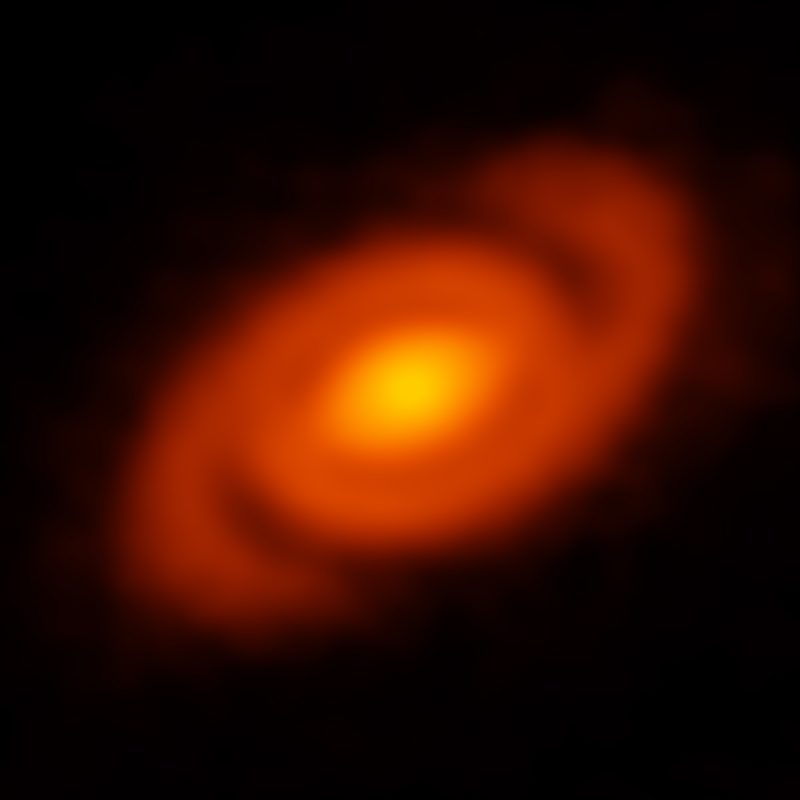 In 1920, two famous astronomers held what’s come to be called The Great Debate. At that time, spiral galaxies were called spiral nebulae, and no one knew if they were relatively near us or exceedingly far away. During the 1920 debate, Heber D. Curtis argued that the spiral nebulae were very distant, vast galaxies like our Milky Way, composed of stars. Harlow Shapley argued that our universe had just one galaxy – our Milky Way – and that the spiral nebulae were nearby gas clouds, perhaps forming solar systems. Over the decades, Curtis has been seen as correct; the spiral nebulae have turned out to be not nearby solar systems, but distant galaxies with their own billions of stars. But nature loves spirals. And now astronomers are beginning to find spiral structure in forming solar systems.

Astronomical theory suggests this should occur, but the phase of evolution must be brief and hard to catch. Now the powerful Atacama Large Millimeter/submillimeter Array (ALMA) – which went online officially as recently as March 2013 – has directly observed a spiral structure around the young star Elias 2-27. This is the first observation of its kind.

The sweeping spiral arms surround the central star are reminiscent of a spiral galaxy, but on a much smaller scale. 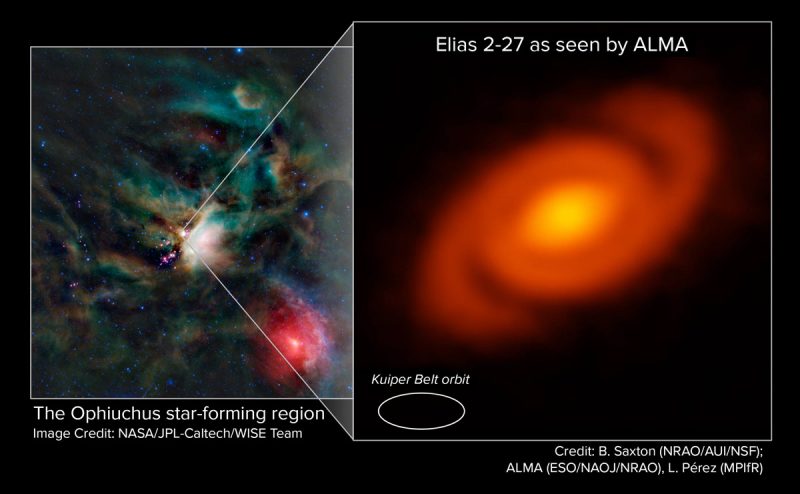 Elias 2-27 is located approximately 450 light-years from Earth in the direction to the constellation Ophiuchus the Serpent Bearer. It’s within what astronomers call the Ophiuchus star-forming complex, a region of space where many new stars are forming and one of the closest such regions to our sun.

The star Elias 2-27 contains only about half the mass of our sun, but has an unusually massive protoplanetary disk. The star is very young, only an estimated one million years old in contrast to four-and-a-half billion years for our sun. It’s still encased in the vast molecular cloud in space in which it is forming, which hides it from view as seen by optical telescopes. ALMA is capable of seeing at wavelengths that make this star and its unusual structure visible.

According to theory, a spiral structure should occur in forming solar systems due to the same physical process thought to give our Milky Way galaxy its spiral arms. That is, they are the product of what are called density waves – in this case, gravitational perturbations in the disks that surround young stars. A statement from the National Radio Astronomy Observatory said:

Previously, astronomers noted compelling spiral features on the surfaces of protoplanetary disks, but it was unknown if these same spiral patterns also emerged deep within the disk where planet formation takes place.

ALMA, for the first time, was able to peer deep into the mid-plane of a disk and discover the clear signature of spiral density waves.

Nearest to the star, ALMA found a familiar flattened disk of dust, which extends past what would be the orbit of Neptune in our own solar system.

Beyond that point, ALMA detected a narrow band with significantly less dust, which may be indicative of a planet in formation.

Springing from the outer edge of this gap are two sweeping spiral arms that extend more than 10 billion kilometers away from their host star.

Read more about this discovery from NRAO

Read more about this discovery from Rice University

A 1910 image of M51, which we now call the Whirlpool Galaxy. At the time, it was known as one of the mysterious spiral nebulae, which some astronomers thought were forming solar systems. We’ve come a long way! What will astronomers 100 years from now think? Photographic image of M51 spiral nebula by G. W. Ritchey, 1910, via harvard.edu .

Bottom line: Astronomers are beginning to find spiral structure in forming solar systems, which was earlier predicted by the theory of how planets should form in protoplanetary disks. The very young star Elias 2-27 is now known to have a spiral structure swirling around it.