Spring means rain showers, not just here on Earth but also almost 800 million miles away on Saturn’s largest moon, Titan. Scientists studying images obtained by NASA’s Cassini spacecraft found evidence of rain around the equator of Titan. The rain isn’t liquid water as on Earth, though. Instead, it’s methane.

This is the first time scientists have found an indication of rain in this arid region of Saturn’s moon.

The Cassini spacecraft – which launched from Earth in 1997 arrived at Saturn in 2004 – observed that cloud systems formed around Titan’s equator in late 2010. This time period corresponded with Saturn’s equinox, in other words beginning of northern hemisphere spring on this world. (Saturn and its system of moons take almost 30 Earth years to orbit the sun, so a season on Saturn lasts more than seven earthly years).

Taken in 1965 from NASA’s Gemini 4 spacecraft, this dark area is from a rain-soaked area in Texas. The areas received more than an inch of rain in the days before the photo. (Image: NASA/Johnson Space Center)

As northern spring began on Saturn, scientists noted darker areas on the surface of Titan apparently resulting from rain from the clouds. Similar darkening due to rain has been seen on Earth, from satellites in orbit. The color change on Titan was only temporary. Scientists considered other possibilities for causing the temporary darkening on Titan – such as large wind storms or volcanic events – but later ruled them out.

Scientists theorize that storms on Titan are part of a methane cycle on this distant moon, which is thought to be much like Earth’s water cycle. Methane fills lakes on Titan, saturates the clouds and apparently causes rainstorms. Elizabeth Turtle is a Cassini imaging team associate at the Johns Hopkins University Applied Physics Lab in Laurel, Md. She said in a press release:

It’s amazing to be watching such familiar activity as rainstorms and seasonal changes in weather patterns on a distant, icy satellite.

A thick atmosphere of nitrogen, methane and carbon-rich compounds hides the surface of Titan. In 2005, the European Space Agency’s Hugyens Probe penetrated Titan’s atmosphere and landed in a dry riverbed on the moon’s surface. Before landing, the probe provided scientists with a birds-eye view of a terrain very similar to Earth – with hills, valleys and drainage channels. The temperature on Titan is so frigid – hovering around -179 degrees Celsius – that water ice acts like rock and methane and ethane are liquid.

Cassini has been in orbit around the Saturn system since 2004 so has only captured data on one-fourth of a Titan year: late summer to early northern spring. As Cassini’s mission continues, scientists will be interested to see how Titan’s weather systems change with the seasons. Carolyn Porco is the Cassini imaging team lead at the Space Science Institute in Boulder, Co. She said in a press release:

It is patently clear that there is so much more to learn from Cassini about seasonal forcing of a complex surface-atmosphere system like Titan’s and, in turn, how it is similar to, or differs from, the Earth’s.

So there it is. We have another spellbinding example of nature at work in our solar system, and other amazing discovery by NASA’s Cassini spacecraft: evidence of spring rains around the equator of Saturn’s largest moon, Titan. 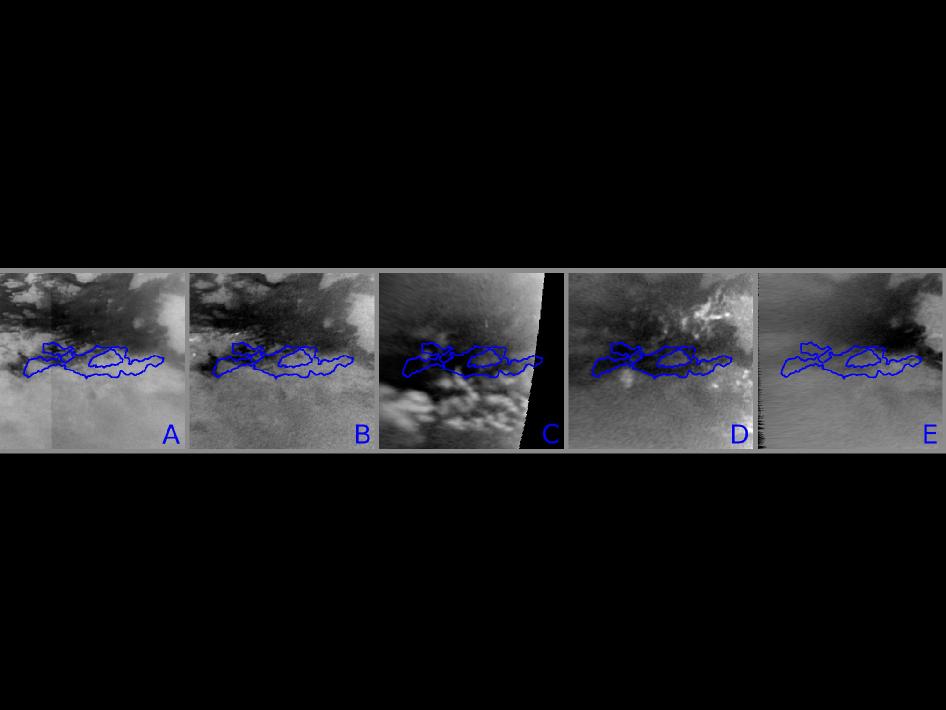