The energy emitted by these volcanic eruptions implies lava fountains gushing at a huge volume per second, forming lava flows that quickly spread over Io’s surface. 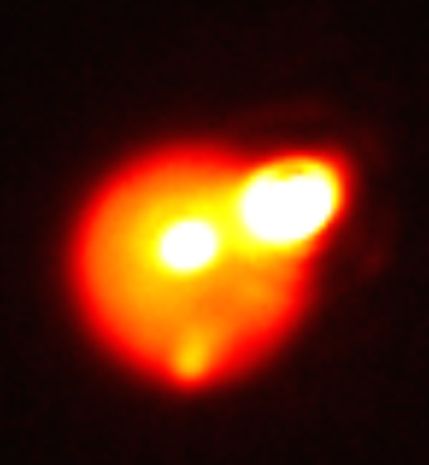 The Aug. 29, 2013, volcanic eruption on Io was among the largest ever observed on the most volcanically active body in the solar system. Infrared image taken by Gemini North telescope, courtesy of Katherine de Kleer, UC Berkeley.

Within a two-week period in August 2013, astronomers observed three massive volcanic eruptions on Jupiter’s moon Io. The grand finale was an eruption they say was one of the brightest volcanic eruptions ever observed in our solar system. These astronomers are speculating that these eruptions on Io – which can send material hundreds of miles above the little moon’s surface – might be much more common than they previously thought. The astronomers made these observations with the W. M. Keck Observatory and Gemini Observatory, both near the summit of Mauna Kea, itself a dormant volcano on the island of Hawaii. The first two eruptions took place on August 15, 2013, and a third and brightest eruption took place on August 29, 2013.

Scientists said that all three events were likely characterized by “curtains of fire,” as lava blasted out of fissures perhaps several miles long, in Io’s surface. University of California Berkeley astronomer Katherine de Kleer, who led one of a pair of two papers published today (August 4, 2014) in the journal Icarus, said:

We believe that it erupted in fountains from long fissures on Io’s surface, which were over 10,000 times more powerful than the lava fountains during the 2010 eruption of Eyjafjallajokull, Iceland, for example.

All of these volcanic eruptions caused vast lava flows on Io. The brighter of the two August 15 eruptions was calculated to have produced a 50 square-mile, 30-foot thick lava flow. The other August 15 eruption produced flows covering 120 square miles. The third and brightest eruption on August 29 appeared, at the time of the observation, to cover an area of up to 32 square miles.

Imke de Pater, professor and chair of astronomy at the University of California, Berkeley, and lead author of the other paper published in Icarus, said:

We typically expect one huge outburst [from Io] every one or two years, and they’re usually not this bright. Here we had three extremely bright outbursts, which suggest that if we looked more frequently we might see many more of them on Io.

Io is the innermost of Jupiter’s four large Galilean moons. It’s about 2,300 miles across (about the size of Earth’s moon). It’s the only known place in our solar system where volcanoes erupt and produce extremely hot lava like that seen on Earth. Io’s volcanism is caused by the tidal push-and-pull of massive Jupiter, which heats the satellite’s interior – making it our solar system’s most volcanically active known body.

Because of Io’s low gravity, large volcanic eruptions produce an umbrella of debris that rises high into space, feeding a doughnut of ionized gas – the Io plasma torus – that surrounds Jupiter near Io’s orbit.

Read more about the August 2013 volcanic eruptions on Io from the W.M. Keck Observatory. 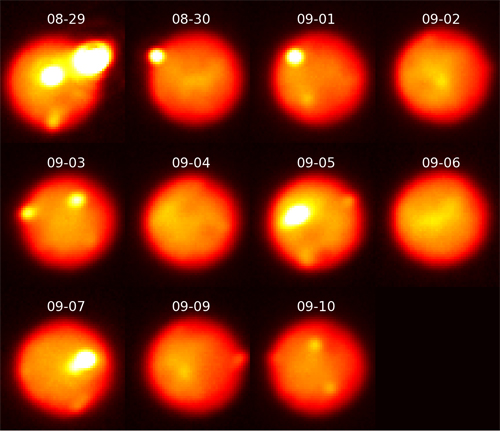 Images of Io taken in the near-infrared with adaptive optics at the Gemini North telescope tracking the evolution of the brightest eruption – on August 29, 2013 – as it decreased in intensity over 12 days. Due to Io’s rapid rotation, a different area of the surface is viewed on each night; the outburst is visible with diminishing brightness on August 29 and 30 and September 1, 3, and 10. Image via Katherine de Kleer/UC Berkeley/Gemini Observatory/AURA

Bottom line: Within a two-week period in August 2013, astronomers observed three massive volcanic eruptions on Jupiter’s moon Io. The grand finale was an eruption they say was one of the brightest volcanic eruptions ever observed in our solar system. The energy emitted by these volcanic eruptions implies lava fountains gushing at a huge volume per second, forming lava flows that quickly spread over Io’s surface.