Flipped orbits for some hot Jupiters

If planets form from a vast rotating cloud of gas, with a central star spinning in its center, how does a planet come to orbit in a direction opposite its star?

Astronomers have discovered more than 500 extrasolar planets – planets that orbit stars other than the sun – since 1995. But only in the last few years have astronomers observed that – in some of these systems – the star is spinning one way and the planet is orbiting in the opposite direction. That seems strange, since planets are thought to form from huge rotating clouds of gas and dust, with a similarly spinning star in its midst.

Known stars that do this are “hot Jupiters” – huge planets as massive as the largest planet in our solar system – but orbiting very close to their central star. Details of a study explaining the phenomenon will appear May 12, 2011 in the journal Nature. 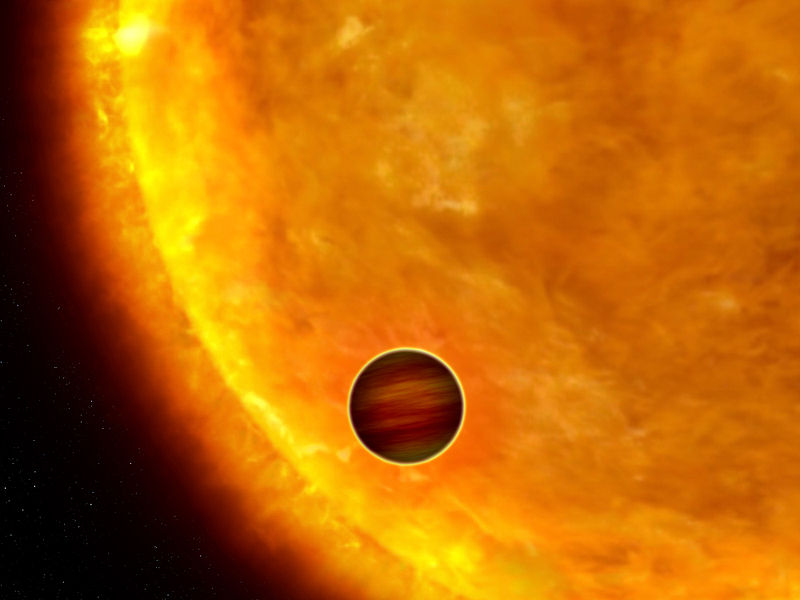 Frederic A. Rasio, a theoretical astrophysicist at Northwestern University, is senior author of the paper. He said:

That’s really weird, and it’s even weirder because the planet is so close to the star. How can one be spinning one way and the other orbiting exactly the other way? It’s crazy. It so obviously violates our most basic picture of planet and star formation.

Figuring out how these huge planets got so close to their stars led Rasio and his research team to explore their flipped orbits. Using large-scale computer simulations, they are the first to model how a hot Jupiter’s orbit can flip and go in the direction opposite to the star’s spin. Gravitational perturbations by a much more distant planet can result in the hot Jupiter having both a “wrong way” and a very close orbit, according to these simulations.

Once you get more than one planet, the planets perturb each other gravitationally. This becomes interesting because that means whatever orbit they were formed on isn’t necessarily the orbit they will stay on forever. These mutual perturbations can change the orbits, as we see in these extrasolar systems.

In explaining the peculiar configuration of an extrasolar system, the researchers also have added to our general understanding of planetary system formation and evolution and reflected on what their findings mean for our solar system, consisting of our sun, Earth and other planets.

We had thought our solar system was typical in the universe, but from day one everything has looked weird in the extrasolar planetary systems. That makes us the oddball, really. Learning about these other systems provides a context for how special our system is. We certainly seem to live in a special place.

The physics the research team used to solve the problem is basically orbital mechanics, Rasio said – the same kind of physics NASA uses to send satellites around the solar system.

Smadar Naoz, a postdoctoral fellow at Northwestern and a Gruber Fellow, said:

It was a beautiful problem because the answer was there for us for so long. It’s the same physics, but no one noticed it could explain hot Jupiters and flipped orbits.

Doing the calculations was not obvious or easy. Some of the approximations used by others in the past were really not quite right. We were doing it right for the first time in 50 years, thanks in large part to the persistence of Smadar. It takes a smart, young person who first can do the calculations on paper and develop a full mathematical model and then turn it into a computer program that solves the equations. This is the only way we can produce real numbers to compare to the actual measurements taken by astronomers.

In their model, the researchers assume a star similar to the sun, and a system with two planets. The inner planet is a gas giant similar to Jupiter, and initially it is far from the star, where Jupiter-type planets are thought to form. In this simulated system, the outer planet is also fairly large and is farther from the star than the first planet. It interacts with the inner planet, perturbing it and shaking up the system.

The effects on the inner planet are weak but build up over a very long period of time, resulting in two significant changes in the system. First, the inner gas giant begins orbiting very close to its star. Second, that planet’s orbit goes in the opposite direction of the central star’s spin. The changes occur, according to the model, because the two orbits are exchanging angular momentum, and the inner one loses energy via strong tides.

The gravitational coupling between the two planets causes the inner planet to go into an eccentric, needle-shaped orbit. It has to lose a lot of angular momentum, which it does by dumping it onto the outer planet. The inner planet’s orbit gradually shrinks because energy is dissipated through tides, pulling in close to the star and producing a hot Jupiter. In the process, the orbit of the planet can flip.

Only about a quarter of astronomers’ observations of these hot Jupiter systems show flipped orbits. The Northwestern model needs to be able to produce both flipped and non-flipped orbits, and it does, Rasio said.

Bottom line: A study explaining the flipped orbits of hot Jupiter-like planets will appear May 12 in the journal Nature. A Northwestern University research team used orbital mechanics to explain the phenomenon. Their work shows the workings of our own solar system to be unique.