The first Earth-sized exoplanet orbiting within the habitable zone of another star has been confirmed. The new planet, dubbed Kepler-186f, was discovered using NASA’s Kepler telescope. 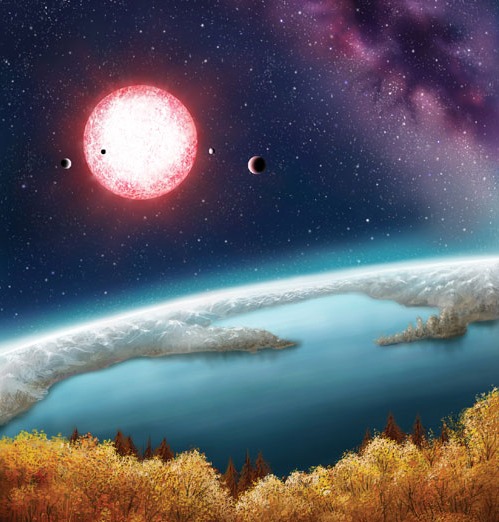 The artist’s concept depicts Kepler-186f, the first validated Earth-size planet orbiting a distant star in the habitable zone—a range of distances from a star where liquid water might pool on the surface of an orbiting planet. The discovery of Kepler-186f confirms that Earth-size planets exist in the habitable zone of other stars and signals a significant step closer to finding a world similar to Earth. Art Credit: Danielle Futselaar.

An international team of researchers have announced the discovery of a new rocky planet that could potentially have liquid water on its surface.

The new planet, dubbed Kepler-186f, was discovered using NASA’s Kepler telescope, launched in March 2009 to search for habitable zone, Earth-sized planets in our corner of the Milky Way Galaxy. A habitable zone planet orbits its star at a distance where any water on the planet’s surface is likely to stay liquid. Since liquid water is critical to life on Earth, many astronomers believe the search for extraterrestrial life should focus on planets where liquid water occurs.

“Some people call these habitable planets, which of course we have no idea if they are,” said Kane, an assistant professor of physics and astronomy. “We simply know that they are in the habitable zone, and that is the best place to start looking for habitable planets.”

Kepler-186f is the fifth and outermost planet discovered orbiting around the dwarf star Kepler-186. The planets were discovered by the transit method, which detects potential planets as their orbits cross in front of their star and cause a very tiny but periodic dimming of the star’s brightness. 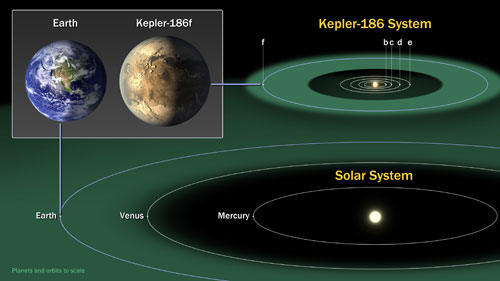 Kepler-186 and the Solar System: The diagram compares the planets of the inner solar system to Kepler-186, a five-planet system about 500 light-years from Earth in the constellation Cygnus. The five planets of Kepler-186 orbit a star classified as a M1 dwarf, measuring half the size and mass of the sun. The Kepler-186 system is home to Kepler-186f, the first validated Earth-size planet orbiting a distant star in the habitable zone—a range of distances from a star where liquid water might pool on the surface of an orbiting planet. Kepler-186f is less than ten percent larger than Earth in size, but its mass and composition are not known. Kepler-186f orbits its star once every 130-days and receives one-third the heat energy that Earth does from the sun, placing it near the outer edge of the habitable zone. Image credit: NASA Ames/SETI Institute/JPL-CalTech

After the astronomers were able to confirm that Kepler-186f was a planet, they used the transit information to calculate the planet’s size. Kepler-186f is slightly bigger than Earth, measuring about 1.1 Earth radii. (An Earth radius is the distance from the Earth’s center to its surface). The researchers don’t know yet what the mass of the planet might be, but they can make an estimate based on other planets of similar radii, Kane noted.

Having the mass and radius of a planet allows the astronomers to calculate other features such as a planet’s average density, “and once you know the average density of a planet, then you can start to say whether it’s rocky or not,” Kane explained.

“What we’ve learned, just over the past few years, is that there is a definite transition which occurs around about 1.5 Earth radii,” he continued. “What happens there is that for radii between 1.5 and 2 Earth radii, the planet becomes massive enough that it starts to accumulate a very thick hydrogen and helium atmosphere, so it starts to resemble the gas giants of our solar system rather than anything else that we see as terrestrial.”

The planet’s size influences the strength of its gravitational pull, and its ability to pull in abundant gases like hydrogen and helium. At Kepler-186f’s size, there is a small chance that it could have gathered up a thick hydrogen and helium envelope, “so there’s a very excellent chance that it does have a rocky surface like the Earth,” Kane said.

Rocky planets like Earth, Mars and Venus gained their atmospheres as volcanic gasses like carbon dioxide and water vapor were released from the planets’ interiors. Habitable zone planets like Earth orbit at a distance from a star where water vapor can stay liquid on the surface. Planets like Venus that orbit a little closer to the sun lose their liquid water and are cloaked mostly in carbon dioxide. Planets like Mars that orbit further out from the sun than Earth have their liquid water locked up as ice.

Kepler-186f appears to be orbiting at the outer edge of the habitable zone around its star, which could mean that any liquid surface water would be in danger of freezing, Kane said. “However, it is also slightly larger than the Earth, and so the hope would be that this would result in a thicker atmosphere that would provide extra insulation” and make the surface warm enough to keep water liquid.

Although Kepler-186f shows exciting signs of being Earth-like, Kane points out that its differences are also fascinating.

“We’re always trying to look for Earth analogs, and that is an Earth-like planet in the habitable zone around a star very much the same as our sun,” said Kane, who is the chair of Kepler’s Habitable Zone Working Group. “This situation is a little bit different, because the star is quite different from our sun.”

Kepler-186 is an M-dwarf star, much smaller and cooler than the sun. These stars are numerous in our galaxy, and have some features that make them promising places to look for life. “For example, small stars live a lot longer than larger stars,” Kane explained, “and so that means there is a much longer period of time for biological evolution and biochemical reactions on the surface to take place.”

On the other hand, small stars tend to be more active than stars the size of our sun, sending out more solar flares and potentially more radiation toward a planet’s surface.

“The diversity of these exoplanets is one of the most exciting things about the field,” Kane said. “We’re trying to understand how common our solar system is, and the more diversity we see, the more it helps us to understand what the answer to that question really is.”