It was an M-class flare, and it might have produced a brief communications blackout on Monday night. But no CME – coronal mass ejection – is headed our way.

Giant magnetic loops dance on the sun’s horizon as a solar flare erupts on January 12-13, 2015. Image via NASA/SDO.

Solar flares are powerful bursts of radiation from the sun, which release potentially harmful radiation. In this case, there was no significant coronal mass ejection (CME) emerging from the site of the flare. That means there will be no increased sun-Earth interaction with this event, and no geomagnetic storms as a result, and thus no possibility of intense auroras caused by this flare (although the auroral displays over the past few days have been pretty good, anyway).

Radiation from a solar flare, by the way, cannot pass through Earth’s atmosphere to affect humans on the ground, but an extremely intense flare can disturb Earth’s atmosphere in the layer where GPS and communications signals travel.

This solar flare caused a pulse of extreme UV radiation, which ionized Earth’s upper atmosphere over Australia and the Indian Ocean and may have caused a brief communications blackout at frequencies below about 10 MHz. See the map below.

Mariners and ham radio operators may have noticed a brief communications blackout at frequencies below about 10 MHz, on the night of January 12, 2015, over Australia and the Indian Ocean. This map from NOAA shows the affected region. Image via Spaceweather.com via NOAA 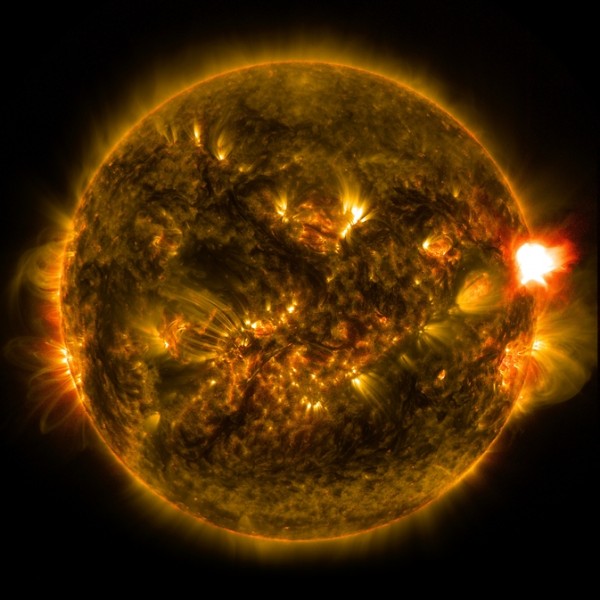 A flare erupts from the right side of the sun in this image from shortly before midnight EST on January 12, 2015. The image blends two wavelengths of light — 171 and 304 angstroms — as captured by NASA’s Solar Dynamics Observatory. Image via NASA/SDO

Bottom line: The first notable solar flare of 2015 was an M-class flare that took place during the night of January 12, according to clocks in North America. There was no CME from the flare, and, although there might have been a brief communications blackout last night, no further effects are expected.