A camera on board ESA’s ExoMars mission has returned its first images from orbit. It was meant to be a test, but the images are spectacular.

The video above starts slow. But click ahead to about 1:39, and you’ll start a wonderful sequence where you appear to be flying over the surface of the planet Mars, specifically the martian Hebes Chasma, which is situated just north of the great Valles Marineris canyon system of Mars. Very wonderful! Images to make this video were released on November 29, 2016 by the University of Bern in Switzerland. They’re from a camera called CaSSIS (Colour and Stereo Surface Imaging System), on ESA’s ExoMars mission. The team said that the camera is working “almost perfectly.” Exciting new images of Mars ahead!

Nicolas Thomas at the University of Bern led the team that developed CaSSIS. It launched with our world’s newest mission to Mars – the European Space Agency’s ExoMars mission – on March 14, 2016 and entered orbit around Mars on October 19. These researchers’ statement explained:

[The ExoMars spacecraft] is currently in a highly elliptical orbit of just over 4 days duration. The spacecraft comes within 250 kilometers [150 miles] of the surface for a very short period but then goes out to over 100,000 kilometers [62,000 miles] from the planet. CaSSIS has imaged during two of these close approaches to test its capabilities and functions. The first approach occurred on November 22.

A feature called Arsia-Chasmata, on the blanks of a martian volcano Arsia Mons. Width of this image is about 15 miles (25 km). Image via ESA/ Roscosmos/ EsoMars/ CaSSIS/ UniBE.

The team is testing the camera now, but in the next months will be starting preparations for the prime mission. Eventually, the spacecraft will use aerobraking – skimming into Mars’ thin atmosphere – to slow the spacecraft down and enter a roughly circular orbit 400 km above the surface. This process will start in March 2017 and take around 9-12 months.

The primary science phase will start around the end of 2017.

The imaging technique used by CaSSIS is called ‘push-frame.’ It takes short exposures (framelets) at a very rapid rate and these images are put together on ground to produce the final product. For Hebes Chasma, the framelets were acquired with 700 microseconds exposure time at a rate of one framelet every 150 milliseconds.

The ExoMars mission also included a test lander – Schiaparelli – that was supposed to soft-land on Mars on October 19. The landing was not as soft as expected after its thrusters switched off prematurely. Radio telescopes on Earth didn’t hear from the lander again, and, later, another spacecraft in orbit around Mars caught a glimpse of its crash site. 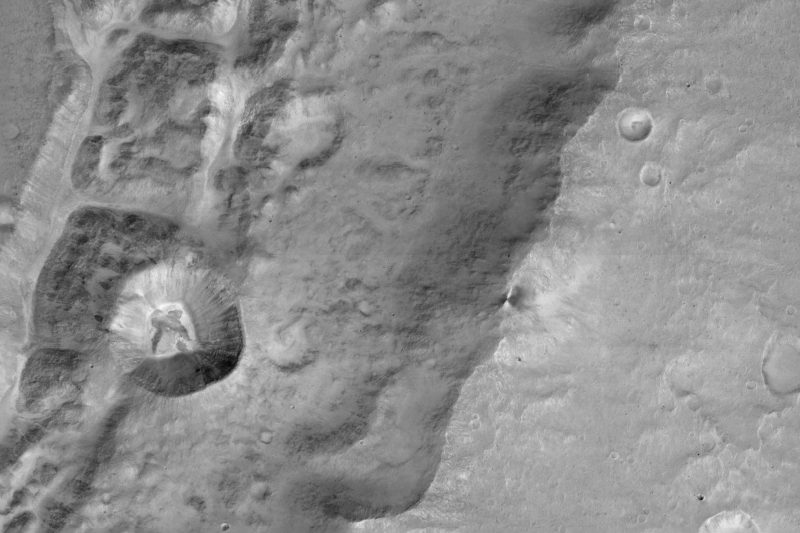 A mile-wide (1.4 km) crater on the rim of a larger crater near Mars’ equator, as seen from CaSSIS. Image via ESA/ Roscosmos/ EsoMars/ CaSSIS/ UniBE.