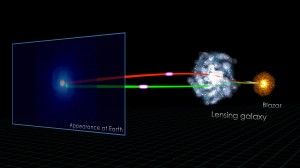 the components of a gravitational lens system known as B0218+357. Different sight lines to a background blazar result in two images that show outbursts at slightly different times. NASA’s Fermi made the first gamma-ray measurements of this delay in a lens system.

Thank you! Your submission has been received!
Oops! Something went wrong while submitting the form.
END_OF_DOCUMENT_TOKEN_TO_BE_REPLACED