First evidence for water-ice clouds outside our solar system

The first evidence for water-ice clouds on an object beyond our solar system. It’s a brown dwarf, one of our closest neighbors, only 7 light-years away. 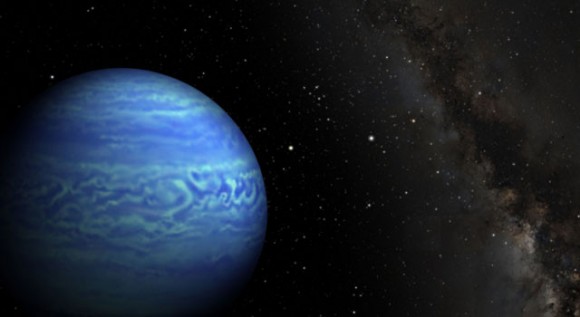 Artist’s concept of brown dwarf W0855, one of the closest brown dwarfs to our sun at only 7 light-years away. Recent evidence suggests water-ice clouds in the atmosphere of W0855. Image courtesy of NASA/JPL-Caltech/Penn State University

The findings come from observations made the Las Campanas Observatory in Chile by Jacqueline Faherty and a team from Carnegie Institution for Science. These astronomers used a near-infrared camera to detect an object called WISE J085510.83-071442.5, or W0855. This object was first seen by NASA’s Wide-Field Infrared Explorer satellite; it wasn’t known if ground-based observatories would be able to spot it.

The team acquired 151 images of W0855, taken over three nights. Then they combined the images.

A comparison of the team’s near-infrared images of W0855 with models for predicting the atmospheric content of brown dwarfs showed evidence of frozen clouds of sulfide and water.

Brown dwarfs are sometimes described as hybrids, between planets and stars in mass. They are somewhat similar to the gas giant planets in our solar system, which also have water-ice clouds. W0855, in particular, is the fourth-closest known system to our own sun, practically a next-door neighbor in astronomical terms at only about 7 light-years away. W0855 is also the coldest brown dwarf yet known, with a temperature between 225 to 260 K (-55 to 8 °F). 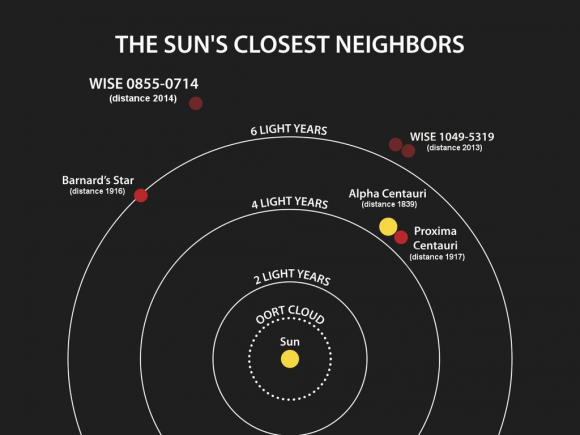 Stars near our sun, via NASA/ JPL

Bottom line: Astronomers have found the first evidence for water-ice clouds on an object beyond our solar system. It’s a brown dwarf, called WISE J085510.83-071442.5, or W0855. This object is one of our closest neighbors, only 7 light-years away.