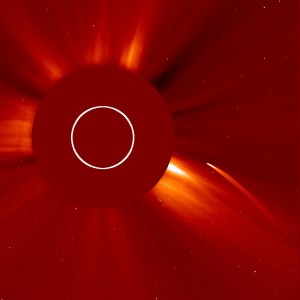 The Solar and Heliospheric Observatory (SOHO) captured this beautiful image of Comet C/2011 N3 as it dived toward the sun on July 5 and July 6, 2011. The sun’s bright light is blocked out by a coronograph. Credit: SOHO (ESA & NASA)

Thank you! Your submission has been received!
Oops! Something went wrong while submitting the form.
END_OF_DOCUMENT_TOKEN_TO_BE_REPLACED