Looking beyond the rings of Saturn, Uranus is that tiny blue dot in the upper left in this first ever image of the planet, taken by NASA’s Cassini spacecraft. 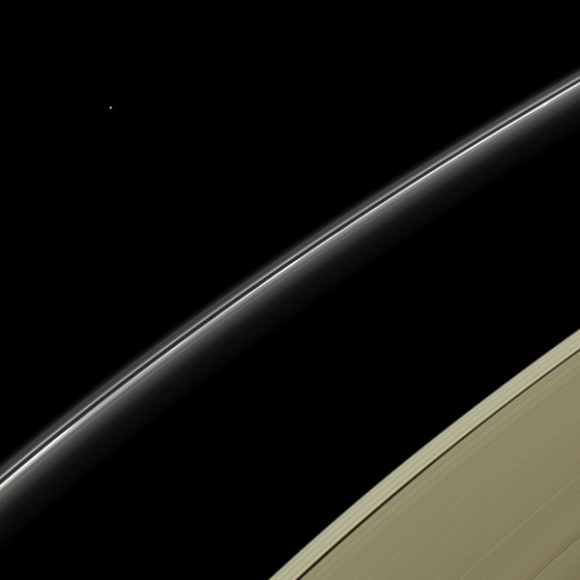 NASA’s Cassini spacecraft has captured its first-ever image of the pale blue ice-giant planet Uranus in the distance beyond Saturn’s rings.

The robotic spacecraft briefly turned its gaze away from the ringed beauty of Saturn on April 11, 2014, to observe the distant planet, which is the seventh planet from the sun.

The planets Uranus and Neptune are sometimes referred to as “ice giants” to distinguish them from their larger siblings, Jupiter and Saturn, the classic “gas giants.” The moniker derives from the fact that a comparatively large part of the planets’ composition consists of water, ammonia and methane, which are typically frozen as ices in the cold depths of the outer solar system. Jupiter and Saturn are made almost entirely of hydrogen and helium, with smaller percentages of these ices.

When this view was obtained, Uranus was nearly on the opposite side of the sun as seen from Saturn, at a distance of approximately 28.6 astronomical units from Cassini and Saturn. An astronomical unit is the average distance from Earth to the sun, equal to 93 million miles (150 million kilometers). At their closest – once during each Saturn orbit of nearly 30 years – the two planets approach to within about 10 astronomical units of each other.

In addition to its aesthetic appeal, Cassini’s view of Uranus also serves a practical purpose. Scientists working on several of Cassini’s science investigations expect that they will be able to use images and spectra from these observations to help calibrate their own instruments.