First named feature on a comet!

Scientists have named one of the largest boulders on Rosetta’s comet after an Egyptian pyramid. 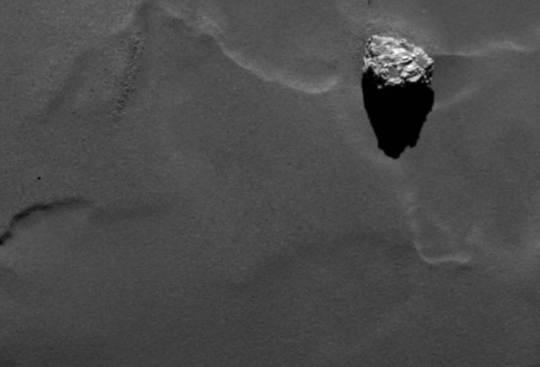 Close-up of the boulder Cheops as it casts a long shadow on the surface of Comet 67P/Churyumov-Gerasimenko. Cheops is 45 meters (50 yards) across. It’s the largest structure within an a group of boulders located on the lower side of the comet’s larger lobe. The Rosetta spacecraft captured this image on September 19, 2014 from a distance of 28.5 kilometers (17 miles). Image via ESA/Rosetta/MPS for OSIRIS Team MPS/UPD/LAM/IAA/SSO/INTA/UPM/DASP/IDA 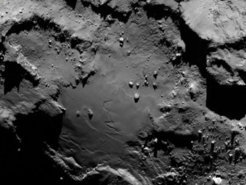 The group of boulders in the center of this image reminded scientists of the Giza Necropolis. The largest boulder has therefore been named Cheops. Image via ESA/Rosetta/MPS for OSIRIS Team MPS/UPD/LAM/IAA/SSO/INTA/UPM/DASP/IDA

Prior to this past August, we’d never flown side by side with a comet. But now the great Rosetta spacecraft of European Space Agency (ESA) is indeed flying in tandem with Comet 67P/Churyumov-Gerasimenko and will continue to match the comet’s path as it approaches its perihelion – closest point to the sun – in July 2015. This November, Rosetta will drop a lander on the comet. The big news today, though (October 9, 2014), is that one of the large boulders observed on the comet’s surface has been named. Scientists are calling it Cheops after the largest pyramid within the Giza Necropolis in Egypt. They gave it this name because it’s one of a cluster of boulders that reminded the scientists of the pyramids of Giza.

Why haven’t scientists named featured on a comet before this? Because we’ve never seen a comet from anywhere near this close. The photo of Cheops at the top of this page is from a distance of 28.5 kilometers (17 miles).

ESA says the boulder-like structures that Rosetta has revealed on the surface of 67P in the past months are among the comet’s most striking and mysterious features. And they are! You can’t help but wonder what will become of them as the comet nears the sun and releases more and more jets from its volatile surface. Will Cheops survive intact as the comet reaches its upcoming perihelion? Will it move at all? It’ll be so much fun to find out over the coming year.

In a press release, ESA said about the newly named boulder Cheops and other boulders on the comet’s surface:

Apart from their size distribution, almost all properties of 67P’s many boulders are still a mystery to researchers. What material are they made of? What are their physical properties such as density and stability? How where they created? As OSIRIS continues to monitor the comet’s surface in the next months the [mission] team hopes for clues.

The space agency added that, if, for example, the boulders are exposed by cometary activity or are displaced following the comet’s gravity field, they should be able to track this down in the Rosetta images.

Isn’t Rosetta the most exciting space mission ever? Tomorrow – October 10, 2014 – Rosetta will begin its Close Observation Phase reaching a distance of only 10 kilometers (6 miles!) from the comet’s surface. 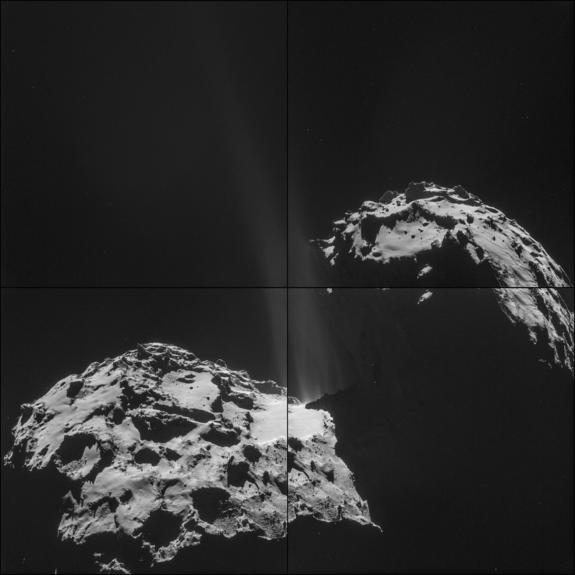 View larger. | This jet recently appeared on Comet 67P/Churyumov-Gerasimenko. Image taken September 26. More and more jets will begin sprouting from the comet’s surface as it draws in closer to the sun in early 2015. Image via ESA/Rosetta/NAVCAM. Read more about this image.

Bottom line: Scientists have named one of the largest boulders on Rosetta’s comet Cheops, after an Egyptian pyramid.