Hundreds of witnesses have filed reports with the American Meteor Society about a large, bright, long-lasting fireball over the U.S. East Sunday evening.

The American Meteor Society (AMS) says that hundreds of witnesses have filed reports of a large, bright, long-lasting fireball – an exceptionally bright meteor – seen over the U.S. East (New England) on Sunday evening, January 12, 2014. The time was 5:20 p.m. EST (2220 UTC). According to Mike Hankey of the AMS:

Witnesses reported the brightness greater than the full moon. 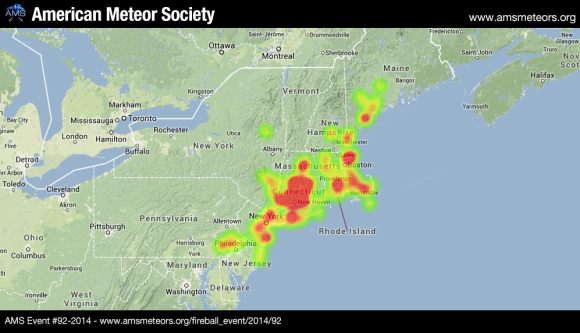 From any one spot on Earth, it’s rare to see a meteor as bright as the moon. But meteors of this brightness are not uncommon, given the Earth as a whole. They typically result from chunks of space debris entering our atmosphere. In recent years, due to increasing interconnectivity between people, we hear about these meteors more often!

Bottom line: The U.S. East was treated to a large, bright fireball – as bright as the moon, according to reports – on Sunday evening, January 12, 2014.