Find black holes while you’re on the bus

“With a large enough sample from your classifications, we can pick out black holes at different stages and build a better picture of their origins.” – Radio Galaxy Zoo 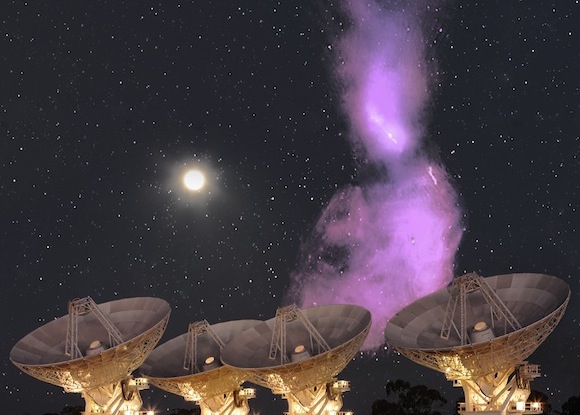 View larger. | This is two images spliced together. The purple cloud is Centaurus A, a giant galaxy with a supermassive black hole, typical of the galaxies in Radio Galaxy Zoo. Optical photo of stars, moon and radio telescopes by S. Amy. Centaurus A radio image by I. Feain et al.

Got some time on your hands? Want to discover supermassive black holes at the cores of distant galaxies? If so, while the guy sitting next to you on the bus is checking his Facebook page, you could be participating in a new citizen science project called Radio Galaxy Zoo, which launched this week (December 18, 2013). Organizers say it takes about a minute to learn to match galaxy images with radio images from CSIRO’s Australia Telescope. Once you learn, you can work out if a galaxy has a supermassive black hole at its core.

Go to Radio Galaxy Zoo to get started

CSIRO’s Dr Julie Banfield is an Australian coordinator of the international project. She said:

To work with the images takes only a few seconds each — perhaps a couple of minutes for the really tough ones.

Why do astronomers need your help? The most important reason is that there are billions of galaxies in the universe. These astronomers say they’ve got a pretty good theoretical handle on the small black holes (those with a few to tens of times our sun’s mass) thought to populate our own galaxy, the Milky Way. But supermassive black holes – while thought to reside in the core nearly every galaxy – are not as well understood. To study them, astronomers first have to find them.

That’s where you come in. According to Radio Galaxy Zoo’s website:

… we want to identify as many black hole/jet pairs as possible and associate them with their host galaxies; with a large enough sample (from your classifications), we can pick out black holes at different stages and build a better picture of their origins.

So join up! You’ll become part of the Zooniverse community – almost a million citizen scientists from around the world who work on projects covering everything from galaxy shapes to cancer data to whale songs.

Bottom line: Radio Galaxy Zoo is a new citizen science project aimed at locating supermassive black holes at the cores of distant galaxies. Info here on how to join.