Violent origins for an Australian meteorite

It was apparently born in an asteroid collision 3.6 billion years ago. 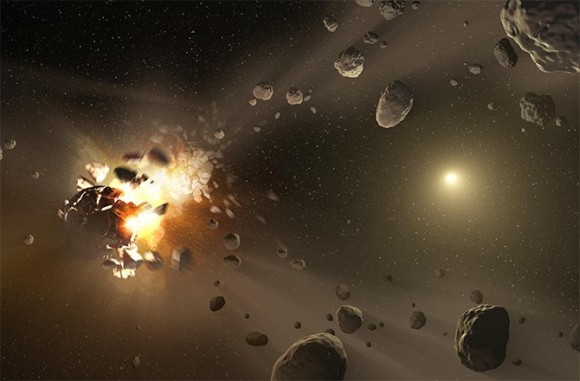 On 20 July 2007, two cameras of the Nullarbor Desert Fireball Network in Australia tracked the fall of a meteor. This tracking aided in the meteorite’s quick recovery from the Australia’s Nullarbor Plain. Today, the Bunburra Rockhole meteorite is well-known meteorite and the first meteorite ever found solely from data acquired by cameras as it blasted its way through Earth’s atmosphere. And now, after isotopic testing, the meteorite’s origins are being revealed. Researchers now believe the meteorite originated from an asteroid that no longer exists, and that was fragmented in an asteroid collision 3.6 billion years ago. Research leading to this conclusion has been accepted for publication in the journal Geochimica et Cosmochimica Acta.

This (meteorite) has a particular composition — which makes us think that it comes from a different body that has not been sampled before.

Most basaltic meteorites are thought to originate from the massive 500-kilometer wide asteroid (or protoplanet) Vesta that occupies the solar system’s main asteroid belt. Basaltic rock forms from volcanic activity and it is believed that early in Vesta’s formation 4.5 billion years ago, vulcanism extinguished the majority of Vesta’s heat. Therefore, any basaltic meteorites originating from Vesta can be dated to 4.5 billion years old.

But through isotopic analysis of the Bunburra Rockhole specimen, the basaltic rock’s dateline was reset around 3.6 billion years ago.

Given our current understanding of laws of physics, the scientists said, there’s no way to understand how vulcanism could have occurred on an asteroid at this late date.

Thus the Bunburra Rockhole meteorite must have originated from an energetic asteroid collision, an event that would have been common 3.6 billion years ago.

Jourdan pointed out that there are no other known meteorites with this specific chemistry. Thus, he said, meteorites like Bunburra Rockhole must be very rare. It’s likely the parent asteroid was completely destroyed by a single collision event.

Bottom line: On 20 July 2007, two cameras of the Nullarbor Desert Fireball Network (DFN) detected the fall of a meteorite. It was later recovered and became known as the Bunburra Rockhole meteorite. Now, after isotopic testing, the meteorites origins are revealed. Scientists believe it was born in an asteroid collision 3.6 billion years ago.