Faster-than-light travel: Are we there yet? 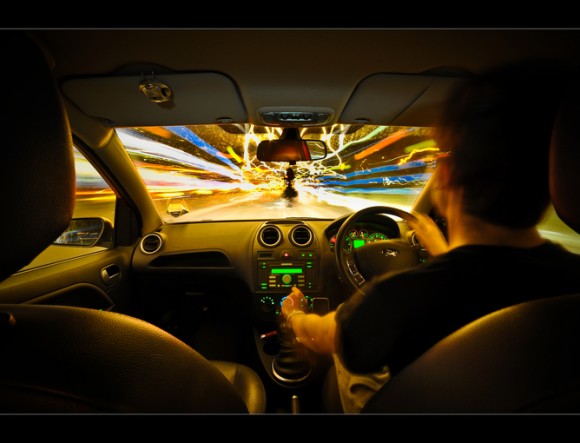 I can get you there fast! Image credit: Craig Cormack

Long before the Empire struck back, before the United Federation of Planets federated, Isaac Asimov created Foundation, the epic tale of the decline and fall of the Galactic Empire. Asimov’s Empire comprised 25 million planets, knit together by sleek spaceships hurtling through the galaxy.

And how did these spaceships cross the vast gulf between the stars? By jumping through hyperspace, of course, as Asimov himself explains in Foundation:

Travel through ordinary space could proceed at no rate more rapid than that of ordinary light… and that would have meant years of travel between even the nearest of inhabited systems. Through hyper-space, that unimaginable region that was neither space nor time, matter nor energy, something nor nothing, one could traverse the length of the Galaxy in the interval between two neighboring instants of time.

What the heck is Asimov talking about? Did he know something about a secret theory of faster-than-light travel? Hardly. Asimov was participating in a grand science fiction tradition: when confronted with an immovable obstacle to your story, make something up.

You can’t beat the speed of light

The problem is that as far as we know, faster-than-light travel is impossible, making galactic empires, federations, confederacies and any other cross-galaxy civilizations impossible. But that’s so inconvenient. To evade the cosmic speed limit science fiction has created “warp-drives,” “hyperspace,” “subspace,” and other tricks that have become so ingrained, fans of science fiction don’t give them a second thought.

Everyone knows what the Enterprise is doing when it does this:

Or when the Millennium Falcon does this:

Or when the Jupiter 2… actually the Robinson family tried to get to Alpha Centauri without any special effects: 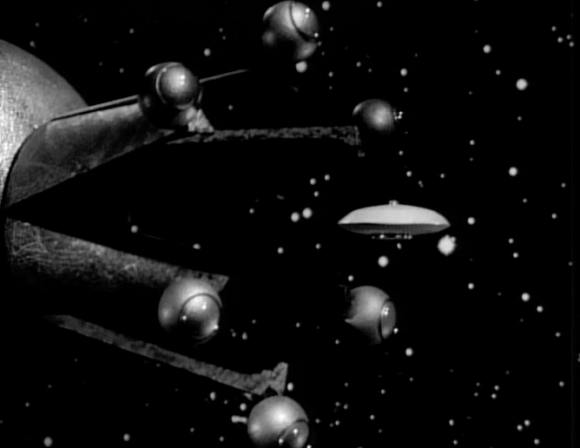 No wonder they got lost in space.

Why can’t we really exceed the speed of light? After all, people used to talk about a “sound barrier” up until the barrier was broken. But the speed of light is a much tougher barrier to crack. When scientists developed the theory of light back in the 19th century, it came with a special puzzle: their theory seemed to show that every observer should measure the same speed for light, about 186,000 miles per second. But that means if you try to chase a beam of light, no matter how fast you move, the light beam will still fly away from you at 186,000 miles per second. And what’s even more bizarre is that if you are moving at 99% of the speed of light, and your friend is standing still, both of you will see the light moving away at exactly the same speed.

Many scientists back then didn’t really believe this odd prediction, and the American physicist Albert Michelson (along with his collaborator Edward Morley) set out to measure how the speed of light would change due to the motion of the earth through space. But their famous Michelson-Morley experiment found no change at all. The speed of light seemed to be the same regardless of whether they measured it in the same direction the earth was moving, or in some other direction – a rare example of a non-discovery that turned out to be more important than a discovery!

Instead of trying to explain away this bizarreness, Albert Einstein embraced it. He built an entire theory, called special relativity, around the idea that the speed of light is the same for everyone who measures it, no matter how fast they are moving in relation to the light. In order to accommodate this behavior for light, Einstein’s theory predicted that time and space would have to stretch or contract as someone traveled with increasing speed. And out of special relativity popped a cosmic speed limit: nothing could ever exceed the speed of light.

Relativity is a cornerstone of all of modern physics, and we have no reason to doubt it – no one has ever observed an object moving faster than light. There’s actually a minor clarification necessary here: Einstein’s speed limit is the speed of light in a vacuum. Light slows down when it moves through a material like water or glass, and then it’s perfectly possible to exceed this reduced speed of light – up to its speed in a vacuum, of course. Anything moving faster than light in water or glass produces the luminous equivalent of a sonic boom, called ?erenkov radiation. It’s what gives underwater nuclear reactors their attractive blue glow.

But about that warp drive…

Of all of the attempts to wiggle out of Einstein’s speed limit, probably the most plausible is theoretical physicist Miguel Alcubierre’s “warp drive”. Alcubierre’s proposal doesn’t violate the cosmic speed limit – it goes around it. Try filling a greasy frying pan with water and then put a drop of soap into the pan. The grease will fly away to the sides of the pan. 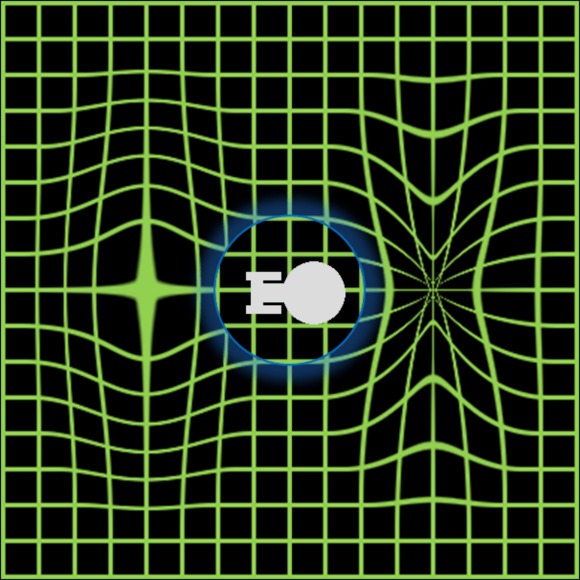 A visualization of a warp field. The ship rests in a bubble of unaltered space, while what’s in front contracts and what’s behind stretches. Image credit: Trekky0623

Alcubierre’s warp drive does the same thing with space itself. Alcubierre showed that by a suitable distribution of matter, you can shrink space in front of your spaceship and stretch it behind the spaceship, creating a small bubble around the ship that moves as fast as you like. Because space is contracting in front of the ship, the ship wouldn’t officially be moving faster than the speed of light. In fact, the ship would actually be at rest relative to the warp bubble, and the people inside the ship wouldn’t even feel any acceleration. Talk about a smooth ride!

There’s just one tiny problem…. Alcubierre’s space warp can only be generated by violating something called the “weak energy condition.” Scientists can’t prove that the weak energy condition is always true, but any violation would produce a lot of strange things, like negative energy densities, and possible wormholes or time machines. Cool – sign me up for that! But we’ve never seen any actual violations of the weak energy condition. So the Alcubierre warp drive occupies a kind of physics twilight zone – not absolutely ruled out, but not very plausible, either.

So how will humanity ever reach the stars? The door marked “faster-than-light travel” has been slammed in our face and welded shut. We’ll have to sneak in some other way. Get to work!

Robert Scherrer is Professor and Chair of Physics and Astronomy at Vanderbilt University.