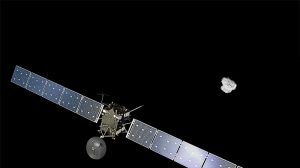 Artist concept of Rosetta spacecraft approaching comet 67P/Churyumov-Gerasimenko. The comet image is real, and was acquired by Rosetta on August 2, 2014, from a distance of about 300 miles (500 km). Spacecraft and comet not to scale. Image via ESA.

Thank you! Your submission has been received!
Oops! Something went wrong while submitting the form.
END_OF_DOCUMENT_TOKEN_TO_BE_REPLACED