A telescopic camera on a Mars orbiter caught these 8 dust devils in a single afternoon. 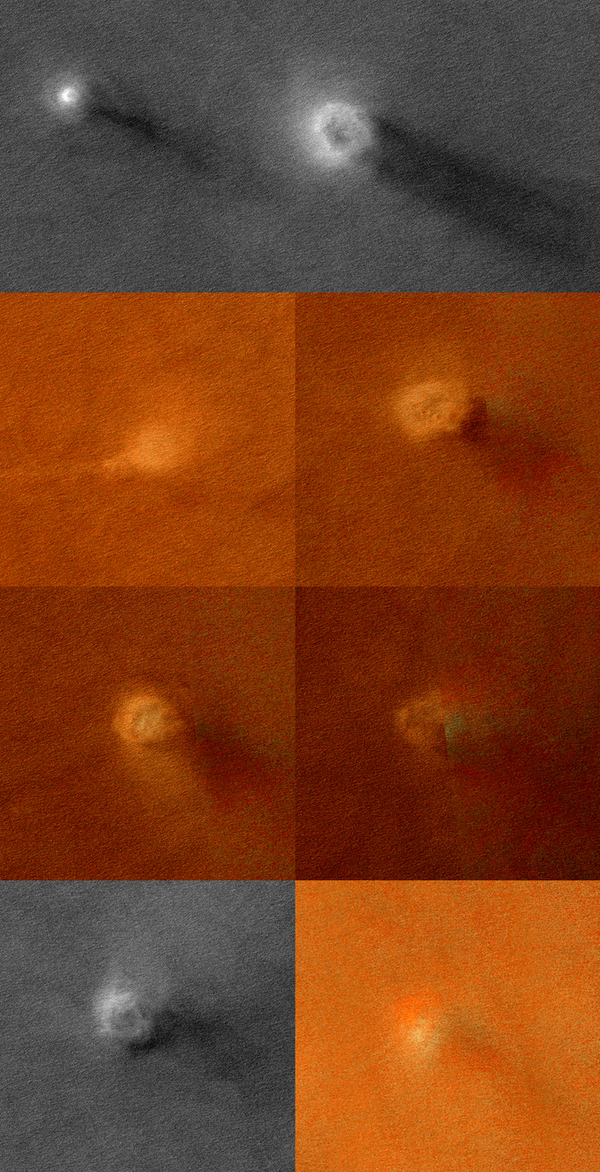 Eight dust devils on Mars, seen from orbit by the HiRISE telescopic camera on the Mars Reconnaissance Orbiter. Image via HiRISE.

A team of Mars-watchers at the University of Arizona’s Lunar and Planetary Laboratory released this image this week (November 4, 2015). It’s a family portrait of eight dust devils on Mars, all caught in a single afternoon by the HiRISE camera riding on NASA’s Mars Reconnaissance Orbiter. This camera routinely captures breathtaking images of Mars. Paul Geissler of the HiRISE team wrote at their website:

On an early fall afternoon in Ganges Chasma [a deep canyon at the eastern end of the vast Valles Marineris system on Mars], we managed to capture a cluster of eight dust devils … They’re together on a dark sandy surface that tilts slightly to the north, towards the sun.

Both of these factors help warm the surface and generate convection in the air above. The surface is streaked with the faint tracks of earlier dust devils …

He said the two dust devils in the top of the image are spaced only 250 meters (820 feet) apart. Notice their shadows! Geissler added:

These two have quite different morphologies. The bigger one (on the right) is about 100 meters in diameter and is shaped like a doughnut with a hole in the middle. Its smaller companion is more compact and plume-like, but it too has a small hole in the center, where the air pressure is lowest. It may be that the smaller dust devil is younger than the larger one.

He also said the row of four dust devils – in the middle of the color strip – are separated by about 900 meters (about 1,000 yards) from one another.

By the way, HiRISE stands for High Resolution Imaging Science Experiment. It’s a $40 million camera – the largest aperture reflecting telescope ever sent on a space mission.

Read more about marching dust devils on Mars, at the HiRISE website. 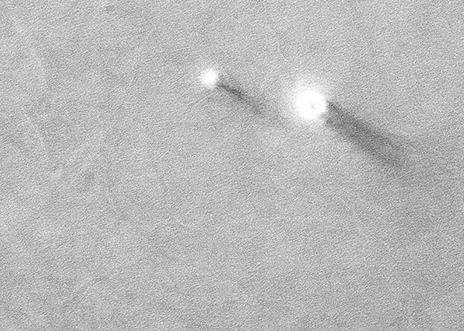 This image – of the top two dust devils in the strip above – shows their shadows more clearly. Image via HiRISE.

Bottom line: Family portrait of 8 dust devils on Mars, captured in a single afternoon by the HiRISE telescopic camera on the Mars Reconnaissance Orbiter.

Read more about the HiRISE camera