Asteroid 2017 GM is one of the 10 closest asteroids known so far to sweep past Earth, and then keep going. At its closest, it was less than 1/20th of the moon’s mean distance. 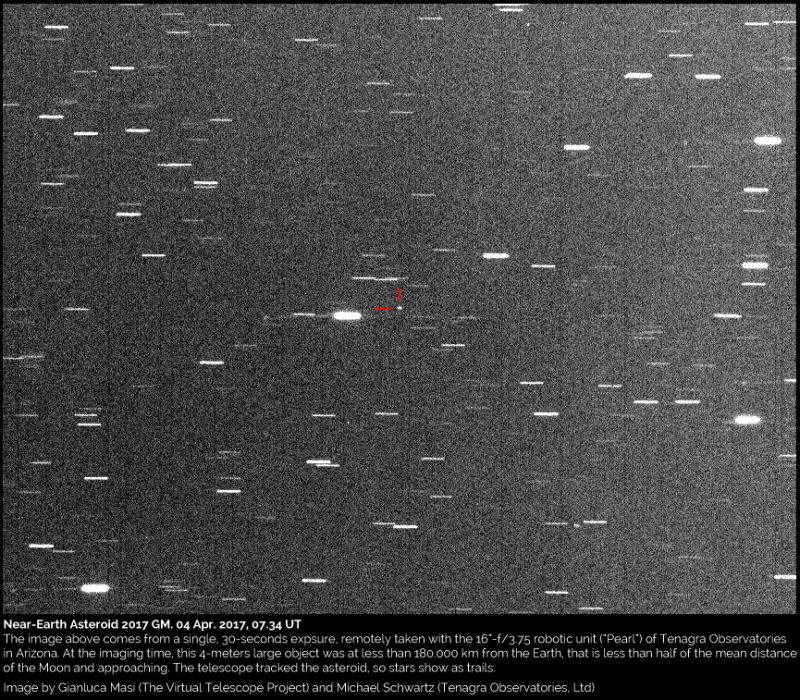 View larger. | Image of asteroid 2017 GM, captured this morning (April 4, 2017), while the asteroid was approaching its closest point to Earth. Taken by Gianluca Masi and Michael Schwartz, as part of a cooperation between Tenagra Observatories, Ltd., in Arizona and the Virtual Telescope Project in Italy.

We captured 2017 GM while it was safely approaching us. For this, we remotely used a telescope in Arizona, made available to the Virtual Telescope by Tenagra Observatories, Ltd. Above is an image coming from a single 30-seconds exposure, unfiltered, taken with the 16?-f/3.75 Tenagra III (“Pearl”) unit. The robotic mount tracked the fast apparent motion (150?/minute) of the asteroid, so stars are trailing. The asteroid is perfectly tracked: it is the sharp dot in the center, marked by two red lines.

It is among the 10 known asteroids making the closest approach ever.

The observatory is placed at 4,265 feet (1,300 meters) above the sea level, in the Sonoran desert, providing one of the best skies in the world. This image was taken as part of a cooperation between the Virtual Telescope Project and Tenagra Observatories, Ltd., which will be announced soon.

Help support EarthSky as an independent voice for science!

Bottom line: Photo from Virtual Telescope Project and Tenagra Observatories of 2017 GM, an asteroid that is sweeping extremely close to Earth on April 4, 2017.