A new study from researchers in the Netherlands shows how scientists can detect exoplanets orbiting red dwarf stars, and learn about their environments, from the radio waves generated by auroras on those worlds. 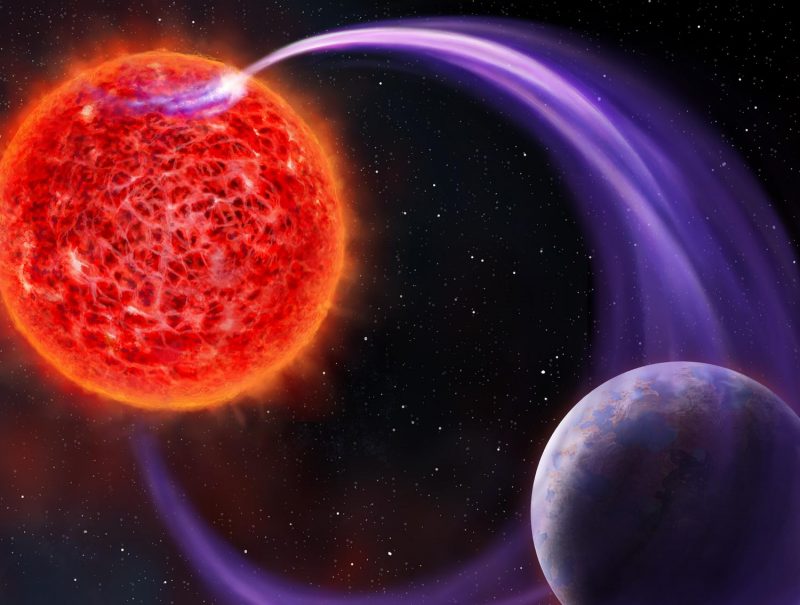 Artist’s concept of the atmosphere of a rocky planet interacting with the strong magnetic field of its nearby red dwarf star. This would create auroras in the planet’s atmosphere powerful enough for their radio waves to be detected from Earth. Image via ASTRON.

Exoplanets orbiting distant stars are hard to detect, but there are several ways to do it. The most popular method is to watch for a dip in a star’s light when an exoplanet transits in front of it. Other exoplanets are found via a tiny shift in a star’s movement through space, caused by the tug of an exoplanet’s gravity. Rarely, some exoplanets are found via direct imaging. Now there’s another novel technique that scientists are testing: finding radio waves from auroras caused by interaction between a planet and its star, red dwarf stars in particular. And now scientists using this new technique have their first candidate exoplanet.

Using the Low Frequency Array (LOFAR) radio telescope, scientists in the Netherlands have detected unusual radio waves coming from the nearby red dwarf star GJ1151. These radio waves are just what would be expected from auroras on a planet, caused by the interaction of the star and a strong magnetic field around a planetary body.

The intriguing peer-reviewed findings were published in Nature on February 17, 2020.

Harish Vedantham, the lead author of the study and a Netherlands Institute for Radio Astronomy (ASTRON) staff scientist, said in a statement:

The motion of the planet through a red dwarf’s strong magnetic field acts like an electric engine much in the same way a bicycle dynamo works. This generates a huge current that powers auroras and radio emission on the star.

Basically, the radio waves generated by auroras on a planet could be considered evidence that the planet exists, even if it hasn’t been detected yet by other methods. For this study, that would be planets orbiting red dwarf stars, since they have stronger magnetic fields that could generate auroras powerful enough to be detected. 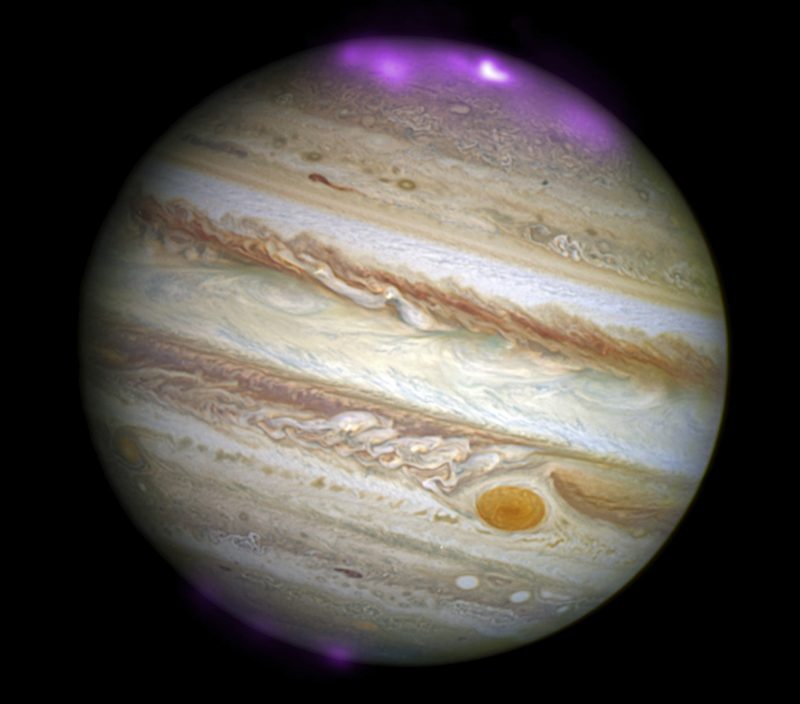 Auroras at the poles of Jupiter on October 2, 2011. This image is a composite of data from the Chandra X-ray Observatory and the Hubble Space Telescope. Similar auroras would be more powerful on planets orbiting close to red dwarf stars and could be detected by their radio waves. Image via NASA/ CXC/ UCL/ W. Dunn et al./ STScI/ Sci-News.

This doesn’t work in our own solar system, as the sun’s magnetic field is weaker and the currents generated in planets’ atmospheres are therefore not as strong. According to Joe Callingham, co-author of the study:

We adapted the knowledge from decades of radio observations of Jupiter to the case of this star. A scaled up version of Jupiter-Io has long been predicted to exist in the form of a star-planet system, and the emission we observed fits the theory very well.

The researchers now want to look at other red dwarfs for similar emissions. Many exoplanets have already been found orbiting red dwarfs, and red dwarfs are the most common type of star in our galaxy. It stands to reason then that many more exoplanets are waiting to be found around these stars. According to Callingham:

We now know that nearly every red dwarf hosts terrestrial planets, so there must be other stars showing similar emission. We want to know how this impacts our search for another Earth around another star. 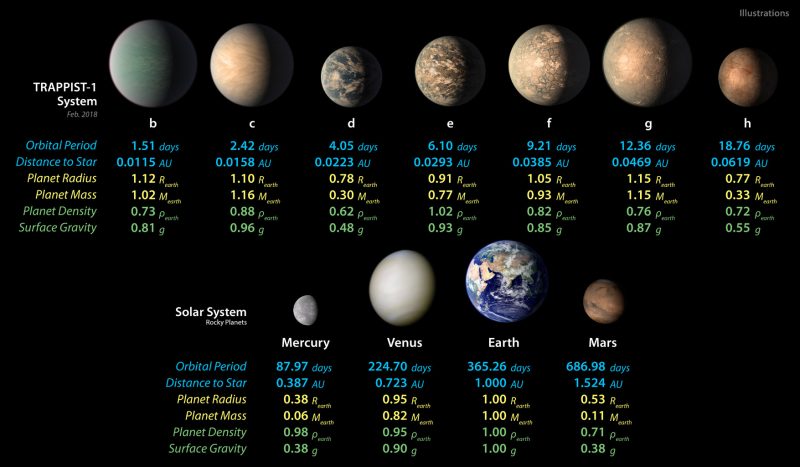 Many planets orbiting close to red dwarf stars would likely be uninhabitable due to the strong solar radiation. But not all. The TRAPPIST-1 system has at least seven Earth-sized rocky planets, of which at least three are thought to be potentially habitable. This illustration compares them (artist’s concepts) to the four rocky planets in our solar system. Image via NASA/ JPL-Caltech.

To do this, the researchers will use images from the ongoing survey of the northern sky called the LOFAR Two Metre Sky Survey (LoTSS), also called the LoTSS wide area survey. Tim Shimwell, co-author of the study, said:

With LOFAR’s sensitivity, we expect to find around 100 of such systems in the solar neighborhood. LOFAR will be the best game in town for such science until the Square Kilometre Array comes online.

Not only could this be a unique new way of detecting exoplanets, it could also help to better understand the environment of those planets. According to Vedantham:

The long-term aim is to determine what impact the star’s magnetic activity has on an exoplanet’s habitability, and radio emissions are a big piece of that puzzle. Our work has shown that this is viable with the new generation of radio telescopes, and puts us on an exciting path.

For many planets orbiting red dwarfs, habitability may be severely compromised. Red dwarfs, with their intense magnetic fields, generate powerful solar radiation, which can strip the atmospheres away from planets that are too close, rendering them uninhabitable, at least on the surface. But not all planets will necessarily suffer that fate, and there should still be planets that are far enough from their red dwarf stars to avoid that problem, while also being not too far away, allowing them to possibly have liquid water. 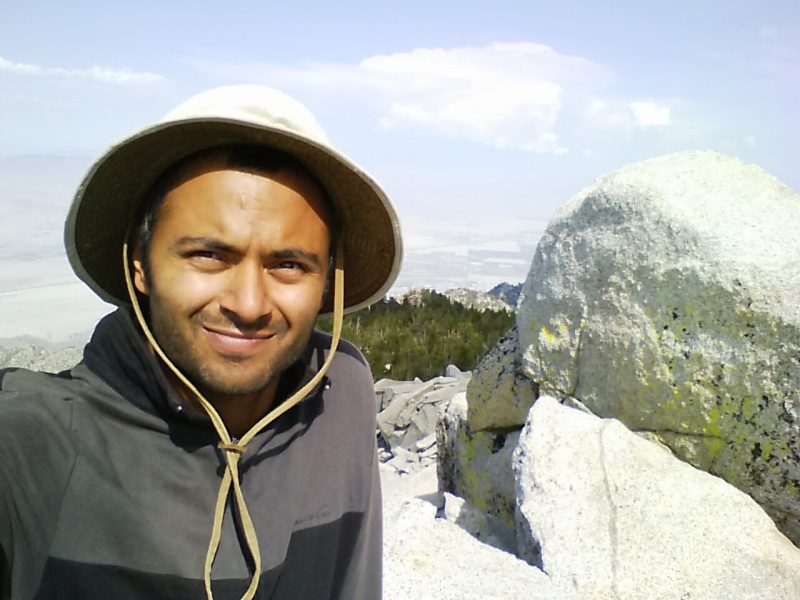 Harish Vedantham at ASTRON, lead author of the new study. Image via ASTRON.

The TRAPPIST-1 system is a good example of this. There are at least seven Earth-sized rocky worlds orbiting this red dwarf, and at least three of them are thought to be potentially habitable with the possibility of having liquid water on their surfaces. It will be very interesting to see what further study of these worlds reveals.

Detecting planetary auroras by the radio waves they emit will be an exciting new way to find and study exoplanets, including ones that may be missed by other methods. Stay tuned!

Bottom line: A study from the Netherlands shows a new way scientists can detect exoplanets from the radio waves generated by auroras on those worlds.