The length of an exoplanet’s day has been measured for first time.

Planet Beta Pictoris b, 63 light-years away, is 16 times larger and 3,000 times more massive than the Earth, yet a day on the planet only lasts 8 hours. 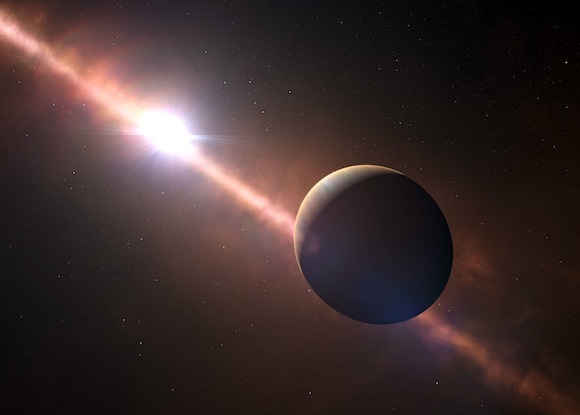 Observations from ESO’s Very Large Telescope (VLT) have, for the first time, determined the rotation rate of an exoplanet. Beta Pictoris b has been found to have a day that lasts only eight hours. This is much quicker than any planet in the solar system — its equator is moving at almost 100 000 kilometers per hour. This new result extends the relation between mass and rotation seen in the solar system to exoplanets. Similar techniques will allow astronomers to map exoplanets in detail in the future with the European Extremely Large Telescope (E-ELT).

Exoplanet Beta Pictoris b orbits the naked-eye star Beta Pictoris, which lies about 63 light-years from Earth in the southern constellation of Pictor (The Painter’s Easel). This planet was discovered nearly six years ago and was one of the first exoplanets to be directly imaged. It orbits its host star at a distance of only eight times the Earth-sun distance (eso1024) — making it the closest exoplanet to its star ever to be directly imaged.

Using the CRIRES instrument on the VLT, a team of Dutch astronomers from Leiden University and the Netherlands Institute for Space Research (SRON) have now found that the equatorial rotation velocity of exoplanet Beta Pictoris b is almost 100 000 kilometers per hour. By comparison, Jupiter’s equator has a velocity of about 47 000 km per hour, while the Earth’s travels at only 1700 km per hour. Beta Pictoris b is more than 16 times larger and 3000 times more massive than the Earth, yet a day on the planet only lasts 8 hours.

“It is not known why some planets spin fast and others more slowly,” says co-author Remco de Kok, “but this first measurement of an exoplanet’s rotation shows that the trend seen in the Solar System, where the more massive planets spin faster, also holds true for exoplanets. This must be some universal consequence of the way planets form.”

Beta Pictoris b is a very young planet, only about 20 million years old (compared to 4.5 billion years for the Earth). Over time, the exoplanet is expected to cool and shrink, which will make it spin even faster. On the other hand, other processes might be at play that change the spin of the planet. For instance, the spin of the Earth is slowing down over time due to the tidal interactions with our moon. 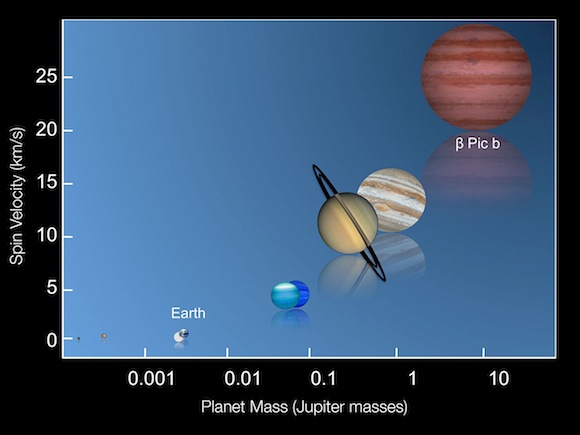 The universal relation between mass and rotation speed of planets

The astronomers made use of a precise technique called high-dispersion spectroscopy to split light into its constituent colors — different wavelengths in the spectrum. The principle of the Doppler effect (or Doppler shift) allowed them to use the change in wavelength to detect that different parts of the planet were moving at different speeds and in opposite directions relative to the observer. By very carefully removing the effects of the much brighter parent star they were able to extract the rotation signal from the planet.

“We have measured the wavelengths of radiation emitted by the planet to a precision of one part in a hundred thousand, which makes the measurements sensitive to the Doppler effects that can reveal the velocity of emitting objects,” says lead author Ignas Snellen. “Using this technique we find that different parts of the planet’s surface are moving towards or away from us at different speeds, which can only mean that the planet is rotating around its axis“.

This technique is closely related to Doppler imaging, which has been used for several decades to map the surfaces of stars, and recently that of a brown dwarf [8] — Luhman 16B (eso1404). The fast spin of Beta Pictoris b means that in the future it will be possible to make a global map of the planet, showing possible cloud patterns and large storms.

“This technique can be used on a much larger sample of exoplanets with the superb resolution and sensitivity of the E-ELT and an imaging high-dispersion spectrograph. With the planned Mid-infrared E-ELT Imager and Spectrograph (METIS) we will be able to make global maps of exoplanets and characterize much smaller planets than Beta Pictoris b with this technique”, says METIS principal investigator and co-author of the new paper, Bernhard Brandl.